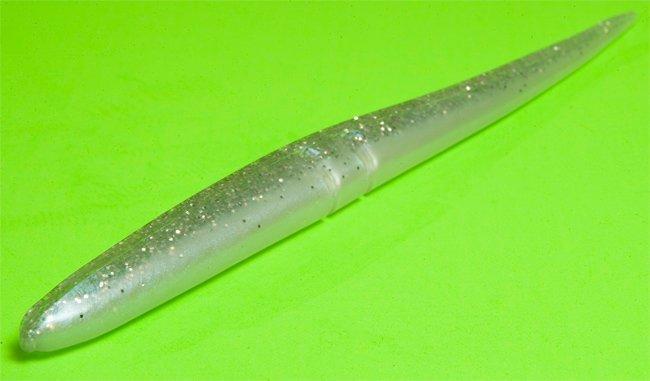 Inching closer to our top 10, we find the Lunker City Slug-Go soft jerkbait holding down the No. 13 spot on our list. This straight darter shaped plastic really changed how plastics were viewed.

In our mind their are two types of artificial lures from a fish’s standpoint. There are contact baits and there are reaction baits. Lures like plastic worms and jigs are contact baits. They are subtle, act like prey inching along the bottom and the fish will nose up to them and study them before deciding to eat them.

Reaction baits on the other hand shake, rattle and roll by the bass and often don’t give them enough time to weigh the pros and cons of striking. The bass just grabs the lure out of sheer instinct or anger. They react to the rattle and flash and strike.

When the Slug-Go hit the market, it was the first plastic bait of its kind to change the way plastics were viewed. An angler could now make this plastic bait duck and dart and slow sink like a dying shad and elicit a “reaction” impulse from the bass. When the lure hit the market in the middle of the 1980s, it was a little slow to catch on and then it seemed like after a few tournaments were won on it, it became the hottest selling plastic on the market.

It spawned a whole class of soft jerkbaits that were eliciting a reaction up in the water column instead of locked on the bottom or right on top floating. Anglers were able to target bass in the middle of the water column more effectively with these plastics.

The Slug-Go is a little harder to find these days as the market is inundated with soft jerkbaits now. But it still catches fish just like it did back then and it’s dynamite for other species beyond just bass.

For its influence on soft reaction baits including later developed stickbaits, we ranked the Lunker City Slug-Go No. 13 on our list of Top 20 Most Influential Bass Fishing Lures.