Bill Lewis has a long standing reputation of building a durable baitfish-like crank and wind bait that works on multiple species. Rat-L-Traps can be fished deep and shallow, and even a novice can catch fish on them. That unique rattle has been a mainstay for anglers for decades. It sounds like a coffee can filled with rocks, and curious fish have to check them out.

Many anglers probably don’t know they also build a Knock-N-Trap with a unique sound for their lipless lineup. Instead of the high-pitch rattle we are all familiar with, the Knock-N-Trap combines that sound with a one-knocker that is a deeper pitch. The combination rattles in this bait make it an excellent choice for fishing deep water and pumping it off the bottom much like stroking a jig. A lot of the strikes come on the fall and that is when the one-knocker is at its best. When pulled, both rattle chambers work in concert.

The Knock-N-Trap extended the line-up for Bill Lewis but more importantly opened the door the anglers on highly pressured lakes where the regular Rat-L-Trap was used extensively. The shape remained the same but the sound was different. 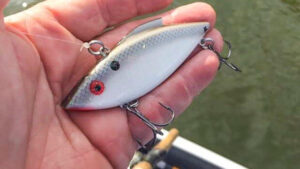 I have been chasing bass for a long time, and without a doubt, subtleties can be huge difference makers. Lighter line, heavier line, marking braid, smaller baits, bigger baits, sounds or color selection are all tweaks that can not only make a difference in numbers of fish caught but also the size of the fish. The smallest difference can be huge, and sound plays a big role at times too. The difference is not louder, in my opinion, but it seems that a different sound can sometimes produce more bites.

I have been throwing the Knock-N-Trap on bluff walls and deep channel swings casting mainly perpendicular to the bank. Unless heavy cover is on the bank, I let the bait settle to the bottom, and the first part of the retrieve is to rip it up with a quick twitch of the rod. It seems that most bites come on the fall. Although none of the fish I have caught doing this have been giants, I have been getting keeper size fish on what had been before an abysmal effort. No matter what bank, no matter how deep, the fish bit this bait.

I have been throwing the 3/4-ounce model in shad colors like Sexy West and Silverado and can hardly wait to give Toledo Gold and Rayburn Red Craw a shot as the water cools. This bait casts a country mile and doesn’t seem to be adversely impacted by wind. 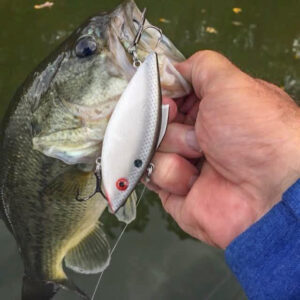 Because of the cover, the weight of the lure and distance of the casts I have been making, I have been throwing it on a 7-foot, 3-inch MH Manley Platinum rod, a Team Lews LITE 7.5:1 reel and 15-pound Seaguar Abrazx fluorocarbon line. Reel speed is crucial for this technique as many times the line is slack when you get the hits and catching up to the fish quickly is paramount to landing them.

Lipless baits have a reputation for losing fish but this didn’t seem to be the case with this type of retrieve.

The Bill Lewis Knock-N-Trap is available at TackleWarehouse.com and retailers that carry Bill Lewis lures.