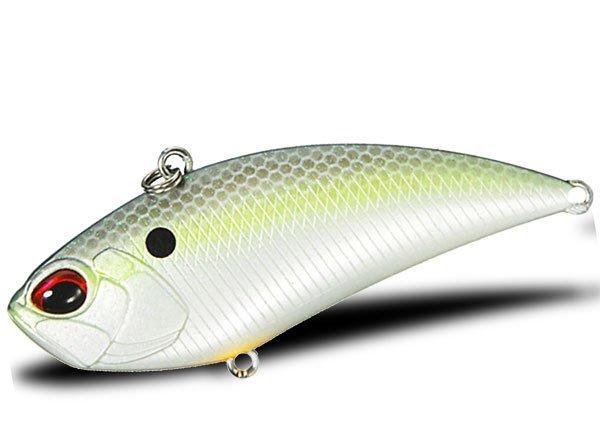 Every now and then I have those special days with a new product that makes reviewing new fishing tackle a lot of fun. I had one of those days with the new Duo Realis G-Fix Vibration Tungsten Lipless Crankbait during my review on the first use of the bait in the spring prespawn period.

Duo sent me a couple of the baits in shad pattern to try. I took them out the first day just to check castability, durability, usability and the usual stuff you want to know when you first get a new fishing lure. What ensued was a beat down, much of which was caught on film. I wish I had more of the fish on film to show off, but I was playing with a new camera and thought it was recording several times when it really wasn’t. But I got enough on film to show you how well the lipless bait worked.

Lipless crankbaits are like any other bait. You will have your favorites. But every now and then a new one makes a permanent home in the bait collection.

Here are several aspects of the Duo Realis G-Fix Vibration Lipless Crankbait that will appeal to avid bass anglers:

The bait was reengineered to add the G-Fix name to it. It’s more than just a name. It’s the addition of properties that avid anglers in Japan thought were necessary to make the bait appeal to bass in more situations than just straight cast and wind applications.

One of the key engineering points was the balancing of the bait for a perfectly horizontal orientation on the fall and pause. I found this to be key in my testing as I caught several bass that were obviously following the bait and when I killed it and let it fall, the subtle shimmy drew the followers in for a bite.

The other result of this balancing is the bait has been surprisingly snag resistant with its orientation on a retrieve. That’s not to say you can throw it in a brush pile and expect it to come out clean. But I bumped it along in very shallow rock and was able to catch numerous bass on it without getting stuck. Some times fishing a 3/4 ounce lure in shallow water can be dangerous.

This is one of the narrowest lipless crankbaits that rattle that we’ve seen. Some folks I’ve heard mistake it for a blade bait when they see it. It’s not a blade bait but it does have some of those positive qualities.

The G-Fix Vibration Tungsten Lipless crankbait casts a mile and doesn’t sail or hook or slice on a long cast. And once it hits the water it starts slicing and rattling immediately. It doesn’t have to “get started” like some baits in its class. The narrow profile is a big key in that aspect of it’s action.

The original Vibration 68 weighed about 1/2 ounce. The new Vibration 68 G-Fix weighs roughly 3/4 ounce. The added weight was to give the angler more control in big open water areas, in high winds, on large reservoirs where you want to cover a lot of water quickly with long casts. It’s geared towards the angler who fishes in a hurry looking for fish all over a big body of water.

I was able to throw past my backing on several casts with this bait. Probably the farthest I’ve been able to cast a lure under an ounce.

New twists on an old sound

One reason I have several different lipless crankbaits in my box, is that I think pitch and tone can matter to bass with lipless baits. I think bass can become conditioned to the sound of rattling lures. So one that maybe sounds a little different than the masses can often be a good thing. Some days it really doesn’t matter what the sound is. Just that it has it. I like the high pitched sounds that come from the 11 ball bearings inside.

I have one of these that is pretty beat up. Of course it’s caught a bunch of bass and been drug along rocks for days. The nose is grind down a little and a little paint lost there. But it’s not chipping, cracking or showing any signs of deterioration. In fact it seems that the wear and tear is very minimal. Guys sometimes don’t understand how the paint wears off their jig or crankbait on the first trip.

Go out in your driveway, spray it down with the hose. Now drag your jig on the concreted for about 4 hours. Let me know if there is any paint on it. The bottom of most rocky reservoirs is a lot rougher than your driveway. What you want in a good paint job is one that rubs off after repetitive abrasion without chipping or cracking. It should just sort of sand off. That’s what we found with the Duo Realis Vibration 68 baits.

I didn’t change the hooks on this bait. They worked extremely well. In fact I hooked several bass that swiped at my bait in muddy water without really being able to see it and I hooked them in the belly, outside of the head and hard scaly parts of their exoskeleton. That’s the testament of a lure that hooks well. They make a pass at it and get hooked.

Check out our video here of the Duo Realis in action.

To order some or take a look at the available colors, check Tackle Warehouse here or other retailers near you that carry Duo Realis USA products. 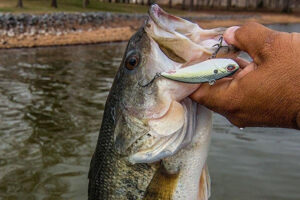