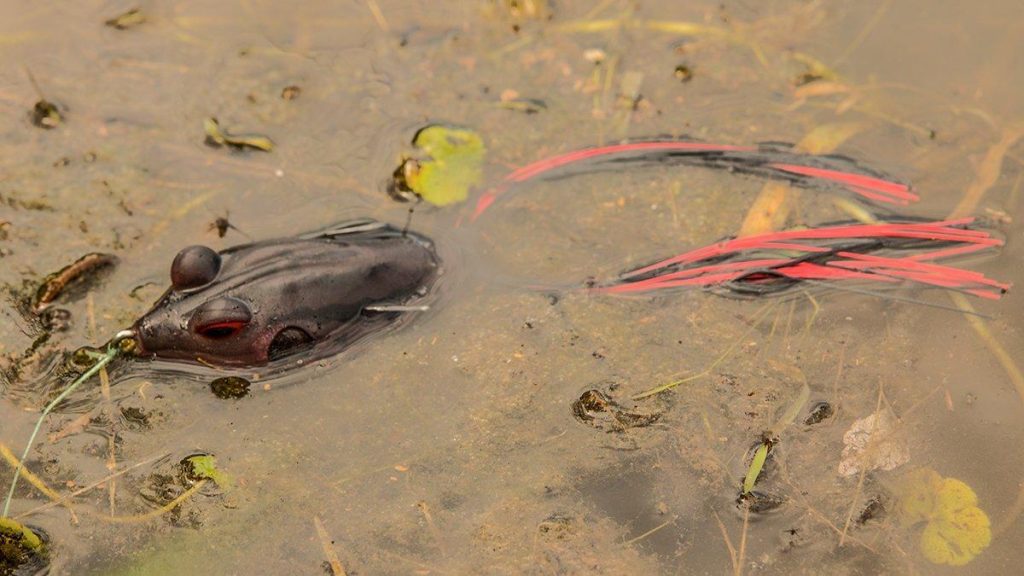 Every red-blooded angler loves topwater frog fishing. These unique lures give us the unique ability to make bass react in the thickest of cover, resulting in outrageous blowups and most importantly, huge catches. Even when the conditions aren’t exactly ideal for this technique, I often have a hard time putting a frog down in favor of other lures. It’s that fun.

To my knowledge, I’ve tested nearly every hollow-bellied frog on the market and after spending a lot of time fishing with the Terminator Walking Frog, I’ve noticed some unique characteristics that make it an excellent choice for topwater fishing in heavy cover.

The Terminator Walking Frog isn’t your average-sized frog. Weighing 11/16-ounce and measuring 3 inches, this is a much larger frog than what many anglers are accustomed to. Throughout my testing, this bulky profile has given me two very distinct advantages.

Whether you’re casting this frog into the wind or skipping it underneath docks and overhangs, it casts excellently. I’ve been using it with 65-pound braided line and a medium-heavy casting rod and the results have been nothing short of impressive. 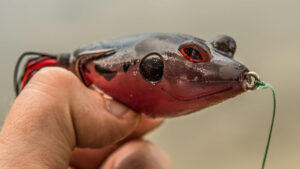 Because I’m able to cast this frog so far, it’s been very effective when targeting cruising bass in shallow, clear water. The key to catching these fish is stealth and with very little effort, I’m able to keep my boat a long way from the fish and cast to my monofilament backing every time. I can lead the fish by 20 yards and put it right in their path in order to make them react.

I’ve noticed that a lot of anglers become frustrated when learning to skip hollow-bellied frogs and I believe it’s most often due to two factors: Their rod is too heavy or their frog is too light. The Terminator Walking Frog solves the second half of that equation. It’s a heavy frogâ€”you’ll be able to feel its increased weight on your initial cast. This allows your rod to load easily on the back cast in order to facilitate a nice, clean skip without catching too much water. It has quickly become one of my favorite frogs for fishing my area’s large population of boat docks.

Equally effective in both open water and in thick vegetation

Simply put, this frog is probably the easiest to walk out of each one I’ve tested. I’ve put it in the hands of complete beginners and watched them walk it across the surface without any issue. If you’re a savvy frog angler, you’ll know exactly why this is so important. 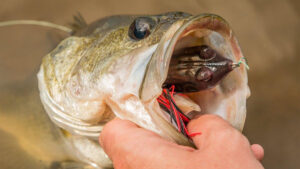 I always look for frogs that will walk side to side without moving to far forward. This allows me to keep it in the prime strike zone for an extended period of time, increasing my chances of getting a big bite. Put a cinder block in shallow, clear water and imagine it’s the strike zone of a big bass. Now cast to it with the Terminator Walking Frog, and it will walk back and forth about 5 or 6 times before exiting the strike zone. This frog’s walking ability is shocking.

If you like to fish matted vegetation with frogs, this will also be a good choice. Its added weight allows the frog to push a lot of water with each twitch, giving the bass a solid target from underneath. 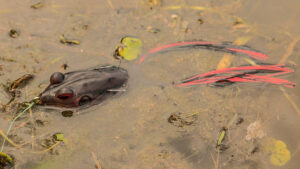 For years, professional anglers have been putting weights inside their frogs to achieve this bulging action, but that’s not necessary with the Walking Frog. It’ll catch ’em anywhere from open water to the nastiest sludge on the lake.

The major knock anglers have on frog fishing is their reputation for a less-than-stellar hookup ratio. There’s nothing worse than finally getting that big explosion and completely whiffing on the hookset. 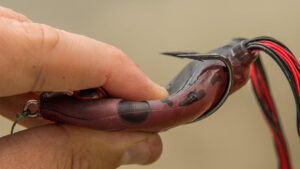 Throughout my testing, the Walking Frog has produced an extraordinarily high hookup ratio. I’m not waiting several seconds to set the hook, either; as soon as they pull it under, I’m swinging hard. I’ve caught a bunch of bass on this frog over the past year and have missed only a handful of bites.

I attribute this to the collapsibility of its plastic body; it doesn’t take much force to get the plastic out of the way of its sharp hooks. It’s not the softest frog you’ll find, but I actually like that because it holds up to fish catches quite well. I’ve yet to have one split or take on water. 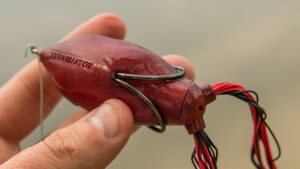 If you’re looking for a frog that’s totally ready to fish right out of the package, I suggest trying the Terminator Walking Frog. You don’t have to bend any hooks or trim any legs; there are no modifications necessary. While I’d like to see a wider array of color options, Terminator has covered the essentials and put together an awesome frog that will flat out catch ’em.

The Terminator Walking Frog is available at TackleWarehouse.com and other retailers that carry Rapala and Terminator products.