When late-winter hits and most fisheries become cold and muddy, fishing can get downright tough. These conditions usually prompt bass to concentrate into tight groups which makes them difficult to pinpoint. The best solution I’ve found through the years is to cover water at a fast and furious pace and the Strike King Red Eye Shad is an excellent option for this tactic.

I’ve used this lure for years with a lot of success. If the bass aren’t responding to subtle finesse presentations, this dude can make ‘em super mad—in a good way, of course.

The 1/2-ounce Red Eye Shad is 2 1/2 inches long and casts like a bullet. Whether I’m casting into the wind or with it, this lure doesn’t helicopter or spin while airborne—it flies straight, giving you incredible casting distance.

This is definitely an advantage this time of year because as I discussed, the bass aren’t very widespread. The Red Eye Shad lets allows you to put your trolling motor on high and cover ridiculous amounts of water. I’ve noticed that it tends to trigger the most aggressive fish in the school, which can act as a major clue to the rest of the school’s location.

As you retrieve it through the water, you’ll notice a more intense vibration coming from your rod tip. That’s not because it’s louder or heavier—it’s actually because it has a much wider swimming action when compared to similar lures. The top of the lure is very wide and tapers down to a skinny belly, which increases water displacement, which in my opinion, is extremely effective in muddy water.

We’ve had a rough winter with a bunch of precipitation, which has taken most finesse tactics out of the equation. The wide action and deeper rattling sound of the Red Eye Shad has been a big producer for me lately because the bass have no problem locating it with their lateral lines.

When you let the Red Eye Shad sink on a controlled-slack line, you’ll also notice an intense shimmy as it falls. Shad are dying on most fisheries right now and a freefalling Red Eye Shad is an awesome imitation of a struggling baitfish.

It’s easy to become limited in your use of lipless crankbaits—they don’t have a big bill to deflect cover, so certain models can be a big hassle when fishing around gnarly stuff. It’s important to remember, however, that cover holds head throughout the winter months, so it should never be avoided.

The Red Eye Shad does an outstanding job at resisting hang-ups and I believe it’s due to its nose design. It has a very wide, flat nose which allows it to swim nose-down. This swimming angle puts the hooks behind the lure, therefore protecting them from annoying snags.

When you collide the Red Eye Shad with a piece of cover, its flat nose promotes a great deflection. Instead of rolling over the cover and exposing the hooks, it glances to side—away from trouble. 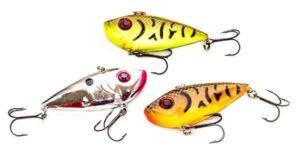 When you fish lipless crankbaits around submerged vegetation, it better have quality components. All the ripping, digging and slapping on the water puts a lot of stress on the split rings and if they’re not top-notch, they’ll bend in a heartbeat.

The Red Eye Shad’s split rings are very durable and stand up excellently to abuse. You can yank it through all the crud you can imagine without any worry of component failure. I’ve had some bad experiences with these kinds of failures in the past, but this lure helps put my mind at ease.

I’m also a big fan of its oval-shaped line tie. When tying knots on a round line tie, your line has a tendency to slide between the rings, causing you to cut it off and immediately retie. The Red Eye Shad’s line tie makes rigging a breeze and eliminates any unnecessary retying.

I also can’t help but think that this line tie promotes a better nose-down swimming action. It puts the pull-point a little close to the front of the lure, which causes its nose to dig and “tick” nearby cover which is often a major trigger for sluggish, coldwater bass.

If your local bass are stubborn like mine are, don’t overlook the effectiveness of the Red Eye Shad. If you cover a lot of water with it throughout the day, there’s a great chance you’ll trigger some solid schools of bass.

The Strike King Red Eye Shad is priced starting at $4.99 and available at TackleWarehouse.com. 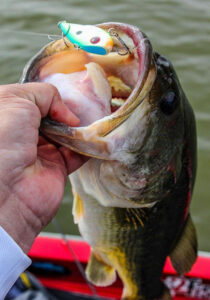