The market has been inundated with new topwater frog designs over the years. While some of them have turned into staples for bass anglers, many floundered and have been lost in the noise. Just when some of us were beginning to wonder if the industry had peaked in terms of hollow-bellied frog designs, this little jewel comes out of nowhere.

Professional angler and noted frog fisherman Fred “Boom Boom” Roumbanis teamed up with Stanford Baits to make an incredibly unique topwater frog. I’ve been lucky enough to test it for the last few months and I’m telling you: This frog is going to have the shallow-water anglers salivating. It addresses several common problems that we’ve all dealt with occasionally and it has proven to be a definite fish catcher.

I’ll show you what has impressed me most in the next few slides.

Yes… “Frogfur” is now a thing.

The first thing you’ll probably notice about the Stanford Baits Boom Boom Frog is the “Frogfur” on the topside of the bait. It may look a little odd, but it makes a noticeable difference in your hookup ratio. The Frogfur feels like the soft side of a Velcro strip and it plays a critical role when a big bass blows up on the Boom Boom Frog.

We’ve all experienced those huge explosions on a frog and been baffled when we totally whiff on the hookset. This Frogfur is designed to snag on the sandpaper-like teeth of a bass, which gives you just a little more time to execute a powerful hookset. When their teeth become tangled in this stuff, it makes it incredibly difficult for the bass to throw this bait or miss it on the initial strike. 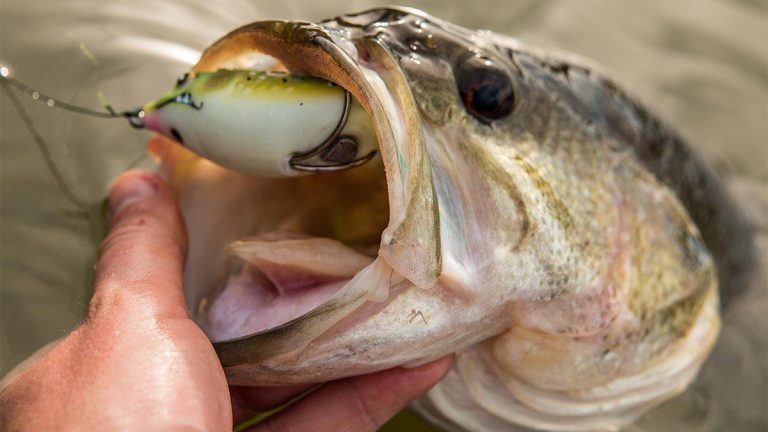 I’ve experimented with this Frogfur a lot because I figured this design feature would get a lot of attention. After the initial blowup, I’ve been letting the bass swim with it; no hooksets and no reeling on my part. On average, the bass are swimming with this frog for more than five seconds before they can break free from the Frogfur. When setting the hook, the bait is already pinned in the top of their mouths, which allows for outstanding hook penetration. I have not dumped a single bass throughout my testing. I have a feeling we’ll be seeing a lot more similarly designed frogs in the near future.

Initially, my biggest concerns with this Frogfur revolved around its durability. I’m happy to say, however, that it has stayed intact quite well. It’s not peeling off and it’s still as effective as it was the first time I used the Boom Boom Frog.

They aren’t playing around with these hooks

This frog comes standard with a Mustad Wide Gap Frog Hook and it definitely holds its own without any issues. I’ve been using 65-pound braided line throughout my testing and the hooks do flex just a little bit, but never bend or warp. The hook points remain remarkably sharp and I haven’t experienced any rolling whatsoever. I’ve gained a lot of confidence in this frog and I have no reservations rigging it on a stout setup and laying the wood to ’em in the thick stuff.

Flip it over – there’s more

The belly design of this frog is something I’ve been waiting for, to be quite honest. We always get caught up on what the top-side of the frog looks like, but I’ve never really understood it; the bass are looking at it from the bottom. I think the color schemes on the top help our confidence more than anything else.

The bottom of the Boom Boom Frog features a prominent eye in the front of the bait. As this frog slithers back and forth through thick cover, it gives a striking impression of a small, wounded baitfish or panfish. I’ve had some pretty spectacular blowups on this frog and while I can’t talk to the bass and ask ’em why they bit, I have a sneaking suspicion that this simple feature plays a big role. 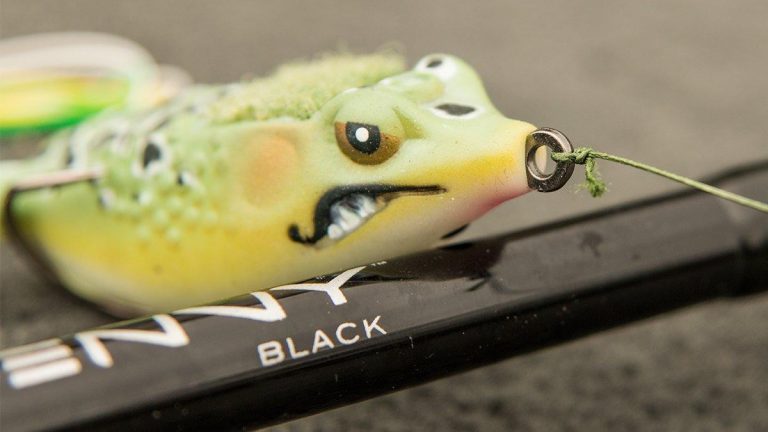 The line tie on this frog is probably the beefiest one I’ve ever seen, which should give anglers a little more confidence when it comes to aggressive hooksets. I’ve set the hook as hard as I can without any loss of structural integrity.

This frog’s action and fishability is also worth mentioning. It weighs 1/2-ounce and you can cast down to your backing without much effort at all. You can chug this frog and make it “scoot” through vegetation or you can easily walk it across open water and keep it in small strike zones for several twitches of your rod tip. It’s one of the easiest-to-walk frogs I’ve tested over the last several years, for sure.

Once the word gets out on these frogs, I genuinely think they’re going to become tough to find. There are a bunch of great frogs out there, but this one has just enough ingenuity to make some serious ripples in the topwater frog market. The folks who designed this frog definitely deserve a tip of the hat. I’ll be ordering more.

The Stanford Baits Boom Boom Frog is available at TackleWarehouse.com.