It seems like most reviews of mine the last few months has involved a topwater bass fishing lure of some sort and to be honest, I ain’t mad about it. As I’ve stated at the onset of several of those reviews, I love a good topwater bite. So testing some of these lures as a job is about as good as a dream can come true. Landing a Hershey’s taste-tester spot might edge it out by a nose but there’s no threat of that becoming a reality anytime soon. So I’ll just keep chucking, winding and reviewing these baits.

In reality, the topwater reviews are likely winding down for the year as that bite will fade away over the next couple months. But in the interim, there’s still time to get a few more bites up top so today we’re going to take a look at the Z-Man Leap FrogZ Popping Frog. I recently reviewed the Walking Frog counterpart in the Leap FrogZ lineup and was pretty pleased with it. So I was excited to get my hands on the Popping Frog and see how Z-Man faired on their first shot at this lure type. Here’s what I found.

Set apart by its size and shape

The hollow body frog market is getting fairly saturated. Almost every lure company focused their energy for awhile on making a spinnerbait, squarebill or various type of jig. But now, it seems as though that push has made its way into the hollow body bait market, with several companies coming out with frogs and other hollow body baits. But this isn’t a bad thing. There have been some great baits in this market for decades but a little competition always makes things better.

What I did notice, however, at first sight of the Leap FrogZ Popping Frog is that it stands out in a crowd. Some of the new frogs look like direct knockoffs or at least close copies of a few of the industry leaders. But Z-Man’s take on a popping frog has a deeper V, thinner body and comes in two sizes that land in the gaps created by several of the other popping frogs out there. I tested out the 2 1/4-inch version, which is a little smaller than a lot of the mainstream popping frogs that measure around 2 1/2 inches. And the larger offering from Z-Man comes in at 2 3/4 inches. In doing this, Z-Man kind of found a no-man’s land there as well, between what most would consider an average-sized popping frog and a lot the bigger versions that are offered by a few companies now. 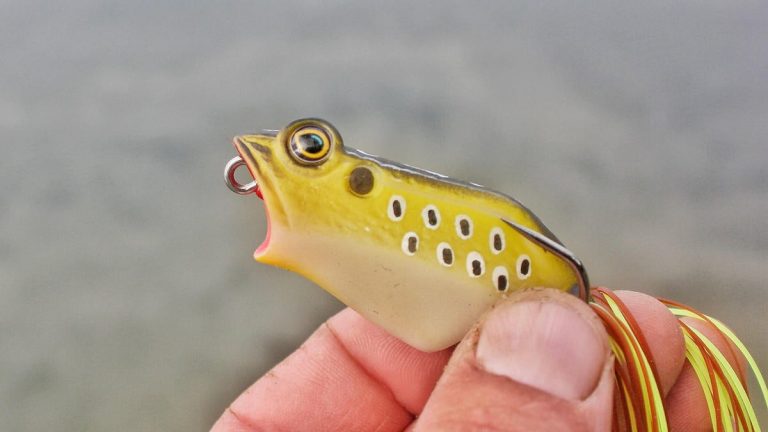 The front end of the Leap FrogZ is a little different compared to most popping frogs. It has a more aggressive cup to it, creating a pretty good chug on the retrieve. The bottom lip of the bait is shorter than the top and rounded which allows the bait to kind of dig into the surface of the water a little and then deflect the water off the top of the mouth to get the bait to spit a pretty good ways on the pop.

The line tie also seems a little higher in the mouth versus a lot of other frogs. The top lip comes together at a point and the line tie is kind of tucked up in it. This helps the mouth of the bait dig in when you twitch it with your rod tip down near the surface of the water. The line pulls down on the top lip and makes the Leap FrogZ an easy bait to work.

Good set of hooks, quality skirting and other details 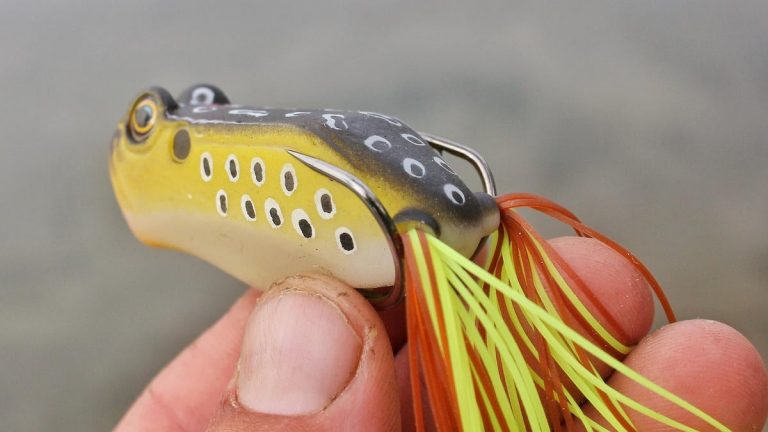 The most important component of any frog is the hook and the one Z-Man used here is a good one. I almost always have to bend the hooks up a little on a frog but Z-Man starts you off here with a nicely angled point. Having the hook pointed up a little increases your hookup ratio tremendously. And if you’re not familiar with the process of bending up a frog hook, you can certainly go too far and damage the integrity of the hook to the point it will open all the way up on a fish or even break. So it’s nice the Z-Man eliminated the need to modify the bait yourself in that way.

The trimmings of the bait are solid too. Quality silicone skirting ensures this bait will last several trips instead of melting and getting all sticky like some baits do with rubber skirting. The color schemes look good too with nice detail. It’s also available in three natural colors and a black option. To finish everything off, these frogs have big, realistic eyes.

All in all, Z-Man put together a quality popping frog for $7.99 which is not too shabby. I commend them for starting at the drawing board instead of simply duplicating an already-successful lure made by another company. That kind of stuff happens all the time now and really isn’t considered that big of a deal. But anytime someone does come up with something a little different, I like to congratulate them on their originality.

Obviously Z-Man didn’t invent the popping frog here and I wouldn’t even say they reinvented it. But they did bring to market a quality addition to a crowded lure category that stands upright in its own lane, for now at least. The uniqueness of this frog shows up in its tall sides which create a deep V and a little thinner body. In addition, Z-Man’s attempt to offer lengths that other companies overlooked helps this bait stand out. With a forward-leaning and aggressive mouth design, realistic color patterns and quality components, I’d certainly say this is a frog worth checking out.

The Z-Man Leap FrogZ Popping Frog is available at the following retailers: