In my opinion, there are few bass fishing baits more influential than the Lunker City Slug-Go.

When it was initially released in the 1980s, it was the first soft-plastic lure that could consistently elicit vicious reaction strikes from bass. Anglers didn’t flock to its unique design at first, but it soon became one of the best-selling plastics on the market after a few tournaments were won with it.

Fast-forward three decades and it’s just as effective as it once was. I’m still fishing it throughout much of the year in both large and small bodies of water. Whether you’re hunting spring, summer or fall bass, this bait is a bona fide staple that should be in everyone’s collection.

It’s super easy to use

Whenever I take beginners fishing, I have a Lunker City Slug-Go rigged for them. There are a lot of soft jerkbaits to choose from these days, but this one seems almost impossible to fish incorrectly.

It has a much longer glide than most of the other soft jerkbaits. You don’t have to wreck your forearms and twitch it like crazy—just soft, intermittent twitches of your rod tip send this bait darting from side to side. After each twitch, it keeps forward momentum quite well and beautifully imitates a dying or injured baitfish.

Hooksets are not a problem with this bait, either. For whatever reason, the large majority of the bass you’ll catch will nearly inhale it. A winding hookset is just fine in most instances, which is another reason it’s such a great bait for novice anglers.

I can remember walking the banks of creeks and rivers when I was younger, with nothing but a pack of 3-inch Albino Shad-colored Slug-Gos and a plastic baggie full of extra hooks in the back pocket of my swim trunks. I’d use a $40 rod and reel combo and throw it in any current seams within reach. I cannot tell you how many bass I fooled with that little setup.

Now that I’m older, I’ve stepped my tackle selection up a few tiers but the Slug-Go still comes everywhere with me. I keep them in both of my boats and even in the front door pocket of my truck in case I sneak off to a nearby farm pond.

Some might call it nostalgia, but I tend to disagree. Fond memories or not, bass just eat the dang thing.

This bait is quite a bit heavier than many other soft jerkbaits, which is a major selling point in my opinion.

If I’m walking the banks of a pond, I can bomb it into far-away pockets with light tackle. It also skips like a pebble, so it’s not necessary for me to wind up and make a dramatic cast to get it into tight places. I can simply flick my wrist and send it quietly skipping underneath overhanging trees.

For big-water fishing, I’m able to beef up my tackle and fish the Slug-Go on a medium-heavy casting setup with 12 to 15-pound line with no line management issues. This is a big deal when I’m skipping it underneath dock platforms and walkways, because I need the power to wrench those fish out of the cover quickly. 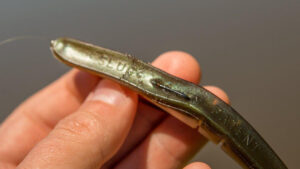 This is a very low-maintenance bass fishing bait. There’s no need to constantly adjust it between casts and even larger bass have a hard time tearing it up. It’s not uncommon to catch 5 or 6 bass on a single Slug-Go.

They’re priced starting at $5.29 per package, which may be a few cents higher than other competitors, but the durability and effectiveness make it a complete non-issue in my mind.

These will stay in my boat (and truck) for years to come. They catch a bunch of bass and last a long time, so they’re not going anywhere. If you’ve never used ‘em, I wholly believe you’re missing out.