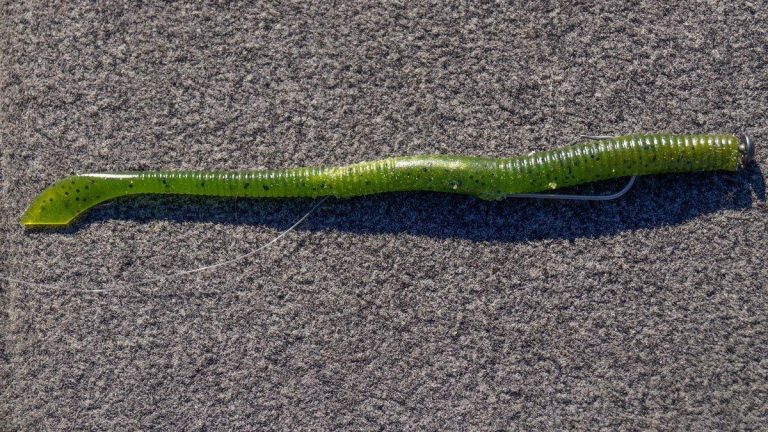 For most bass fishermen, tinkering with baits and rigs is just part of the job. Add some suspend dots to a jerkbait; dye the tail of your worm chartreuse. For legendary bait designed Gary Yamamoto, tinkering with tackle is not only a passion, it’s his livelihood. That’s what ultimately led him to create the Chicken Rig for bass fishing.

Yamamoto sees the fishing world a little different, a fact that has resulted in some of the most innovative baits and rigs in the game. He looked at a Bic pen and saw a Senko, turned a day of short striking fish into the Kut Tail worm, and introduced everyone to the bizarre but effective Double-Tailed Hula Grub – all staples in bass fishing now.

In addition to baits, Yamamoto has also long been an innovator when it comes to rigging his creations. In 2011, he broke the FLW Outdoors single day weight record for Lake Champlain with a 24-pound, 4-ounce stringer on his way to a second place finish in that year’s final FLW Tour Open. He caught the entire bag skipping docks with a Senko tail-weighted with a No. 7 finishing screw.

Fast forward to 2014, and he did it again. This time he rode his newest creation to a 5th-place finish at the Rayovac FLW Series event held on the Upper Mississippi in September.

The rig is a modification of the Neko rig (nail weighted Senko), but instead uses the new Yamamoto 7.75 inch Kut Tail worm. And we’re calling it the Chicken rig.

That name isn’t intended to insinuate that the Chicken rig is a cowardly bait, it’s because “backward wacky weighted Kut Tail” is a tongue twister; and it condenses down to BWWK, which any child under the age of four will tell you is the sound a chicken makes.

“In Japan, anglers are always trying new things,” Yamamoto said. “You have to use a lot of finesse to catch bass there, so most fishermen are very good at customizing their baits.”

His appreciation for the Neko rig’s bizarre fall and fish catching prowess led him to try it with a Kut Tail worm, and several months prior to the Rayovac event he had a friend from Japan in his boat for a day of fishing that truly demonstrated the rig’s potential.

“We were fishing rip rap, and I was fishing with a regular plastic,” Yamamoto said. “My friend picked up the Kut Tail rigged backwards and started catching all the fish behind me. That was with the little 6.5-inch worm. In tournaments we are specifically targeting 3-5 pound fish, so when we were developing the new 7.75 inch version of the worm. I upsized the rig and it works great.”

Rigging the Chicken rig is fairly simple. The key is to use a 4/0 or 5/0 straight-shank, worm hook and insert the point about an inch behind the egg sack of the Kut Tail. Once there, thread it on past the egg sack, pop the point out and flip it around just like you’re rigging a normal Texas rig.

When done properly, the hook will be about two thirds of the way down the bait, leaving an inch and a half of the meatiest part of the bait left and insert a standard drywall screw in that portion.

Yamamoto generally fishes the Chicken rig on medium heavy spinning tackle, using 15 to 20-pound braid as a mainline with a 16 or 20-pound Sugoi Fluorocarbon leader.

“The rig can be fished on a fairly heavy setup,” Yamamoto said. “The 7.75-inch Kut Tail is a big bait, so you need to have enough rod to handle it. Lots of people will probably fish it on baitcasting tackle as well, but I have always preferred spinning tackle.”

In the Rayovac event, Yamamoto was fishing the Chicken rig around bridge pilings, barge tieups, docks, rip rap, and other hard cover found right in the city of La Crosse. These are the types of places the rig excels.

“I like to cast it out there and let it fall on slack line,” Yamamoto said. “Once it hits bottom, I’ll lift it up a couple feet and let it drop again. Once I do that, if I haven’t gotten bit, I’ll reel it back up and throw it out again. It’s not really finesse fishing where you’ll let your bait sit for a long time. I use it a lot more like a power fishing tool than anything else.”

Although the rig fishes a lot like a jig or other Texas-rigged plastic, Yamamoto said that the hook set is a little different with the Chicken rig. “When a fish bites, they are almost always swimming with it. If you jerk really hard on it, you’ll likely lose a lot of fish. I recommend anglers just reel down and pull with hard steady pressure. You’ll lose a lot less fish than if you set the hook like you’re flipping.” 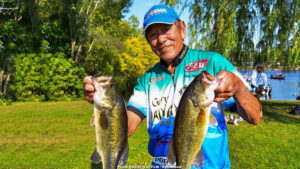 In many places across the country, bass are bombarded almost daily with a steady dose of lures. Finesse fishing has even become so popular that bass sometimes even turn their noses at a shakey head or drop shot. It’s almost a guarantee that they haven’t seen something like the Chicken rig before.

“We as anglers need to show the bass something different if we really want to maximize our success while fishing,” he said. “When that backwards weighted Kut-Tail falls in front of them, it presents an image that they haven’t seen before that looks really natural. They have no choice but to strike.”

The Chicken rig also offers a several other advantages over similar wacky or backwards weighted setups that include the following: 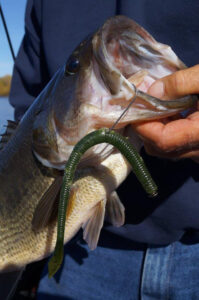