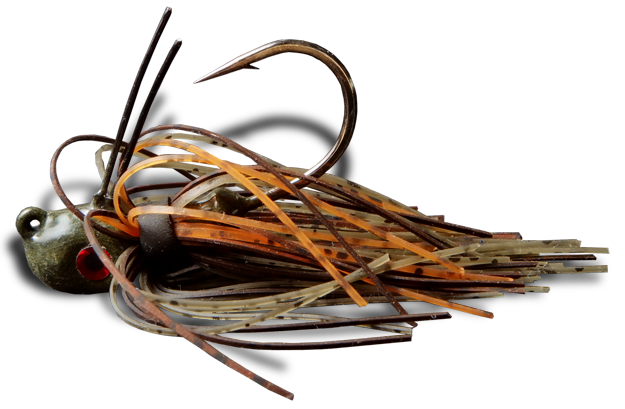 Sometimes writing product reviews is painful. Not because you have to do something that isn’t fun. What is more fun than testing new products on the water and calling it work? But occasionally we let go of some things that we’ve kept under our hat for a little while. The Hags Tornado was one we did earlier this year. Then we did one with the CP Crankbaits.

Now that it’s winter, I got to thinking about my favorite cold water lure. Not surprising it’s a jig. But there are a lot of jigs that I like. So what’s my favorite jig for the cold months? It’s actually a small company jig made in Eastern Kentucky.

The Cumberland Pro Lures Pro Caster was born on Lake Cumberland in Eastern Kentucky. The original owner sold the company to avid angler Brian Wilson many years ago, and he immediately began applying his intimate knowledge of jigs to the company.

Through Wilson’s desire to make a jig that fit his style of fishing, the Pro Caster was born. There are a lot of components that make the jig special, but it starts with the head shape. Brian wanted a jig he could cast to the often looking barren banks on fisheries in Kentucky, that would cast easily, fall horizontally, and come through cover without a bulky weed guard. That’s a lot to ask of one small jig.

He started with giving the head a slightly concave shape on the sides. Then he gave the bottom a flat edge so that the head stands right side up as it’s fished. He rounded the nose a bit to help it pull over and through rocks, stumps and brush.

Next he added a smaller than usual but super sharp Gamakatsu hook. He played with several hooks and came to several conclusions in his decision. With a smaller hook he gained some advantages. First the smaller hook took away some of the leverage a bass has when trying to throw a jig free. Because the hook bend is so close to the head it’s harder for a bass to sling it free. The smaller hook gets hung up less than the longer hooks did. And as a side note, it’s become a very popular smallmouth jig on lakes like Dale Hollow and Cumberland.

“Some guys think a small hook is no good,” Wilson said. “But it won a tournament on Guntersville with 28 pounds this year, and the winner never lost a big bass on the jig all day. It handles big fish just fine. Because the hook is shorter, it actually makes it a little stronger.”

He opted for two coated wire guards that can be bent and moved into place to create more or less weed guard for the jig.

“A fiber brush guard can actually act as a keel on a jig and cause it to lean and move different than you want it to,” Wilson said. “The wire guard also allows for a better hookset on a long cast with lighter line.”

All of this allows the jig to fall with a horizontal profile on slack line, and it has a very subtle action on the fall. Then when it hits bottom, it has a slight upward position so it looks like a crayfish in a defensive position.

Wilson spent a lot of time perfecting colors. He and his daughter spent a whole summer collecting crayfish from all over, and many of his jigs are from the most prominent colors in their study of crayfish colors.

He offers a plethora of standard colors but he’s also small enough that he can custom create skirts.

“We get a lot of calls from out west where guys want the jig but they want them in hot producing colors out there,” Wilson said. “So we just make up custom skirts to their specifications.”

I have been using the jig for three years now and have been reluctant to share with many folks. Especially in the cold months or when I’m specifically looking for smallmouths. I don’t know what it is about the jig, but I’ve caught a bunch of big smallmouths on it and a bunch of big fish just casting banks and searching for overlooked cover out away from the bank.

There have been several tournaments won on the jig. The 2009 Forrest Wood Cup co-angler title, Fishers of Men National Championship, TBF High School Championship, a college championship for EKU have all been won on this jig. Yet it’s still flying under the radar for most folks.

In cold weather, a Pro Caster with a Zoom Super Chunk Jr. is deadly. I trim the skirt to be a little shorter than stock but not quite a finesse cut. I like to use a little scent in the colder months when I think bass are looking at the bait more before deciding to bite it. Then again in the spring when a small jig can really do wonders, this jig gets pulled out again. And finally in the fall when the bass seem to shy away from the bulky jigs they’ve been eating all summer, the Pro Caster will coax bass with a more finesse profile. You can’t fish it wrong if you fish it slow and think about a crawfish just crawling over rocks on the bottom.

The jig retails for $3.19 but you might find it cheaper if you look around. I was hesitant to let this one out, but it’s too good not to share.

To learn more about the jigs or to order, visit cumberlandpro.com or TackleWarehouse.com. 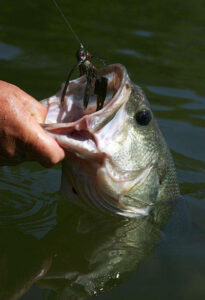