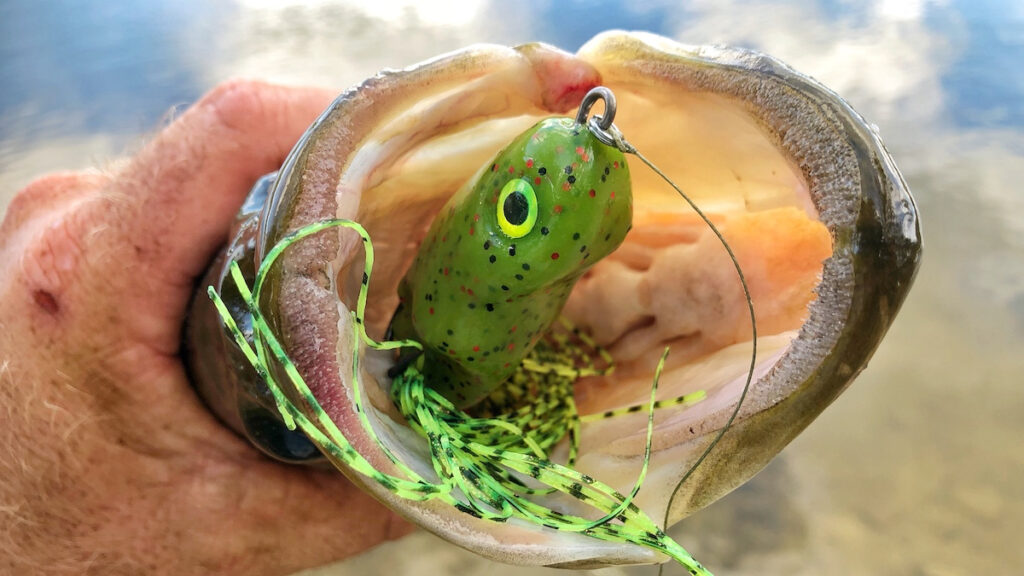 The good old Scum Frog, one of the oldest hollow-body bass fishing baits ever made and a bait of which any angler over 40 likely has some super fond memories. But with all the hype and luster of “new and improved” hollow-body baits out there now, this old horse has been put out to pasture by a lot of anglers new to the sport.

Though the original still catches fish, Scum Frog has reinvented the wheel themselves a few times as well, adding several baits to their lineup over the years. Today we’re going to take a close look at one of those newer models, the Scum Frog Pro Series Frog. So let’s get to it. 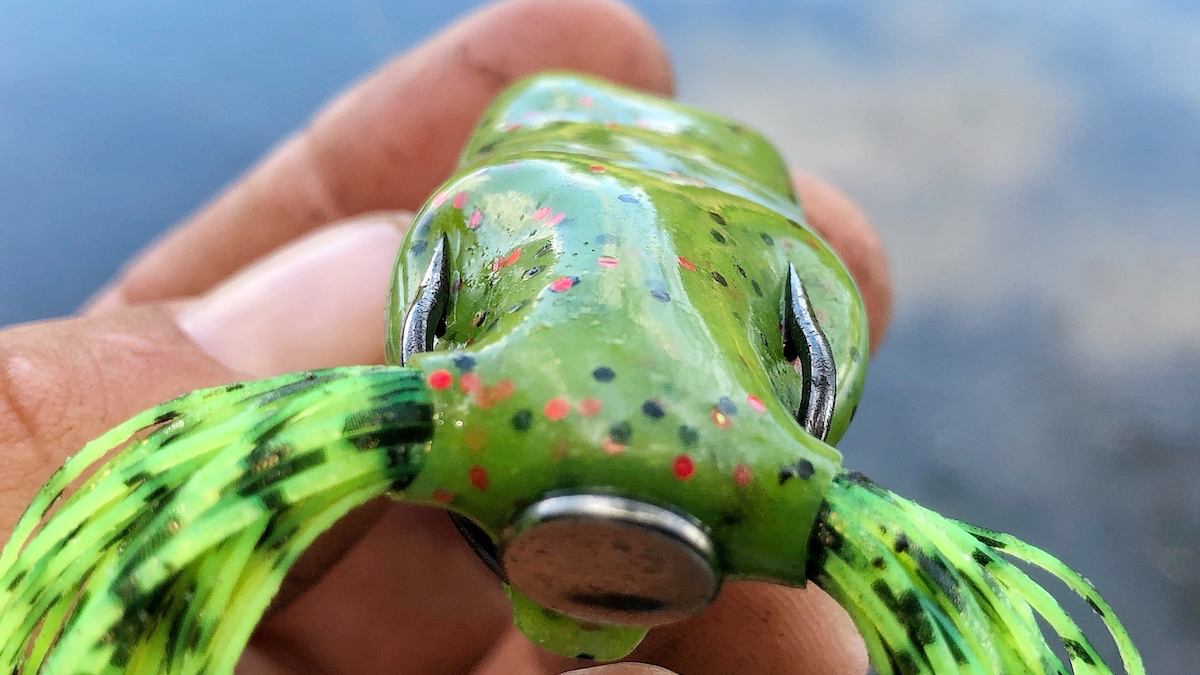 As I’ve stated many times before when reviewing frogs, you’ve got to start with the hook. A good frog with a bad hook is a bad frog. There’s just no way around it—a hollow-body frog has to have a superior hook to be effective. Scum Frog did a good job here by incorporating a heavy duty 4/0 Owner Frog Hook into the Scum Frog Pro Series Frog. The hook is super sharp and strong, and already angled up a bit for a better hookup ratio.

I also like how they used the body of the bait to make this lure weedless. It’s obvious from the name, these frogs are built to be thrown into some really nasty stuff, so they’re going to need to be pretty weedless. With a raised back and indented sides, Scum Frog created little channels for the hook points to kind of tuck into and stay out of trouble. But when a fish bites and the body compresses, the hooks are right there ready to lodge into a bass. 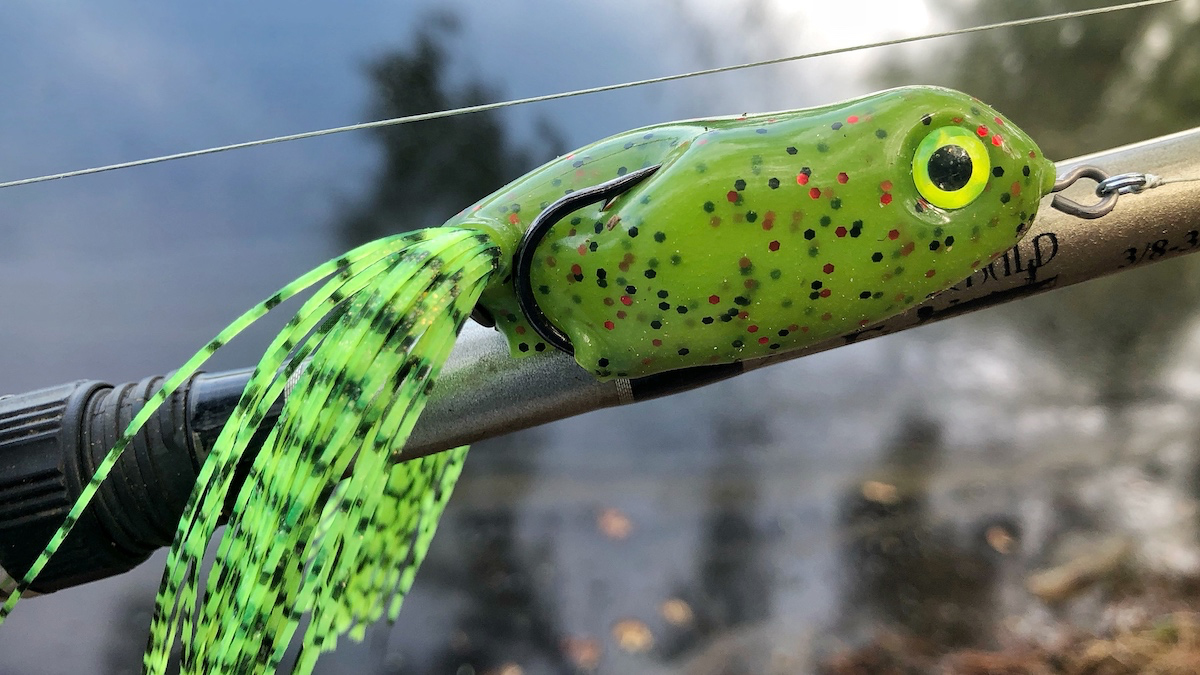 When fishing a frog around mats, scum and other thick vegetation, it’s a good idea to add a rattle to your bait. You can do this by sliding one into the frog where the hooks come out of the body. The only problem is that these rattles can get turned inside the body right at the wrong time and interfere with the hook up, getting wedged into an awkward position and stopping the bait from collapsing like it needs to.

Scum Frog eliminated the need to add a rattle or the chance of one getting in the way by incorporating one into the hook. Using what looks like shrink wrap or maybe rubber hose, they attached a rattle to the shaft of the hook to ensure that it stays tight to the hook and out of the way during the hookset. Some other company out there may do this too, I’m not sure of that. But this is the first time I’ve seen this done personally and I really like it.

Action and intended use 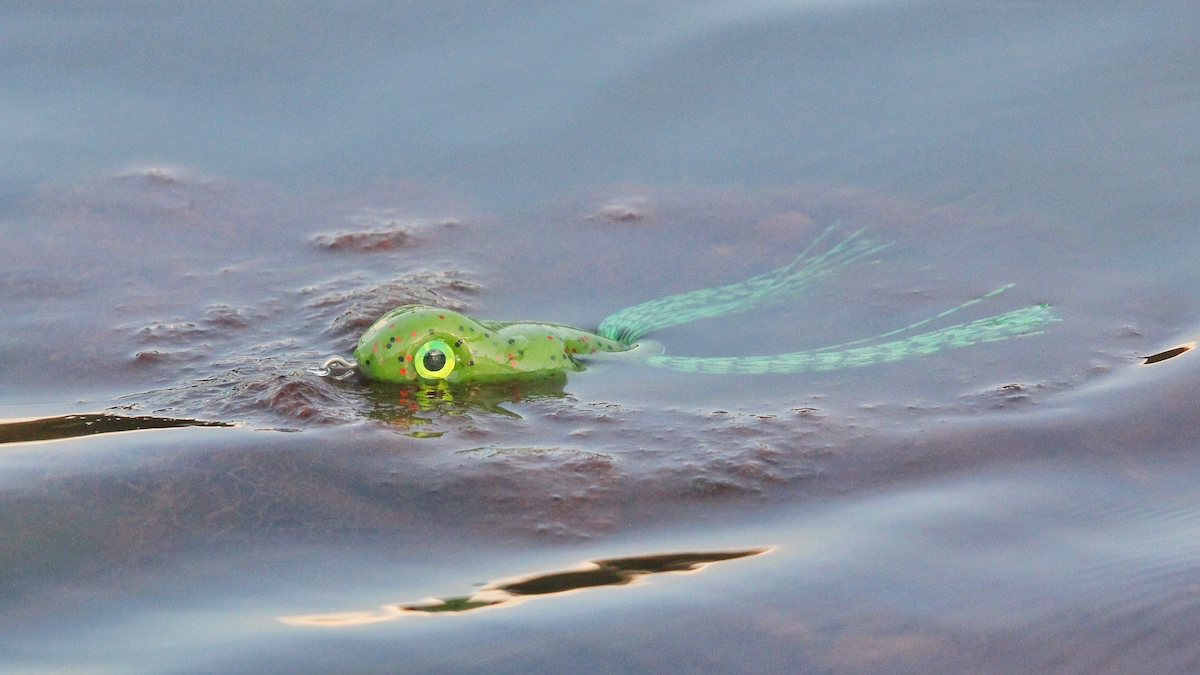 This bait does walk fairly easily and I would say it has a pretty good action. I’m not sure I would use it to replace my all-purpose frog for open-water fishing and skipping under bushes. You have to remember that it wasn’t really designed to do that. It can be fished in open water and it catches fish in open water. But this bait is really designed to be fished around some pretty thick stuff.

Fishing a frog over and around mats on lakes like Guntersville and all the way up to Champlain is a whole different deal. And you’ll find that many frogs just aren’t designed to excel on those types of bites. The Scum Frog Pro Series Frog is built with that kind of fishing in mind. The rattle is a big part of what Scum Frog has done to set this bait up for success on that type of bite. But they didn’t stop there. 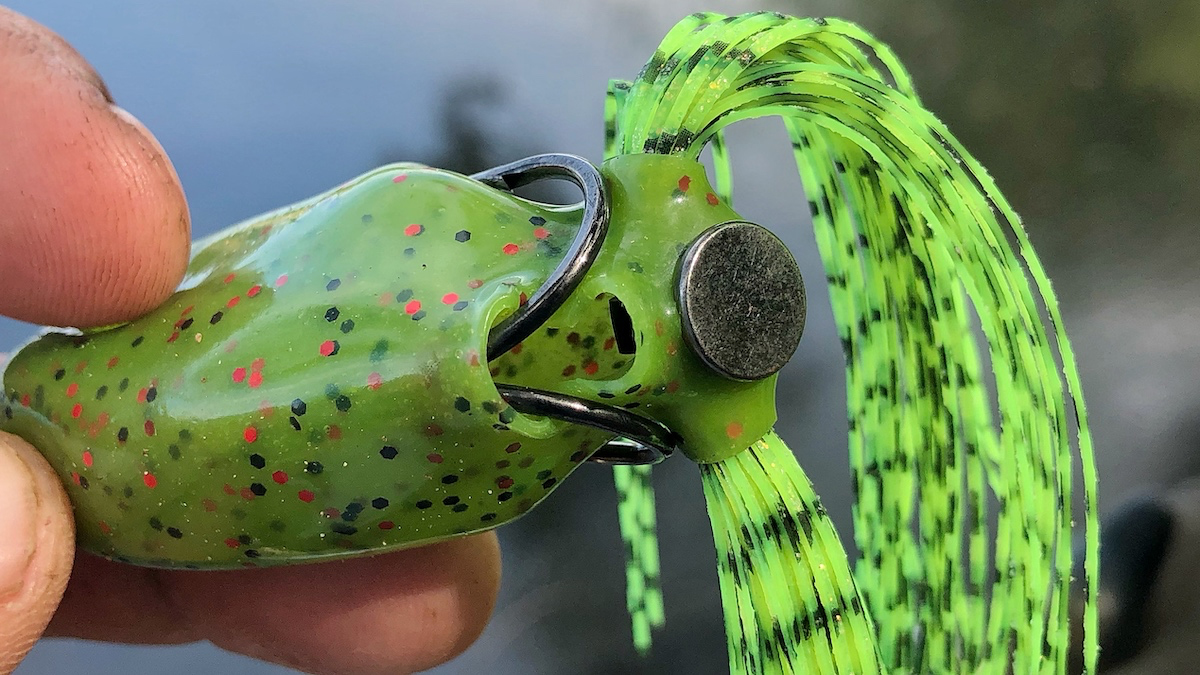 If you look at the end of the body of this bait, you’ll see a large opening and a silver weight. The weight is there to help the bait orient in the air and land belly-down each time you make a cast. But it also helps the bait create a more definitive presence when mat fishing. Adding weight to your frog is a great way to help the bait dig into the mat a little and aid the fish in locating it through the dense vegetation and scum. And having that weight secured at the tail keeps the nose of the bait up and prevents the frog from hanging up.

The size of the hole at the rear of the bait is also worth noting. I was surprised when I first saw how big it was and figured I’d be pouring water out of this bait constantly. I honestly thought it would take on so much water that it wouldn’t even float. But to my surprise, I spent less time removing water from this bait than I do a lot of other frogs. With some of the others, it seems the companies try so hard to minimize the hole size to keep water out, that when it does get in I have to squeeze those baits a bunch to get it to come out. If any water goes into this one, it comes right back out and somehow even in open water this frog sits high and floats well. Still haven’t figured out how they pulled that off, but I’m impressed by it.

A couple other notes 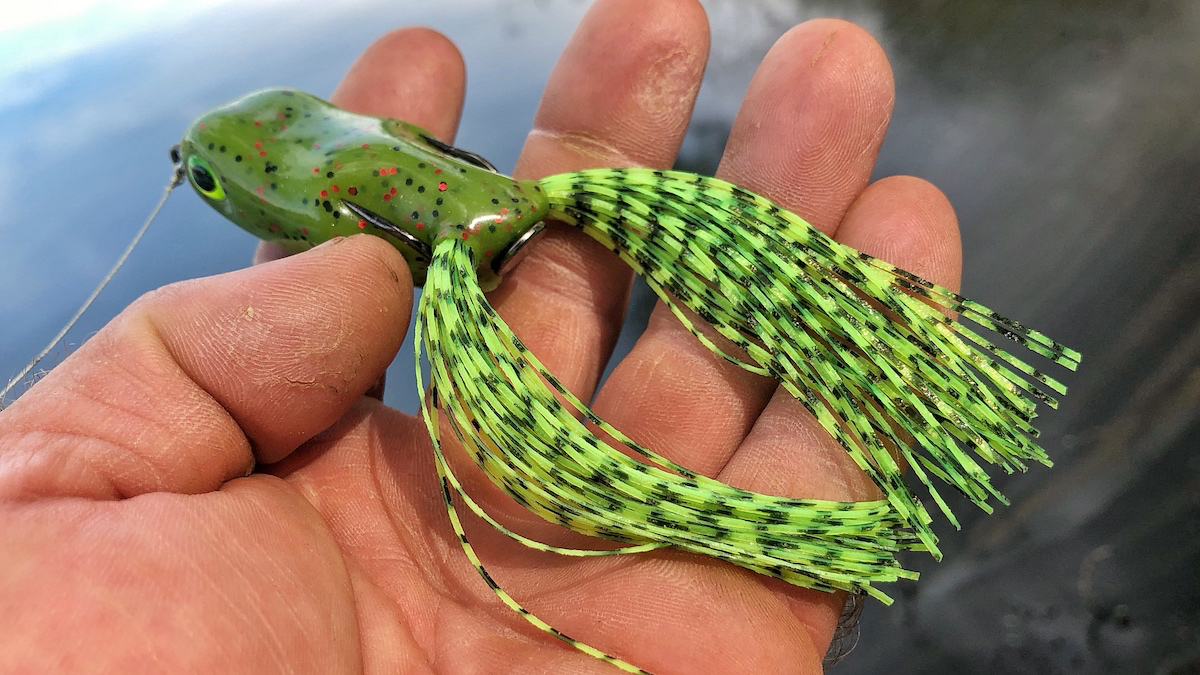 You’ll notice at the nose of this bait, Scum Frog added a split ring to the line tie. In reading some of the descriptions of the bait, I see where they did this in order to make it walk easier. The bait does walk well but I’m not sure the split ring was necessary. Then again, I didn’t take it off and try to walk it without the split ring either so I’ll have to take their word for it. And it’s a beefy little split ring so I don’t think there’s any additional risk from adding another link to the chain. It’s just different and thus, worth noting.

I also noticed there was a bunch of skirt material used to make the legs, which creates a pretty wide profile in the water as the legs spread out. I have no real opinion on this being beneficial or not; again, it’s something worth noting since it’s a little different. If you like big legs, this one’s got them. If you don’t, you can thin them out with scissors.

With 7 colors available and coming in at just under $7, I do believe this is a good bait for the price. It’s especially worth checking out if you’re going to be fishing around dense and matted cover. Also, if you spend a lot of time fishing ponds, this is a great bait for you. Of all the features of this bait, I was the most impressed by how they attached the rattle to the hook. I also really liked the hook and the positioning of it as well. It’s a great bait for a good price and one that will serve a particular purpose in the arsenal and last for a bunch of fish catches.

The Scum Frog Pro Series Frog is available at the following retailers: