I’ve always loved fishing a Chatterbait, so I was super excited when word started spreading about a new joint creation from Z-Man and Evergreen. A lot of the world’s top professional anglersâ€”who have no affiliation with Z-Man or Evergreenâ€”are lining up to pay full price for these new vibrating jigs out of their own pockets.

I’ve been extensively testing this new lure lately and as always, I made a concerted effort to sift through the hype in order to help our readers make an informed purchasing decision.

Here’s what I think you should know about the new Z-Man/Evergreen Chatterbait Jack Hammer.

Doesn’t rise or blow out 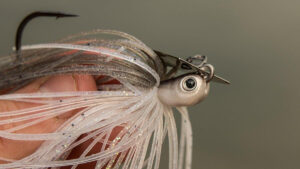 Many of the vibrating jigs you’ll find have a very common problem: They rise throughout the retrieve and they’ll blow out when retrieved at high speeds. This makes it tough to keep ’em in the intended strike zone and it’s hard to cover water quickly.

This new vibrating jig does not have that problem whatsoever. I’ve been using the 3/8-ounce size and even with a 7.1:1 gear ratio reel, I’m able to crank it as fast as I can without any rising to speak of. It stays down throughout the entire retrieve.

I primarily attribute this to two design features. The blade is much thinner than other Chatterbait models, which allows the blade to cut through the water instead of pushing through the water. This translates to much less resistance at all speeds. 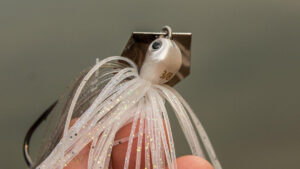 In addition, the head has a low center of gravity and a flat bottom. This also helps the lure stay in the optimum strike zone, regardless of your preferred retrieve method.

This has helped me catch a bunch of fish throughout my testing. I’ve been burning it through isolated grass pathches and the bass have been choking it. They won’t bite it when I reel it slowly, so having a vibrating jig that allows for maximum speed has been incredibly important to my recent success.

Gets to work immediately 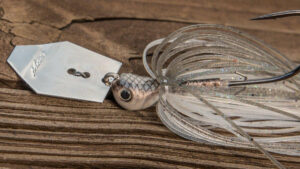 I’ve also noticed that this lure immediately begins vibrating from the second I engage the reel handle. I do a lot of short-range pitching with Chatterbaits, so I need something that will start working right when it hits the water. This has been a huge deal for me when fishing isolated stumps and boat docks.

This is perhaps the most impressive aspect for me. It’s possible to skip a few of the vibrating jigs on the market, but it’s not easy. I’m not able to work through a long row of docks quickly without a few backlashes or bad casts. As you know, efficiency is everything when you’re targeting boat docks.

The Z-Man/Evergreen Chatterbait Jack Hammer skips better than any vibrating jig I’ve ever usedâ€”that’s really the only way I can say it. Without even thinking, I can slide it underneath boat docks and overhangs without skipping a beat. I’m even comfortable saying that it skips better than many traditional jigs that are specifically designed for dock fishing.

This technique has also been a major producer for me throughout my testing. The docks on my home lake get hammered with pressureâ€”those fish see flipping jigs and Texas rigs every day of the week. Being able to slide this Chatterbait underneath those docks, however, has allowed me to show the bass something they rarely see. The bites have been bone-jarring, to say the least.

The keeper is legit 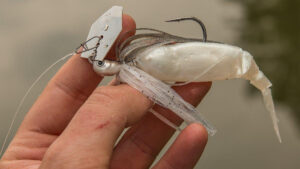 I’ve been exclusively using a Z-Man Razor ShadZ with this lure and the double-wire keeper design has kept it securely fastened on the shank of the hook without any problems; even after skipping hundreds of docks. I have not used glue or any other trick to keep it buttoned.

The lure and trailer combination in these photos has easily caught more than 20 bass and the Razor ShadZ has stayed in-place the entire time.

It has the best Chatterbait hook so far 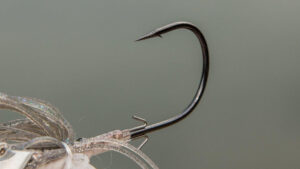 I mentioned I had been catching them both in isolated grass and underneath boat docks, which has given me an opportunity to test the hook in both long and short-range situations.

The hook has excellent penetration on long casts and when a fish bites it close to the boat, it does not bend or flex. I have not lost a single fish thus far while testing this lure.

Try it without the skirt

The Z-Man/Evergreen Chatterbait Jack Hammer skirts come in 10 colors and they’re just flat-out sexy. But as you can see in this photo, I’ve actually been using one without the skirt and it has been catching a bunch of bass over the last few weeks.

I chose to remove the skirt because my home lake is very clear right now. It has been taking some super finesse techniques to catch ’em lately, so I wanted to make this Chatterbait as slender and natural-looking as possible. I removed the skirt and not only does it catch ’em, but it also comes through grass even better than before.

In anything short of matted vegetation, I can retrieve this lure through the grass with very few hang-ups. Again, this shows the bass something they don’t often see. They’re used to seeing topwater frogs and weightless plastics in these gass-laden areas, but they don’t often see a vibrating jig. The Z-Man/Evergreen Chatterbait Jack Hammer has allowed me to capitalize on and take advantage of that unfamiliarity. 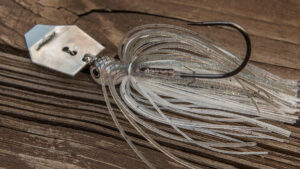 At $15.99 a pop, these are pricey lures. I’m not one to stock my tackle boxes with expensive stuff, but I honestly believe they’re worth every penny. I will be ordering some more this week because after my testing, I highly doubt I’ll be throwing another vibrating jig in the foreseeable future.

The Z-Man/Evergreen Chatterbait Jack Hammer is available at these online retailers: