The Chatterbait from Z-Man became a staple for bass fishermen seemingly overnight. A slightly bent 6-sided thin metal blade turned a simple skirted jig into a reaction bait as conducive, and at times more conducive to bass fishing as the lures before it. The bait won a bunch of tournaments when it first burst onto the competitive fishing scene. But that was nearly 10 years ago and not too much has changed with the consistent fish catcher.

The prostaff at Z-Man went to work with the lure designers to basically change and add all the features the professional anglers wish the original Chatterbait had. The result was the Z-Man Project Z Chatterbait. This bait incorporates a lot of thought and improvements to the original design.

Here are a few of my thoughts on the new Project Z Chatterbait after fishing with it for a while: 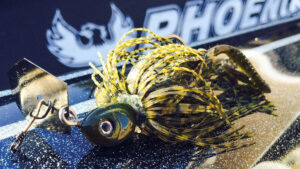 The head of the bait has more of a minnow type shape than the standard Arkie style head of previous versions of Chatterbaits. One thing I noticed about this head is that it helps the bait begin chattering on the first crank of the handle. And the bait seems to track and keep chattering better.

Most folks think the key to the Chatterbaits is that they just vibrate. The real key comes from the Chatterbait’s ability to deflect, kick out and immediately start vibrating again. A lot of the knockoffs will deflect and the slide for a few feet, missing the key window to trigger a bite. The new head design seems to make this feature even more consistent.

I also liked it better with the skirt removed and a swimbait threaded on the shank. It’s a minnow head design so it’s more streamlined for minnow shaped trailers like swimbaits.

KEEP YOUR PLASTICS IN PLACE WITHOUT GLUE

One of the biggest knocks we heard on the original chatterbait was the hook was good out of the package but would dull after several bass. The new 5/0 Mustad hooks are tacky sharp and have very durable points that hooked a lot of bass this spring for us and they were stiff enough to land some pretty sizable bass while I tested. 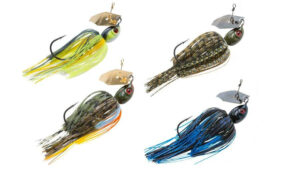 The one thing they kept the same, and quite frankly, they had to because it’s the best design, was the blade. They did, however, add a better line tie. This one is twisted so there is never a chance of a clip opening up on hard cast or fish fight.

But the blade is the patented Chatterbait blade. Quite frankly, the other blades just don’t match it in consistent, expected performance. So it’s the best in our book at making a vibrating jig run right, and more importantly, trigger bass into striking.

You can find the new Z-Man Project Z Chatterbaits at these online retailers:

They retail for $7.99. Visit zmanfishing.com to see more about these new baits. 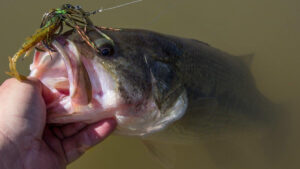