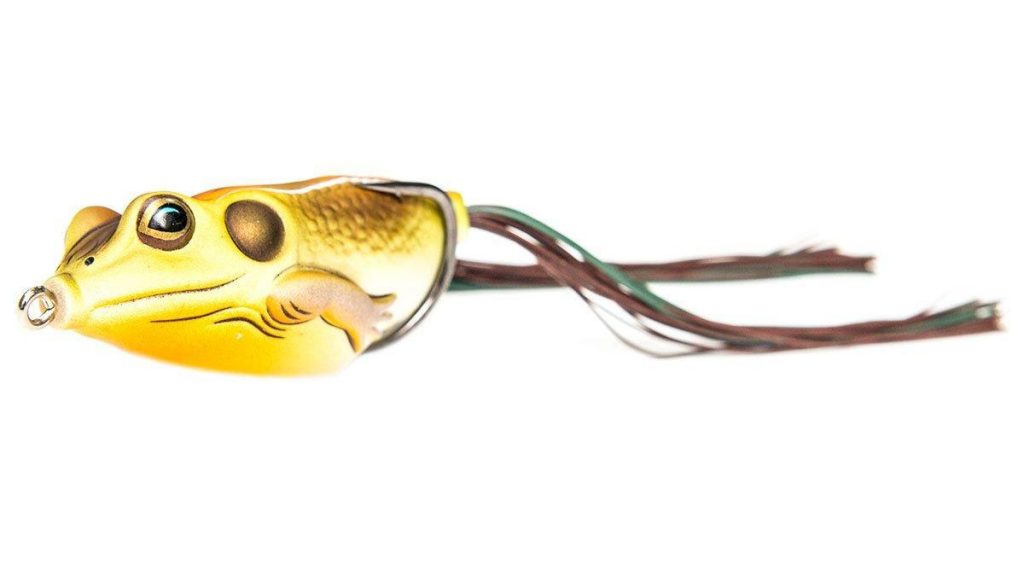 It’s a beautiful time of year in my part of the countryâ€”the bass are choking on topwater frogs. There are few things I look forward to more than a solid frog bite. The anticipation, braided line screaming through my line guides and the unexpected explosions never seem to get old. Even writing about it makes me want to jump out of my desk chair and hook up my boat.

It’s sad to say, but until a month ago, I had never had an opportunity to try the LIVETARGET Hollow Body Frog. I had heard folks in the fishing community talk about it, but for reasons beyond me, I didn’t even own one. But that all changed recently when I added several to my froggin’ arsenal.

After using it for several weeks and catching lots of nice bass on it, I’ve learned a lot about its design and applications. Quite simply, it’s a definite fish catcher that’s easy to use and holds up to abuse very well.

If you’re thinking of adding some of these frogs to your collection, I think there are a few things you should know about ’em. 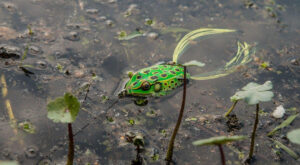 Beginner or expertâ€”you’ll be able to walk it

Walking topwater frogs side-to-side on the surface, commonly referred to as “walking the dog”, can be one of the most important aspects of frog fishing. It doesn’t necessarily mimic the natural swimming action of a frog, but this particular retrieve keeps your lure in very small strike zones for as long as possible. With that being said, the ability to “walk” is one of the first things I look for when I’m choosing a topwater frog.

I’ve spent a lot of time throwing using the LIVETARGET Hollow Body Frog. I’ve fished it from both my boat and the banks of ponds and have targeted weeds, wood cover and open water. After all of that experimentation, I’ve found it to walk quite well with minimal effort.

At rest, its nose sits a bit higher out of the water than many hollow-bodied frogs I’ve used. I wasn’t quite sure what to think of it at first, but I quickly realized that this is an intentional design feature. The higher nose position seems to keep your knot and the line tie from digging into the water as you retrieve the frog, which gives it a wider range of motion and more freedom to walk back and forth.

There’s something else worth mentioning, in my opinion. I have heard people complain about waterlogged hollow-bellied frogs since they hit the scene. It doesn’t matter the brand, model or shape of the lureâ€”ask around enough and you’ll hear someone start knocking on its buoyancy. But I can honestly say that after weeks of use and plenty of fish catches, I have not had this issue thus far.

I’m averaging roughly 8 to 10 casts before I need to squeeze the excess water from the body, which isn’t a big deal to me. I’m actually very pleased with that rate. I haven’t noticed it sinking or diving, but I think a lot of that has to do with the manner in which you fish the frog. If you’re making some sloppy casts into docks, seawalls or riprap, I’m sure it would increase its water intake. 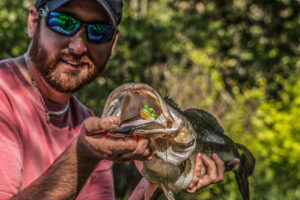 You can stick ’em

One of the widely recognized downfalls of topwater frog fishing is the potential for a poor hookup ratio. Some professional anglers advise us to wait a half-second before setting the hook while others swear by an immediate hookset. These different theories confuse anglers and therefore, the hooksets turn into guesswork at times.

I’ve had my best success with the LIVETARGET Hollow Belly Frog when I set the hook immediately after the bite. I’m not hesitating like I might do with some other topwater frogsâ€”I’m laying the wood the minute I see her eat it. Knock on wood, but I’ve only missed or lost two or three fish in the past several weeks while using this frog. 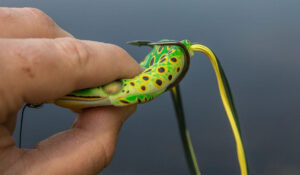 I attribute this excellent hookup ratio to the very soft and collapsable body of this lure. If a frog’s plastic is too rigid, the hooks will have a hard time penetrating the mouth of a bass. But this particular frog is extremely soft and collapses with very little pressure. A lot of the bites I’ve had lately haven’t been very explosiveâ€”you can’t even hear them break the surface. A hard frog will cause you to lose a lot of these timid bites, but this frog has allowed me to catch them without any problems whatosever.

In addition to its collapsability, the LIVETARGET Hollow Belly Frog is armed with some serious hooks. They’re sharp, they don’t flex and most importantly, the tips don’t roll. Each set of hooks are as sharp as the day I unpackaged them. 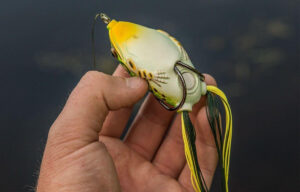 Let’s be real for a secondâ€”dainty, fragile frogs stink. There’s no sense in putting a delicate frog in the path of a giant topwater explosion. It’s going to lose every time. So as you can probably guess, I want a frog that has some shoulders to it.

On almost 90 percent of my bites with this frog, the body has separated from the hooks and slid a foot or two up my braided line. There’s no doubt that some folks won’t like having to resituate the body after each fish catch, but I think it’s a huge contributing factor to its durability. I don’t know if they purposely designed it to do this, but I’m actually a big fan of it.

It makes sense if you think about itâ€”when a big bass crunches down on hollow-bellied frog, that plastic is going to get ripped to shreds eventually, especially as the bass buries itself in weeds and nasty cover. But when the plastic body of the LIVETARGET Hollow Body Frog slides up the line, it’s essentially out of harm’s way. It saves itself from a lot of added abrasion.

As I mentioned, you’re probably going to have to slide the frog back down to the hooks after you catch a fish. But the body doesn’t ball up and become unmanageable. It slides back to its original position with very little, if any, manipulation. And so far, it doesn’t seem like it has any adverse affects on the structural integrity of the plastic. 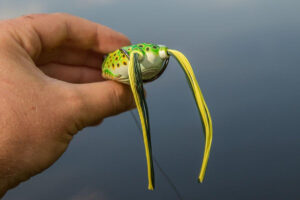 This is something that really bothers me about some topwater frogs. You fish with one for a few hours, cut it off to change colors and toss it back into your tackle box. Seems innocent enough, right? When you want to use that frog again after it has dried, however, the tails are crimped, lumped together and rigid. You can sit there and pick at ’em for hours and it’s nearly impossible to return them to their original shape, texture and action.

I’m happy to say that the LIVETARGET Hollow Body Frog doesn’t do this. I don’t know how or whyâ€”I wish I did. But the legs store beautifully and even when they’re folded in a small tackle compartment, they spring back to life immediately. This little feature, whether intentional or unintentional, really adds to the durability and longevity of this frog.

I’ll certainly add this frog to my collection and use it regularly. Although I would like to see some additional color choices and a bit more color detail on the belly of the lure, LIVETARGET hit the high spots and offers most of the colors you’ll need. It has been wildly effective for me lately and I think it deserves careful consideration the next time you add to your froggin’ box.

The LIVETARGET Hollow Body Frog is available at TackleWarehouse.com. 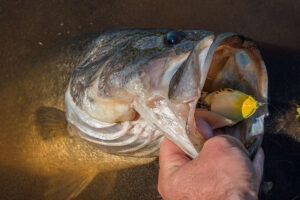