Lipless crankbaits are an excellent tool whenever youâ€™re attempting to dissect large areas in a short period of time. Whether you fish larger lakes or small ponds, theyâ€™re a great way to quickly locate active bass.

Iâ€™ve been testing the Lucky Craft LV 500 for the past several weeks and after hundreds of casts and lots of nice fish catches, it has become an important tool in my boat. It has some very unique characteristics that have allowed me to be much more efficient on the water.

First things first, allow me to get something out of the way: Not all lipless crankbaits are the same. While many of them look similar in the package, there are several nuances worth considering before making a purchase. Iâ€™ve tested nearly all of them and only a select few meet my particular standards. 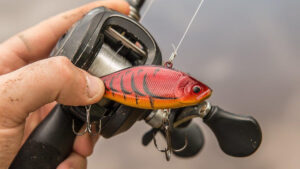 Anglers will first notice the outstanding castability of the Lucky Craft LV 500. Youâ€™ll find other lipless plugs that cast well, but this lure currently out-casts everything in my boat. It weighs in at 3/4-ounce with most of the weight in its nose, which allows your rod to load excellently on the back cast. Even in high winds, youâ€™ll experience very little twirling or twisting while the lure is in flight. If youâ€™re targeting windblown points or flats, it will be a very useful tool for you.

In addition to its castability, this is also one of the loudest lipless crankbaits Iâ€™ve ever tested. It has a combination of both internal brass and glass rattles that create a very unique sound and pitch. If you shake it in your hand, itâ€™s almost ear-piercing, to be quite honest. This design feature makes it especially effective in stained and muddy water. Weâ€™ve had a bunch of rain in my area lately and the lakes are essentially orange; this is one of the only lures thatâ€™s producing for me. 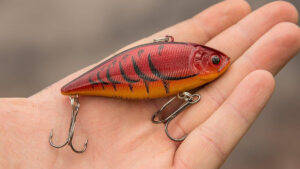 There are over 45 color options available on Tackle Warehouse and not only are they extremely lifelike, but they also hold up well to hook rash and teeth marks. You can pound the LV 500 into rocks, gravel and wood without any chipping or cracking to the finish.

Also worth mentioning are the quality components. Iâ€™m not a big tinkerer when it comes to my tackleâ€”I like fishing much more than replacing hooksâ€”and if youâ€™re of a similar mindset, youâ€™ll be able to appreciate both the hooks and the split rings that come on this lure. The No. 6 rear treble and the No. 4 front treble are super sharp and have very little flex when youâ€™re fighting fish.

Because the LV 500 is meant to be fished aggressively and around submerged vegetation, the split rings are quite beefy and I have noticed absolutely zero give; even when I work on â€˜em with a strong set of pliers. The oval-shaped line tie is also a nice touch, as it keeps your knot from becoming frayed in the jagged part of the split ring. 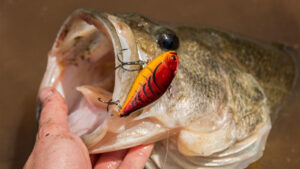 Iâ€™ve spent a lot of time fishing with this lure in both larger reservoirs and smaller farm ponds and Iâ€™m incredibly impressed by its productivity and efficiency. The fish havenâ€™t been concentrated in big groups lately, so covering water quickly has been a major key to getting bites.

Itâ€™s difficult to articulate how well the LV 500 casts; it will open up a lot of opportunities for bank anglers especially. I have a favorite pond I like to fish in the evenings after work and when Iâ€™m limited on time, I donâ€™t fool with launching the boat. This lure allows me to reach places from the bank that I previously couldnâ€™t. With most techniques, I can fish about 30 percent of the pond from the bank but the castability of the LV 500 allows me to fish roughly 50 to 60 percent of it. 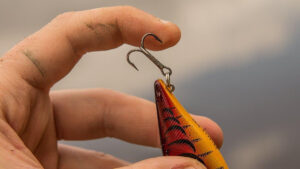 Thereâ€™s something about the sound of this lure that even lethargic bass have a hard time ignoring. It doesnâ€™t sound like your typical lipless plug and based on the aggressiveness of the strikes Iâ€™ve had, I feel like the fish attack it out of irritation than anything else. Most of the bites Iâ€™ve experienced have flat-out stopped my reel handle.

The Lucky Craft LV 500 is a high-end, fish-catching lure. With prices starting at $15.99 per lure, itâ€™s not going to be in everyoneâ€™s price range. But if youâ€™re able to spring some extra cash for a lipless bait, I would absolutely recommend it. It casts like a rocket, it has a very different sound and most importantly, it catches â€˜em.

The Lucky Craft LV 500 is available at TackleWarehouse.com.