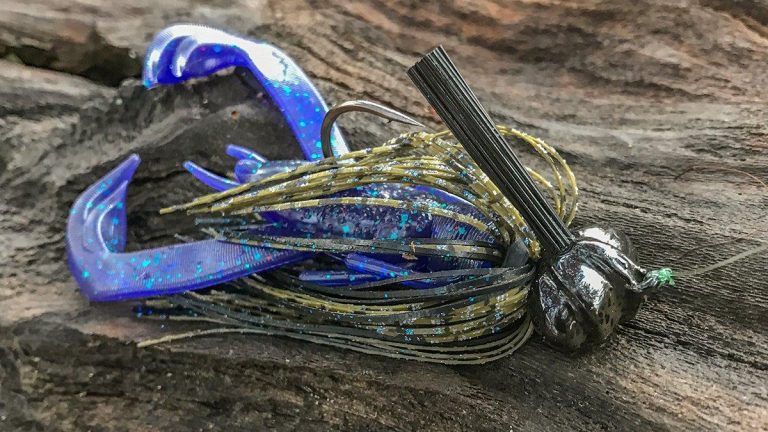 Football jigs are incredibly effective tools when you’re targeting deep, offshore bass in both the winter and summer months. While finesse presentations are perhaps a more popular choice for anglers, a bulky football jig has a tendency to catch better quality in my experience.

I’ve had an opportunity to tinker with the V&M Flatline Pacemaker Football Jig for the last several months. It’s much different than many other football jigs I’ve fished; several of its features make a lot of sense and have helped me catch a lot of nice bass.

Below are my thoughts on it. 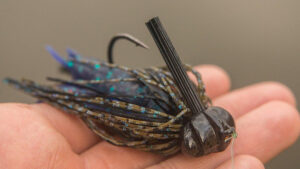 A lot of football jigs look similar and I think this fools a lot of anglers. It’s very important to look at the small details before you make a purchase—these small subtleties won’t always jump out to the naked eye.

The V&M Flatline Pacemaker Football Jig was designed by Bassmaster Classic champion Cliff Pace—who won the Classic on a football jig—and is priced at $4.79. It comes in three sizes: 1/2-ounce, 3/4-ounce and 5/8-ounce. It’s available in 21 different colors and each color option is incredibly detail-oriented. In my opinion, they’re some of the best-looking skirt colors I’ve ever run across.

Its notable features include a custom hook with a 30-degree bend, a unique head shape and a large weed guard. We’ll delve into each of these features in the next section.

I have fished with football jigs for many years and my biggest knock on them is simple—they get snagged too much. I’ve lost a lot of jigs and money to gnarly brush piles and rock. There’s not an easier way to ruin a good fishing spot by breaking off your jig in the cover.

The V&M Flatline Pacemaker Football Jig’s brush guard is noticeably larger than many others and this gives you the ability to make long casts to thick cover without risk of losing your jig. It will get snagged periodically, but you can usually recover it without an issue. To the best of my knowledge, I’ve only lost two jigs since using this particular model.

My hookup ratio with this jig has been outstanding. It doesn’t have a generic, mass-produced hook in it. Instead, it’s outfitted with a custom hook that Cliff Pace specifically designed for this jig. It’s a thick, 5/0 hook with a 30-degree bend that pins nearly every fish that bites. This unique bend angle allows the elevation of the head to be lower which results in a bigger, more aggressive bite.

You’ll generally lose a fair number of football jig fish because they’re so heavy and give the bass a lot of leverage when they jump. But I haven’t really experienced that problem thus far. I’ve lost a few bass on it, but I’ll land the majority of them as long as I can get a solid hookset. This small detail is a very cool feature that I think many anglers will appreciate.

The head shape of this jig is also worth noting. It’s very wide which allows your jig and your soft-plastic trailer to stay upright throughout the entire retrieve. Not only does this allow the brush guard to do its job; it also gives the jig a much more natural presentation underwater.

I’ve played with the V&M Flatline Pacemaker Football Jig in some shallow, clear water just to get a better idea of how it acts in the deeper depths. It moves a bunch of sediment as you drag it which, if you’ve ever seen underwater footage of a live crawfish, is very natural-looking. When compared to a lot of the other jigs in my collection, it’s definitely a noticeable difference.

I’m going to be using this jig quite a bit throughout the winter and summer months. The colors are beautiful and the detail-oriented design makes it a big-time fish catcher.

The V&M Flatline Pacemaker Football Jig is available at TackleWarehouse.com.