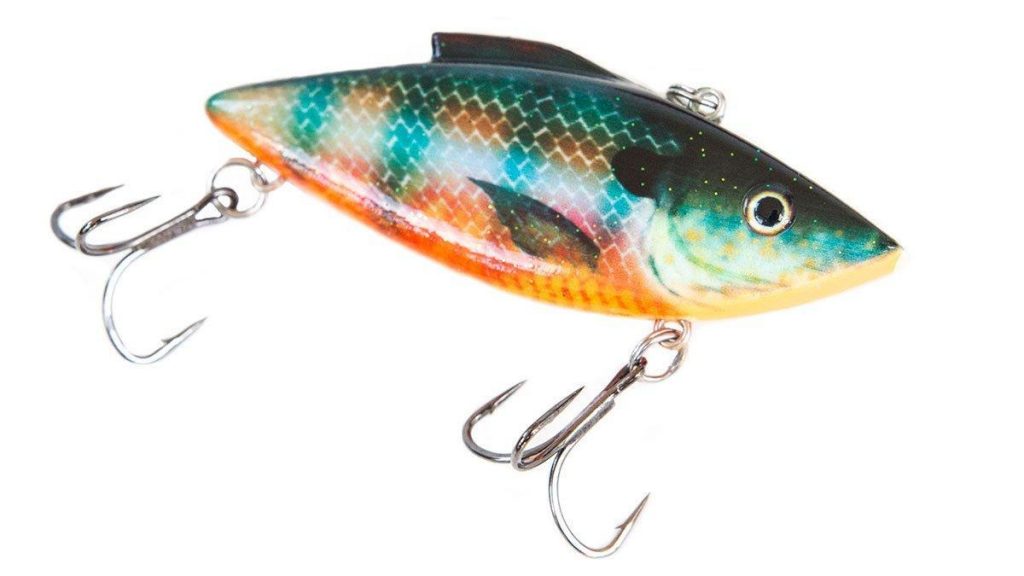 I’m willing to bet that you have at least one lipless crankbait in your tackle box. They’ve always been popular among anglers. What’s not to love about ’em? You can cast ’em a mile, dissect shallow water with ease and efficiently target submerged vegetation throughout the year. They’re simply one of those “special” lures that’s proven to catch fish.

Like most of you, I’m used to heavy lipless crankbaits that sink like a rock. So when I heard about the Bill Lewis Floating Rat-L-Trap, I didn’t really know how to feel about it. It was kind of like somebody telling you about a floating flutter spoon or a peanut butter and jelly burritoâ€”it goes directly against everything I considered normal.

I’ll be honest. I avoided using it for a while because it just didn’t seem right. I figured it would feel like putting my flip flops on opposite feet. But a few months ago I got a wild hair to rig it up and see what it would do. Change is a good thing, right?

After a lot of testing in various bodies of water, the “weirdness” of it has worn off and it has actually transformed into a pretty productive little lure for me. I think there are a few important things you should know about it.

I’m making a big deal out of the whole “floating” aspect on purpose. It doesn’t seem like it would really make a noticeable difference in regards to how you fish this lure, but I promiseâ€”it does. If you’ve fished traditional lipless crankbaits before, whether you realize it or not, the feel, weight and cadence is ingrained in your subconscious.

With that being said, the Floating Rat-L-Trap is going to take some getting used to. You’re going to feel like Ricky Bobby in “Talladega Nights”. You might not know what to do with your hands. But hang in there, because it’s definitely a fish catcher.

The most prominent difference between this particular model and the traditional Rat-L-Trap is its weight, or lack thereof. It’s the same 3-inch size as the original 1/2-ounce model, but the Floating Rat-L-Trap weights just 1/3-ounce. So when it’s tied onto one of your rods and you reach for it to make a bomb cast, remember this. It took me about a day and 3 ugly backlashes to get it right.

In all honesty, it’s not very difficult to castâ€”again, it’s just not something you’re used to. It doesn’t catch a lot of air in mid-flight, which keeps long casts a possibility, but you’ll need to pay a little more attention when you’re casting.

You’ll also have to remind yourself that yes, it floats. It’s a strange sight to see a Rat-L-Trap floating on the surface. When you make a long cast, you don’t have to be so quick to engage your reel, which allows for some interesting retrieves. Its buoyancy is most comparable, in my opinion, to a small balsa crankbait. It won’t pop right to the top like a big, plastic squarebill, but it’s just enough to avoid irritating hangups.

Here are the two retrieves that have been the most productive for me.

Yes, it still has the same rattles 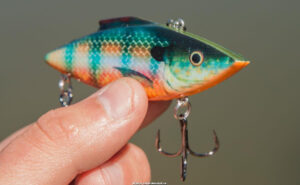 Because the buoyancy of this lure made me question everything I once considered “normal”, my first instinct was to shake it. It had to have those same, special Rat-L-Trap rattles, right?

Butâ€”there’s always a “but”â€”they seem to have a bit different pitch to ’em than what you’re probably accustomed to. They’re still loud and they continue to entice bites in stained water, but they’re a bit higher-pitched than the traditional rattles. I doubt this is due to a change in the rattles themselves, but rather a necessary change in the body construction.

Like I said, they still serve a purpose and catch fish. But they sound a bit different to my ears. 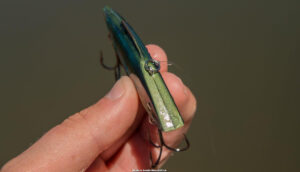 I was hoping these lures would be as durable as the original Rat-L-Traps. I was a bit worried that in order to make ’em float, the designers would have to sacrifice a fair amount of durability. But from what I’ve seen, they’re legit.

The finishes on these lures are really nice. They don’t show hook rash badly at all, but they will show some teeth marks after a dozen or so fish catches. I haven’t, however, noticed any major chipping or peeling as a result of these teeth marks. Just some scratches on top of the body that don’t seem to affect the overall color scheme.

The body of this lure has held up excellently throughout my testing. There’s really not much to say about it. I’ve caught a bunch of fish on ’em and hit ’em against stumps, docks and rocks without any splitting or cracking to speak of. 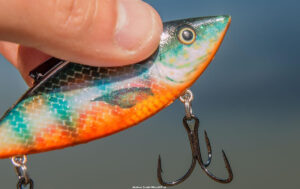 I don’t know when they started doing this, but the newer Rat-L-Trap models come equipped with some pretty mean EWG-style treble hooks. The same is true for the Floating Rat-L-Trap.

I really like ’em, to be honest. I tend to favor a more aggressive bend in my treble hooksâ€”especially when fishing lipless baitsâ€”and these particular hooks have led to a high landing ratio for me. They don’t flex during while you’re fighting a fish and they’re certainly sharp. Anytime I don’t have to replace trebles on a lure, I’m happy. I don’t have a problem at all using these stock hooks in tournament situations.

I like this lure a lot. I wasn’t sure that would be the case when I first got it, but it has really grown on me. It’s going to feel a bit awkward at first, but you’ll get used to it. It catches a bunch of fish, lasts a long time and has worthwhile hooks on it. I think it’s a good buy, for sure.

The Bill Lewis Floating Rat-L-Trap is available at TackleWarehouse.com.