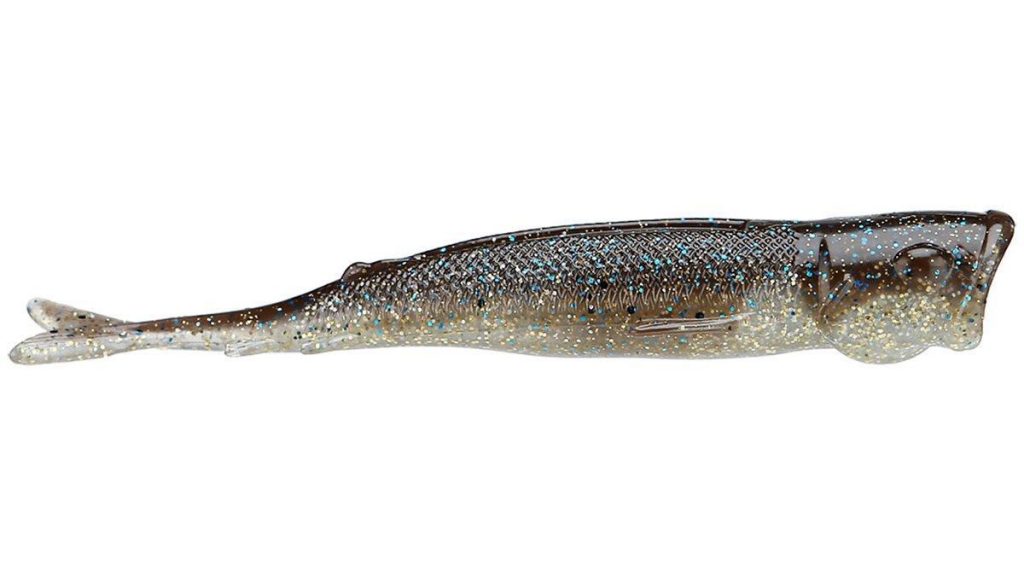 I don’t know of a single bass angler who doesn’t love topwater fishing. There’s just something special about drawing a big fish from its environment and watching it attack your bait. Not only is it an exciting way to fish, it’s also incredibly effective throughout much of the year; it catches both numbers and quality.

I’ve been hearing a lot about the Z-Man Pop Shadz lately. My buddies have been telling me some great stories about these unique topwater baits, so I started testing them several weeks ago. There’s one problem, though: Now I don’t want to put ‘em down.

The Z-Man Pop Shadz have a body shape very similar to a hard-bodied topwater popper; the body shape and cupped mouth is all there. But of course, you’ll notice that it doesn’t have any treble hooks. I was a little skeptical of this bait at first because I couldn’t wrap my brain around the concept, but it’s actually really impressive. 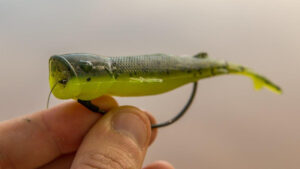 Essentially, the Pop Shadz are meant to be rigged on an worm hook; I’ve been primarily using a 4/0 Gamakatsu Offset EWG Worm Hook throughout my testing. Due to the buoyant ElaZtech plastic, the bait will float on top of the water even when used with heavy-gauge hooks. With hook pockets on both the top and belly of the bait, you’re able to bury the point of the hook into the plastic which creates an incredibly weedless topwater lure.

You can fish these baits in the same places you’d fish a hollow-bodied frog, but the smaller profile is an excellent choice when the bass aren’t feeding on particularly large forage. Because there are no treble hooks on the Pop Shadz, you’re able to fish it around vegetation and shallow laydowns without any snags or hang-ups.

You’ll have most of your success fishing these baits just like you would a traditional topwater popper—sharp, downward twitches of your rod tip followed by intermittent pauses. They spit water surprisingly well and while you can’t necessarily “chug” them like the hard plastic poppers out there, they seem to produce plenty of commotion, especially in calmer waters. 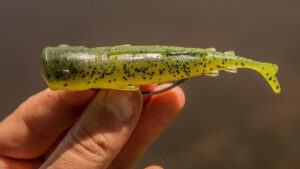 In my opinion, the biggest advantage of the Pop Shadz is their ability to skip. You can put ‘em anywhere you’d normally cast a floating worm, weightless stick worm or soft jerkbait, which will allow you to add a really unique dimension to your topwater fishing. They’re hugely effective when fished underneath docks and I have to believe it’s because bass rarely see topwater presentations in those areas.

Finally, I have to mention the ridiculous durability of the ElaZtech plastic. I have caught well over 20 bass with a single Pop Shadz and I expect to catch many more on it. It really is something special.

My experiences with them 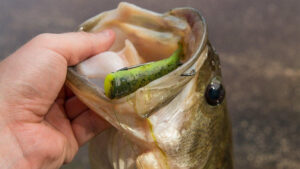 My home lake gets a bunch of pressure; too much, probably. As the weather warms up and the lake gets packed with recreational anglers, it can get really tough to get bites. The fish can get in a negative mood very quickly.

But I’ve been able to enjoy consistent catches while testing the Pop Shadz and again, I think it’s because they allow me to prey on the unfamiliarity of the bass. The grass bass are all used to seeing big, bulky frogs chugged over their heads and the dock bass are accustomed to getting pelted in the face by jigs galore; but this particular bait allows me to show them something totally different in both situations. 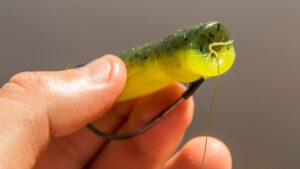 You can get away with fishing the Pop Shadz on a spinning reel and 10-pound monofilament or 20-pound braided line, but I suggest using a 7-foot medium-heavy casting rod with 50-pound braid. It’s important to remember that you’re not going to set the hook like you would with a treble-hooked hard plastic popper—you have to lay the wood to ‘em since you’re only using a single hook and solid hook penetration is paramount.

When you get a bite on the Pop Shadz, make sure you give the bass about a half-second before setting the hook; similar to a hollow-bodied frog hookset. It’s also important to set the hook straight upward in order to drive the hook point into the roof of the bass’ mouth.

This is a really cool topwater bait that I wish I discovered a bit sooner. When the water is calm and you’re dealing with pressured bass, I highly suggest giving the the Pop Shadz a try.

The Z-Man Pop Shadz are available at TackleWarehouse.com.