The bass can become terribly finicky during transition periods throughout the year. For what seems like months in my area, the bass have been in a really strange stage and from what I can tell, they’ve been scattered throughout the entire lake. Some spawned super early and some just got finished, so it’s just been a weird bite to be quite honest.

When this happens, however, I’ve found that fishing weightless soft plastics can be a major equalizer. Something about a slow-falling bait on slack line gets a bunch of bites for me. That’s why I’ve been able to fish with the X Zone Whiplash Shad so much lately. I was expecting it to be like most other soft jerkbaits on the market, but I’ve been very pleased by its unique action and ability to catch a bunch of bass.

I’ll quickly walk you through the things I like best about it.

The elongated tail of the X Zone Whiplash Shad is its most important characteristic in my opinion. It’s not a short, stubby tail like many other soft jerkbaits on the market. The added length isn’t just for looks, either. The action of the Whiplash Shad is incredible when you let it fall on slack line.

I like to cover a lot of water with this bait, but when it comes by an isolated piece of cover such as a stump or dock post, I’ll kill the action immediately. As it falls, the entire body quivers back and forth which gets a bunch of bites in tough conditions.

Because of this awesome action requires zero technique or rod movement from the angler, the Whiplash Shad is an excellent option for anglers of all skill levels. Anyone can catch fish on this bait. 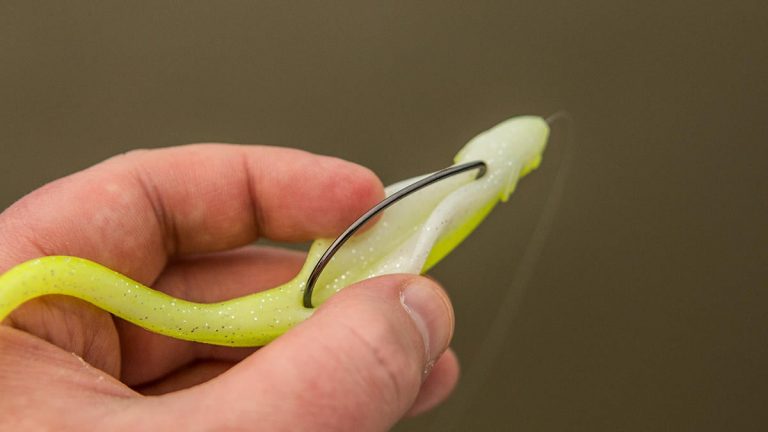 A lot of the soft jerkbaits I’ve tested tend to slide down the shank of the hook after just a few aggressive skip casts. That makes it tough for me because 99 percent of my soft jerkbait fishing involves skipping them under overhanging cover.

I’ve found that the Whiplash Shad stays on the hook quite nicely and can stand up to a fair amount of abuse. Whether you’re skipping all day long or getting a bunch of bites, you won’t be flying through bags of baits every single time you hit the water. When you combine that durability with a very reasonable $4.49 price point, the value is undeniable.

I think some anglers are less inclined to throw soft jerkbaits because the majority of them are most effective on spinning gear. Most of them are pretty lightweight, so they can be tougher to cast.

I’ve fished the Whiplash Shad on both spinning and casting gear. I can comfortably wing it around on both without any issues at all. This particular bait seems to have a higher salt content than many others you’ll find and I say that because it’s pretty darn heavy for a soft jerkbait. It still has that seductive slow sink to it, but it’s awesome to cast because of its weight. You can put this bait just about anywhere you want to.

Because old habits die hard, I’ve stuck with spinning gear and 8-pound test throughout most of my testing. With a medium-action rod, quick, downward twitches of the rod tip cause the Whiplash Shad to dart side to side as its tail freely swings behind. 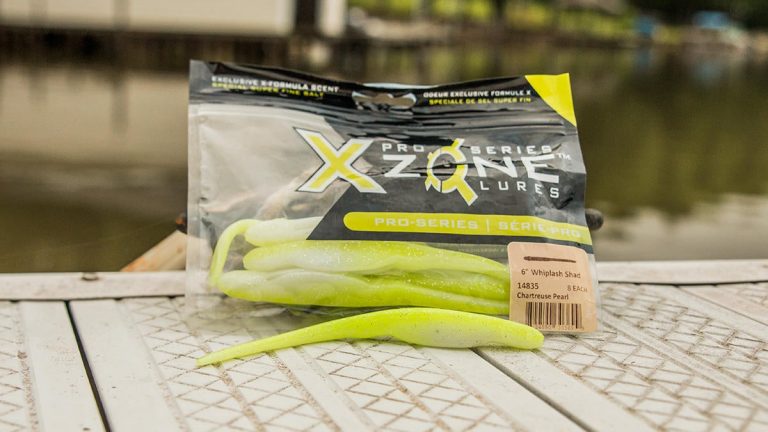 This bait is definitely a catcher. It’s pretty ambitious to try and improve upon the design of such a simple bass fishing bait, but X Zone has done a great job with the Whiplash Shad. If you’re dealing with lethargic bass but still want to fish quickly and cover water, this is an outstanding option.

The X Zone Whiplash Shad is available at TackleWarehouse.com. For their entire color selection, visit XZoneLures.com.