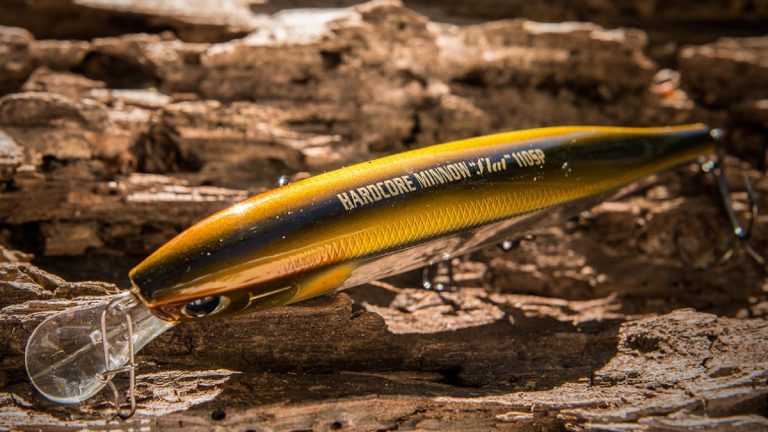 I’ve had a really strange relationship with jerkbaits. For years, I never really threw them much and I have no idea why. On the rare occasion that I did pick one up, it always seemed like I’d catch a fish on my first few casts. They’re definite fish catchers and until last year, that didn’t really click with me. I couldn’t tell you why, either.

I throw a jerkbait a bunch these days and I can’t even begin to count how many fish I’ve caught on them. Give me a breezy, sunny day with somewhat clear water and you can’t pry it out of my hands.

Luckily, we’ve been having a bunch of those sunny and breezy days this month which has given me the perfect opportunity to test out the Duel Hardcore Minnow Flat SP Jerkbait. I’ve learned a bunch about this jerkbait in the past five or six weeks and it offers everything I look for in a jerkbait, plus a little more.

I’ll quickly go over its most noteworthy characteristics.

You can cast this jerkbait a mile

Okay, maybe not a mile. But I can comfortably attest to its incredible castability. The Duel Hardcore Minnow Flat SP Jerkbait will out-cast most other jerkbaits I’ve ever thrown with minimal effort. It actually features an internationally patented magnetic weight transfer system that makes a noticeable different on every cast.

At the end of your back cast, right as you begin to launch it forward, you’ll hear and feel a very noticeable “click” in your jerkbait as the weight lunges towards the back of the lure. This allows for bomb casts, even facing into 20 mph winds. I’ve taken this jerkbait out on some of the windiest afternoons of the year thus far and proceeded to catch the fire out of bass without a single backlash during my entire fishing trip.

This weight transfer system is also quite useful as you’re targeting isolated cover such as stump rows and boat docks. You may not need the extra distance in these situations, but you’ll be blown away by your accuracy. You can sling this jerkbait just about anywhere you need to.

I’m really glad the designers included such an effective weight transfer system. Think about it: Jerkbaits work best in windy conditions and what’s the primary issue anglers have in the wind? That’s right. Castability.

The fear of backlashes won’t even enter your mind with this particular jerkbait. You can totally focus on the fish.

I’ve probably caught over 100 bass while testing it 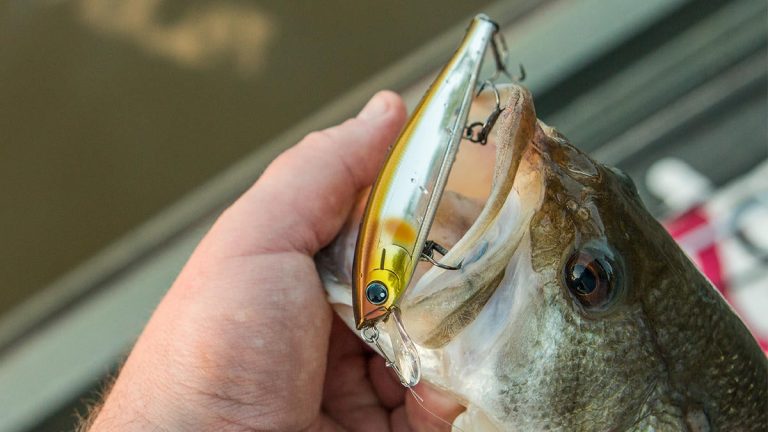 It’s tough to articulate how well they eat this jerkbait. I’ve been using the Flat SP 110 model which measures 4 3/8 inches and weighs in at 1/2 ounce. It dives to five or six feet on 12-pound test which, in my area, is a near-perfect depth.

Honestly, there hasn’t been much of a pattern to what I’m doing with this jerkbait. I’m looking for windy banks leading into pockets and just covering water. If it looks good, I throw the Flat SP 110 past it and more times than not, it seems like I get a bite. Needless to say, this has become one of my major confidence baits. I can’t see myself not having this jerkbait rigged up for the rest of the year.

It’s been pretty fun to feel how aggressively they’re hitting this lure, too. I’m just doing a fairly generic “jerk, jerk, pause” retrieve and they’re knocking feet of slack into my line. I’ll jerk and it feels like somebody cut my line. For that reason, I do suggest keeping a pair of longer needle-nose pliers in your boat when you fish with this jerkbait. They choke it and it’s important to get the hooks out of the fish quickly to ensure a healthy release.

This jerkbait has a super aggressive action to it which, again, has proven to drive bass absolutely insane. I was talking to Mitch from our video crew last week and I was telling him how easy this jerkbait is to fish. Lots of jerkbaits will wear you out after a day of fishing them, but the Duel Hardcore Minnow Flat SP Jerkbait doesn’t pull hard at all and you don’t have to jerk it like crazy to achieve the desired action. It’s a much more “leisurely” jerkbait to fish if that makes sense. I can fish it all day long and not have any hand cramps or forearm pain.

I think it’s so easy to fish because of the thinner polycarbonate bill. As you can see in the photo above, the width of the bill tapers down as it connects with the nose of the lure, which in my non-scientific opinion, seems like it should reduce resistance. With that being said, however, this is not a rock banger. You can certainly fish rock with it, but if you start dredging it in rocks too much, that thin connection point can cause bill failure. Either way, I’m not worried about it. I’ve only broken one bill after over 100 fish and at $7.97 per jerkbait, that’s a heck of a value.

Also worth noting is its ability to suspend perfectly. I know jerkbaits can suspend and/or rise differently in different water temps, but so far throughout my testing, I’ve had it suspending perfectly in 60 to 70 degree water temperatures. It suspends with a very slight nose-down stance which apparently the bass really like.

I decided to publish this review earlier than planned so you guys can take advantage of the massive closeout deal on ’em at Tackle Warehouse. They’re currently 43% off their normal retail price of $13.99. To be quite honest, I’d gladly pay $20 for these jerkbaits and that’s not an exaggeration. So to get ’em at $7.47 is a downright steal.

This is one of those special fish catchers you need to try. If you ever throw a jerkbait, you’ll be glad you read this review once you get your hands on the Duel Hardcore Minnow Flat SP Jerkbait. I promise.