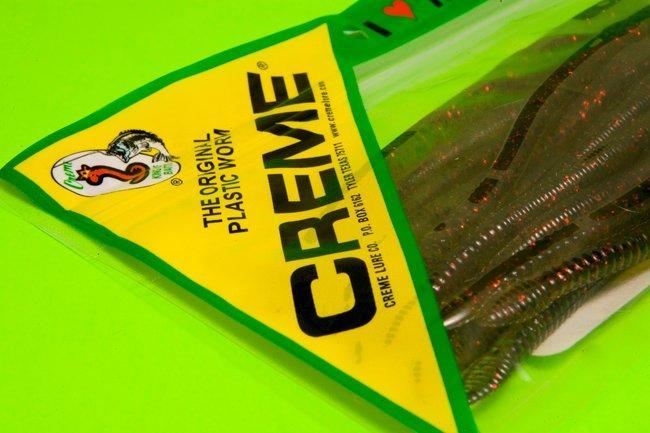 And the winner is … all of us. Thanks to the Nick and Cosma Creme melting some plastic on their stove in 1949 and pouring it into some molds, we all have all these great soft plastics and other soft baits to fish with for bass.

The Creme Wiggle Worm started the entire soft plastic sub section of the fishing tackle industry and it’s impact was immediate. The first packs were five worms to a card for $1 and they were sold by mail.

When they showed the product at the Cleveland Sportsmen’s Show in 1951, the distributor sold 9,600 packs in just a few days and the boom for soft plastics had begun.

Not only did Nick Creme give us the Wiggle Worm, but he also was one of the first to use “national field staff” to test his worms and introduce them to other anglers. A successful business venture that still works today in the bait business.

The Creme Scoundrel became their best-selling soft plastic of all time. It was originally sold as a pre-rigged worm and many of us learned to fish a worm as children on this rig. The Wiggle Worm is no longer available but the Scoundrel is still a very popular worm when bass are shallow in the Spring.

The success of Creme’s soft plastics really elavated fishing tackle and made it a viable business for a lot of folks. This one innovation moved fishing tackle forward more than any other in our estimation.

So thank you Nick and Cosma Creme for coming up with a seamingly simple idea and expanding our horizons for catching bass infinitely!

The No. 1 Most Influential Bass Fishing Lure of All Time is the Creme Wiggle Worm!