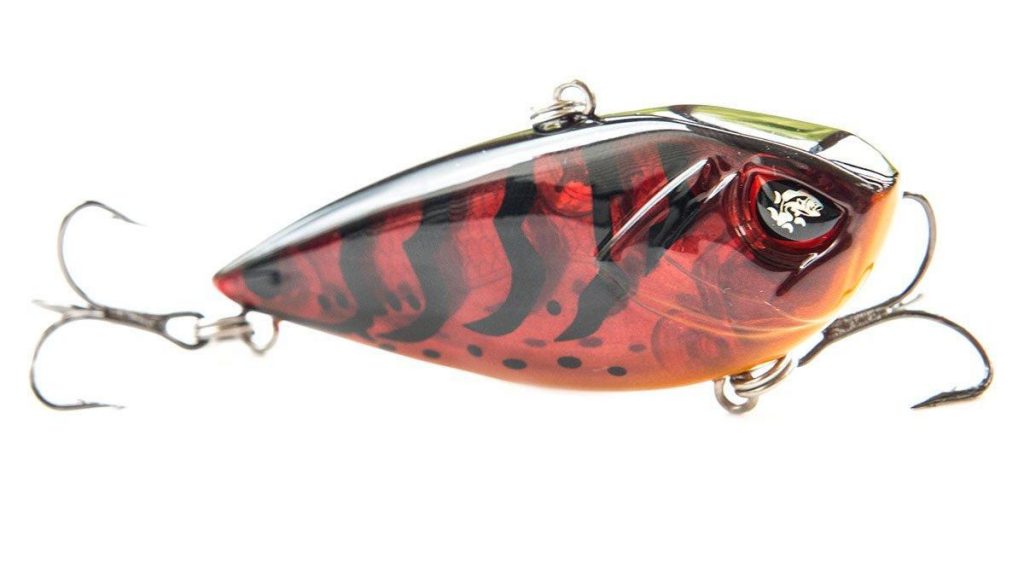 Lipless crankbaits are a very popular lure for anglers of all skill levels and the reason is pretty simpleâ€”they catch fish, even when the bite is tough. Thereâ€™s something about the erratic action, tight wiggle and loud sound that bass simply canâ€™t resist throughout much of the year.

I had an opportunity this spring to test the new Yamamoto Midasu Lipless Crankbait. Itâ€™s one of the newest additions to their hard bait lineup and Iâ€™ve heard a lot of folks talking about it, so I needed to see for myself what the hype was all about.

There are a lot of design aspects to consider when purchasing a new lipless crankbait, so after extensive testing and experimentation, hereâ€™s what I think you need to know about this particular lure.

Relatively quiet for a lipless crankbait 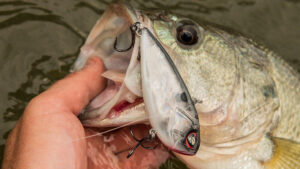 Iâ€™ve been conditioned to loud lipless crankbaits. It seems like most of the models Iâ€™ve used over the years sound like a maraca. You know the drillâ€”you take a new one out of the pack, hold the hooks stationary and shake it like crazy. Although many of these lures have different tones to their rattles, I must say that I havenâ€™t heard anything quite like the rattles in the Yamamoto Midasu Lipless Crankbait.

Essentially, the rattles sound a bit muted. I wouldnâ€™t consider them â€œloudâ€ by any stretch of the imagination. But believe it or not, Iâ€™ve actually been waiting for a similar-sounding lipless plug to come along.

My home waters get an incredible amount of pressure from bass anglers. The bass are relatively easy to catch throughout the winter months, but once April hits, you better be ready to share water with half of Georgia. When this happens, the bass fishing action turns off like a like switchâ€”they know whatâ€™s up. So it often turns into a game of â€œwhat can I do different?â€ if you want to consistently catch solid limits of bass.

Iâ€™ve been testing this lure during the busiest time of the year. Everyoneâ€™s been having to grind out bites throughout the day, but Iâ€™m telling youâ€”this has proven to be a great bait a tough bite. It hasnâ€™t been uncommon for me to catch dozens of bass in just a few hours on the Midasu.

Iâ€™m convinced this is primarily due to the quiet rattle. Itâ€™s a higher-pitched rattle than some of the lipless plugs I own and itâ€™s certainly not a â€œknockingâ€ sound whatsoever. Itâ€™s hard to explain via written word, but itâ€™s very different and noticeably muted. So far, it has been a big deal when targeting pressured bass. Think about how many guys chuck a lipless crankbait each weekend and how many of these lures bass see. They get smart to that stuff, so small tweaks and lure variations often make a major difference.

While thereâ€™s no concrete way to tell exactly why the fish have been bitingâ€”I wish I could ask â€˜emâ€”my gut is pointing me towards the unique rattles of the Midasu. 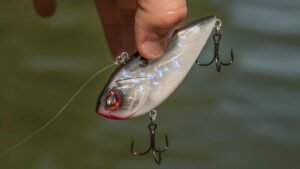 If you pinch the Midasu Lipless Crankbait in the very middle of its back, youâ€™ll notice that it points nose-down. A big percentage of this lureâ€™s weight is found in the front nose-area, which does a few different things.

First, it helps with castability in my opinion since it allows the lure to load easily on the back cast. Itâ€™s worth noting, however, that there are times when the Midasu will helicopter when you fire a cast. Itâ€™s not very often, but I believe itâ€™s because the wider nose and front-belly sections of the lure catch a little more resistance while in the air. This hasnâ€™t been a major problem thus far, as the the intelligently designed internal weight system facilitates some really nice casts with very little effort. 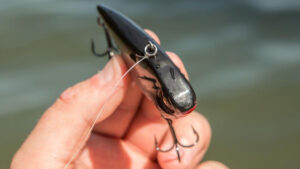 This weighting system also gives the Midasu a nice shimmy as it falls on slack line. Itâ€™s not something thatâ€™s going to vibrate your rod tip or anything, but itâ€™s certainly noticeable when youâ€™re fishing it in clear water. Remember, this lure has internal foiling, so it doesnâ€™t take a whole lot of action to put off a considerable amount of flash.

Finally, Iâ€™ve really enjoyed the nose-down swimming action of the Midasu. Lipless crankbaits get snagged a lotâ€”thatâ€™s just the nature of the beast. But Iâ€™ve enjoyed a surprisingly low number of obnoxious hang-ups when Iâ€™m fishing around hard cover. This swimming characteristic puts the flat, wide nose on the â€œfront linesâ€ more or less and helps protect the treble hooks. Iâ€™ve also found it very easy to â€œtickâ€ cover with this lure, which is a major key to getting more bites with lipless crankbaits. 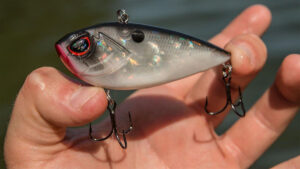 If youâ€™ve heard me harp about this before, I apologize. I really do. But I have to say it again: I do not like buying lures with bad treble hooks. I just donâ€™t understand the concept from a consumerâ€™s point of view.

Fortunately, that has not been an issue while testing the Yamamoto Midasu. These hooks are some bad dudes that have really been a joy to use. Theyâ€™re sticky sharp, they donâ€™t bend or flex like cheap tinfoil and so far, the tips have been very resistant to rolling or chipping. Iâ€™m a big fan of these trebles. 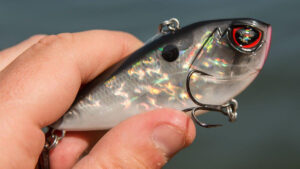 One of the most interesting design aspects of this lure, however, is the positioning of the hook hangers themselves. Itâ€™s easy to miss if youâ€™re not actively looking for it, but theyâ€™re spaced very far apart from one another. What does this mean for a fisherman? It means you can put really  big trebles on the Midasu without them constantly tangling with one another. In most situations, I donâ€™t upsize very frequently. But when I take a little weekend trip down to Seminole or Guntersville to rip lipless plugs through grass, you can bet Iâ€™ll hang some bigger hooks on this lure. 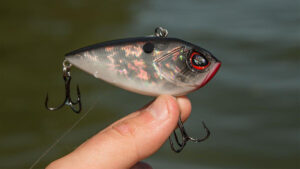 Iâ€™m glad Yamamoto decided to put the holographic foiling on the inside of the Midasu. I have a lot of really pretty lipless crankbaits in my collection, but years of hook rash and teeth marks have made their once-holographic finishes disappear. Theyâ€™ll still catch some fish, but if I pay top-dollar for a lure, Iâ€™d prefer the color stay on as long as possible.

With this design, the foil never gets touched by a hook or a bass. After weeks of abuse, the Midasu still emits a bunch of great-looking flash throughout the entire retrieve.

This is a solid lipless crankbait that is a lot of fun to fish with. The hook quality, hook hanger placement and nose-down action of the Midasu makes it an effective fish catcher when the bite is tough.