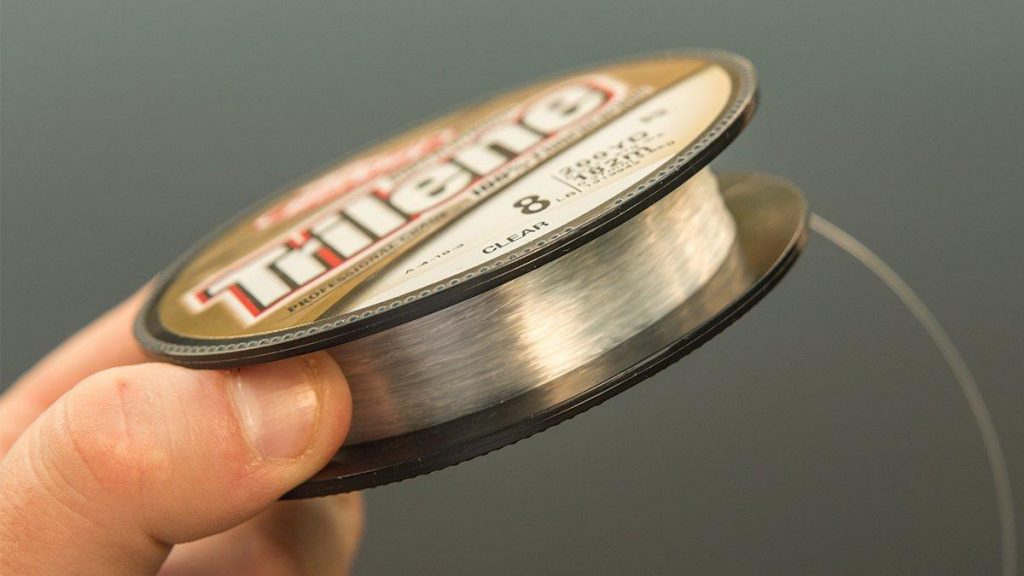 Once you have the fishing tackle for bass fishing, you need to learn how to spool fishing line on your reels and rig your lures before you can hit the water. Putting line on a fishing reel is fairly straight forward, but you do need to keep a few things in mind to avoid twisting, and unnecessary aggravations when fishing.

Essentially the steps to putting line on a reel properly regardless of fishing reel or fishing line choice include the following:

Secure the line to the spool tightly Uncoil the line off the spool in the opposite direction  Keep tension on the line Don’t overfill the fishing reel spool.

The first part of the process is taking the tag end of the fishing line on the spool and attaching it to your reel. The best way we’ve found to secure monofilament or fluorocarbon line to a reel is with an arbor knot. An arbor knot is basically a half knot tied around the main line with a half knot in the end of the line that acts as a “catch” when you pull the line tight. Here is a quick tip on how to tie the Arbor Knot.

For attaching braid we like to just tie a couple knots and then tape the braid to the spool with a small slice of electrical tape. Because most braids have a coating on them, an arbor knot just slips and other knots just keep getting loose. If you’ve ever had that sensation that your drag is slipping under light pressure when using braid on a reel, it’s probably not your reel but how you attached the braid to your spool.

Now if your spool has holes in it (called wiffling), you can pass the line through a hole and back out another and tie off a simple knot. But not all spools are wiffled so it’s a good idea to learn the arbor knot or use a small piece of electrical tape to give you a secure connection to the spool.

Unspool in the opposite direction of spool

Some folks spool line on backwards and then wonder why the line coils and kinks on them uncontrollably. The fact is monofilament has memory. Fluorocarbon has even more memory. Braid has virtually no memory. So when spooling nylon lines, it’s important to note which direction line is coming off the filler spool and then reel it onto the reel’s spool in the corresponding direction.

I tell people to envision a cassette tape. One side of the cassette tape unwinds the tape off and then the other side picks it up. They both turn in the same direction but one comes off the top and the other takes it on from the top and comes off on the bottom. So think of your filler spools and reel spools similarly

It’s easier with baitcasters. Set the spool in a spooling station, a tennis shoe, between some Plano boxes and make sure line is coming off the top of the spool. Run it down the guides of your rod, through the level wind guide on the reel and secure it to your spool.

For spinning and spin cast reels, I tell people to set the reel on a table top or the floor and pull line off of it. If the line is coming off the spool counter clockwise it is right. If it is coming off the spool clockwise, you need to flip it over. Keep in mind the labels are put on filler spools last. So the label side does not necessarily mean you have the spool right side up for spooling. So check how the line comes off first.

If you spool line onto a reel against the grain, you will wind it on a few times, open the bail or put it in free spool mode and the line will literally “jump” off your spool. Un spool it, flip the filler spool over and start again.

Loose line on a fishing reel will cause the angler problems. So anglers need to spool line on to the reel under tension. The main reason is to prevent what is called an overrun, also known as a backlash or bird’s nest on the fishing reel. An overrun is nothing more than the spool spinning faster or further than the lure carries the line off the reel.

What happens when you have loosely spooled line is the line will dig into the other line on the spool on hooksets, casts, snags, etc. This digging can cause backlashes, frayed or damage lines and even breakoffs.

Spooling on tightly also helps the fishing line gain memory for the spool. This  will alleviate a lot of tangles and backlashes as well.

The simplest way to keep tension is to run the line off the spool, down through the guides and secure it to the reel spool. Then as you start to reel it on, pinch your fingers on the line or pinch the line down on the rod as you wind it onto the spool. Some spooling stations have tension knobs that you can add tension to the spool to put the line on tight. But I find fingers do just fine if you don’t pinch too hard and give yourself line burn.

Avoid under or overfilling a spool

A common mistake anglers often make when taking line off a filler spool and putting it on the reel spool is overfilling the reel’s spool. It’s hard to keep track out of how much line is going on your reel. You could hypothetically do some math and figure out how many inches of line are in a single handle turn of the fishing reel and then count the turns it would take to get to a certain distance of line that the reel says it holds.

However overfilling a reel is just as bad as not putting enough line on the reel. If there is too much line on the reel, the line may absorb water or get more brittle and take up more space on the reel. You will then have line slipping off the edge of the spool on casts and causing tangles and backlashes.

On the flip side of that, if you have too little line on a reel, there will be more friction and casting distance will be compromised. So we basically give it the eyeball test. The general rule for most reel manufactures is 1/16 to 1/8 of an inch from the edge of the spool. You want to put enough line on the reel so that it casts well, but you still want to be able to see about 1/16 or a little more of an inch of the spool when it’s fool. It gives the line room for expansion but it also is close to the edge of the spool so it unravels easily and smoothly on a cast.

One cost conscious effort anglers have made is to put backing on their reels. Backing is simply a cheaper line that you don’t have to change as often that you spool onto the reel. Then you connect that line with the line you intend to fish with and spool the new line on to finish filling the reel. So instead of using 100 yards of fluorocarbon on your reel. You might only use 40 or 50 yards. So now you’re 200 yard filler spool will fill 4 or 5 reels instead of 2.

I will use a low cost monofilament usually for my backing but others make a good case for using braid for backing that might be worth a look.

Once you’ve got the line on the reel, it’s time to rig up for fishing. Read our Bass Fishing Knot Guide and 5 Soft Plastic Bass Fishing Rigs Every Angler Should Know articles to get your lures ready to fish.

Check out our features on how to cast fishing lures and the 8 factors affecting casting distance and our feature on choosing fishing line for more information related to this topic.