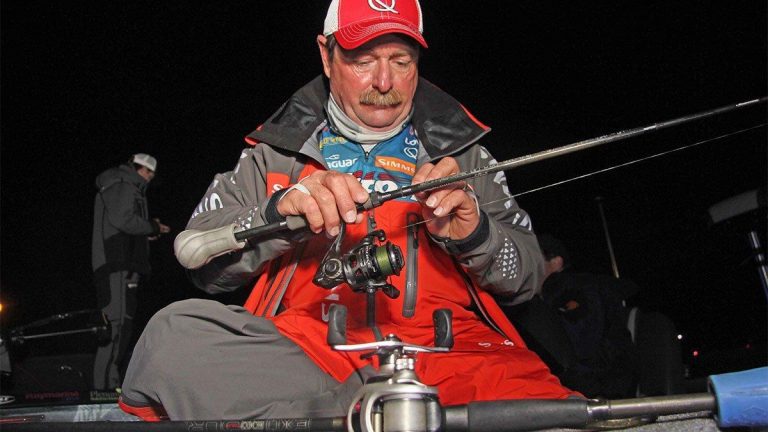 And while the son of a former University of Florida sociology professor seems to sport a perpetual smile beneath his mustache, it turns out bass are far more moody—and believe it or not—he chooses what type of rod and reel he uses based on the personality of each bedding bass he encounters.

“The very first thing I do when I see a bass on a bed is study its personality,” Grigsby said. “Is it super skittish? Does it swim way off? Does it stay put? Those are questions you should ask as you try to analyze your chances of that fish biting and subsequently, what lure you cast first.

“In the old days, people thought you had to finesse fish for spawners and be really stealthy with a spinning reel and smaller lures, but that’s certainly not always necessary. Some fish are super aggressive and will choke a small creature bait tied to 65-pound braid the first time you cast it in there. If I can get away with it, I’d much rather use a baitcasting reel simply because I can land that fish faster.”

“You can tell that on the first day of practice, the bass haven’t seen a lot of baits and they’re way more likely to eat a lure on the first cast. But as the week wears on and everybody has pounded on them, they spook easier and that’s when you have to break out the spinning reel with 8-pound fluorocarbon or 20-pound Seaguar braided line.

“Sometimes I’ll throw straight braid with no leader. The thing about it is, 20-pound Seaguar braid on a larger-spooled size 30 Quantum Smoke spinning reel behaves as smooth as 10-pound line, but has the true strength of 20.

“Sure, we’d all rather winch one in quick on baitcasting equipment, but when they’re not biting aggressively and you have to use spinning tackle, there’s zero reason to fear catching a giant with lighter tackle. The whole key is to be patient and let them run as long as you need to. You wind some line in, you let ‘em run. You wind some line in, and you let ‘em run. It’s just like catching a tuna in saltwater.

“I remember catching a giant bass from a bed with 8-pound monofilament on a spinning reel when I won at Sam Rayburn years ago. I just had to let it swim way out into the middle of the cove to finally tire itself out. It was about seven minutes after I hooked it before I could finally land it. But that’s okay; you just have to be patient.”