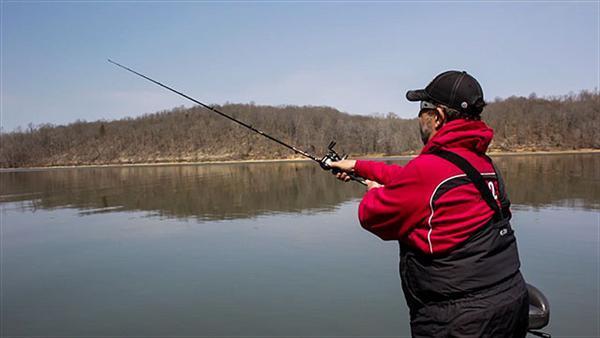 Casting a baitcaster seems daunting at first to anglers new to these types of reels. When casting spin cast and spinning reels, the line unwinds off of stationary spool. With baitcasters the spool spins to unwind the fishing line. This is an efficient system for using heavier braided lines and getting longer casting distances because you don’t have as much drag on the stationary spool that you have with spinning reels. However you have to deal with the dreaded overrun, also known as a bird’s nest or backlash.

So the aim of this guide will be to help you master casting a baitcaster with little to no backlash or overrun.

Casting a bait casting reel comes down to the following steps:

Every baitcaster has a tension knob. This puts more or less tension on the spool to make it spin less or more freely respectively. The easiest way to set the tension to the lure weight is to reel your lure up to the tip but leave about 1 foot of line. Now hold your rod out straight in front of you. Tighten your tension knob until it’s fairly snug. Now press the thumb bar to release the line. The lure should not drop. Now slowly and slightly start backing off the tension just enough until the lure just barely starts to drop. When it does let it fall to the ground and it should stop and the reel not overrun when it does. Then you have your tension close to start learning to cast.

Step 3: Load and Unload the Rod

This part is where everything comes into play. Reel the lure up to about a foot or two from the tip of your rod. You want to place your thumb on the thumb bar and depress it while moving your thumb to hold the line. As you do this, bend your arm and bring your rod back smoothly to load the line and lure behind you and put a bend in your rod and then swing your arm and rod forward faster than you went back. This change in direction and speed up will give the lure a lot of propulsion forward. Keep your eyes always on where you are throwing and nowhere else. And when your rod comes forward, aim your rod and your cast to where you are looking. Just as the lure is about to hit the water, stop the spool with your thumb. Let the lure land and then engage your reel. 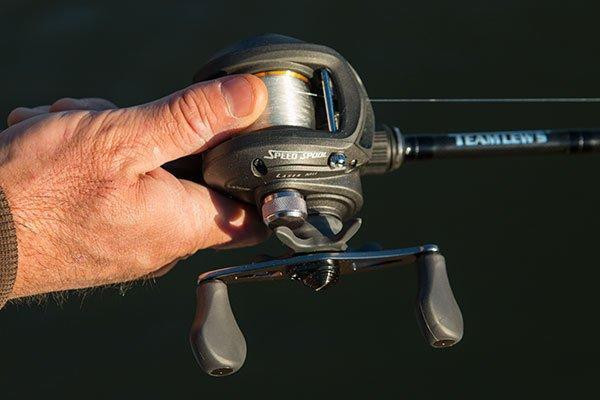 With more and more practice and time with your baitcaster, you will train your thumb to control overruns like a champ. There is another trick that helps with the process. But watch this quick video on what to think about as you cast with a baitcaster and then we’ll get into a trick to speed up your learning curve with bait casters.

How to Cast a Baitcaster Video Instructions

Terry Brown does a good job explaining how to cast a baitcaster in this quick and informative video lesson. There is good explanation of turning the reel up on its side to make your casts smoother and to save your wrists with a more natural motion. And also to think about throwing upward until you learn to control casting your lures with your thumb. And as you get better you will start incorporating roll casts, pitches, flips, skips and more.

How to Use a Baitcaster Reel

The advantages of baitcasters are numerous. If you can learn to use a baitcasting reel with some proficiency it opens up a lot more fishing opportunities for catching big bass especially in places where a lot of cover necessitates using heavier line and more powerful rods then you will likely find with spinning and spin cast gear.

So if the baitcasting reel is mastered you can do things like fish topwater frogs through slop and vegetation, punch mats, skip docks, fish rocky areas. You can also make pinpoint precise casts with a baitcaster. I grew up fishing spinning gear and can cast better than most. But I am way more accurate with a baitcaster. I can just do a lot more with a baitcaster. It’s one of the reasons I’m excited about BFS. Because I’m able to employ BFS baitcasters to cast to crappie and panfish just like I do in bass fishing.

I like baitcasters because I can use 20-pound line and throw extra large swimbaits and bigger baits to chase trophy bass. I use a lot of roll casts even with large lures. I skip a lot of soft swimbaits way under docks and catch good fish doing that. So mastering your thumb control with baitcasters opens a lot more doors.

How to Use a Baitcasting Rod

Likewise, mastering the baitcaster reel, means you can employ beefier rods and a lot more rod actions, which is one of the reasons I argue you can be more accurate with a baitcaster than a spinning rod. A spinning rod comes in 2 or 3 actions usually while baitcasters in a single line of rods might come in 20 or 25 power and action combos. So you can match a bait to the perfect rod and have unique accuracy with your presentations. And I like that most good baitcasters allow you to swing fish which can sometimes be a big deal, especially in tournament scenarios.

The Tape Trick for Learning to Cast Baitcasting Reels

When I first learned to throw a baitcaster, it was an act of frustration. Either I couldn’t cast if far enough, or I cast as far as it would go before a web of over-spun monofilament clogged the reel. If you’re about to learn to cast a baitcaster or you want to improve specific casts like skipping baits with a baitcaster, there is a way to minimize the frustration during the process.

All you need to do is reduce the amount of overrun. This is easily accomplished with electrical tape and a pair of scissors. Usually about 3 to 4 inches of electrical tape will work. Cut a nice straight piece of tape with the scissors.

Now with the rod and reel in hand in your practice area. Make your longest cast with a practice plug or old lure without hooks. Now pull out another 10 feet or so of line. Then take the piece of tape, and while pushing the end of the line coming off the spool to one side of the spool or the other, place the tape on the line as you turn the handle.

The object is to wrap the tape onto the line in the same direction that it will reel your line up. But once you have the tape properly placed, press it onto your line snuggly with your thumb. Then reel up all the line.

The reason a bird’s nest is so hard to get out is because it spins line off the spool so deep in a very small space. With the tape, the bird’s nest isn’t able to go deep into the spool.

Now you’re ready to learn to cast your baitcaster like a pro. The thing to remember is that your thumb can work better than any brake system out there because your brain is attached to it. Most braking systems employ centrifugal, pinch, magnetic or some combination of the three.

Magnetic brakes control the spool speed evenly so as the speed of the lure to the target slows the spool slows down because the lure is applying less force on the spool as the lure slows down.

Now if you turn all of these things off, the spool will spin much faster than the lure is traveling after the initial instant the cast begins. The spool is launched into gear at a rapid pace with nothing to slow it even though the lure is slowing down the entire length of the cast because of gravity and other factors (wind resistance, water resistance while skipping, etc.).

The only thing to keep the spool in check with the lure’s decreasing speed is your thumb. So your thumb pressure needs to be applied with the understanding the cast is at maximum force at the beginning of the cast and it minimizes throughout the cast.

This means you need sharp pressure as you start the cast or your reel will instantly over wind its spool. As the lure continues, you back off the pressure with your thumb and feather the line out before stopping it just as it enters the water.

Most pros never let their thumb completely off the line as it unspools on a cast.

But it’s a dynamite way to practice your casting without picking backlashes and destroying your line. Once you train yourself on how the line should feel on your thumb throughout each cast, it will soon become second nature. It will also make buying reels easier because all the adjustments seem to be a little different from one maker to the next. When you take the adjustments out of the equation, you can cast far with any good quality reel.