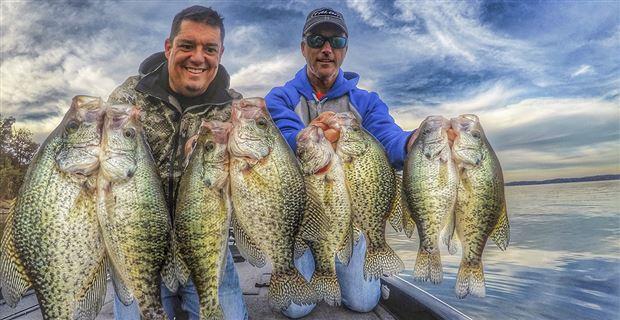 The experimentation part of fishing drives me as much as anything. In the past few years, crappie fishing piqued my interest as mush as bass fishing because I had a lot to learn about artificial lures for crappie. For years, I thought to be a consistent crappie fisherman, you had to use minnows, but I fish for the sport of tricking a fish into biting something fake. In my experimentation, I stumbled onto one style of crappie plastic for most fishing situations.

My crappie tackle got to be as bad as my bass tackle in volume. I was trying to carry every color of tube, curl-tail grub, shad body and other make of crappie style plastics in my boat because I was still learning about how the fish relate to cover, the bank and open water on Kentucky Lake. Sometimes having too many options can give you analysis paralysis.

I made a switch last fall to just the shad style bodies in a few small boxes. I still carry several colors and shapes but I honestly believe I could get by with one shad body in a handful of colors to meet water clarity needs. I had one of the best seasons of crappie fishing I’ve had because I think I was focused more on the where than the what.

I used fish a curl-tail grub if I was casting, then a tube if I was vertical fishing and then a shad style body if I was somewhere skipping docks. I found out two falls ago, that the big crappie would bite those shad tails cast the banks on a steady retrieve just as well. That led to me fishing it around brush and it was equally effective there. I thought they didn’t have enough action, but crappie retrieves are interesting. It seems like no motion is equally effective for crappie as a lot of motion, if not more effective.

Then I started playing with presentations. The shad tails worked on a straight retrieve. It worked tightlining over cover. It worked yo-yoing it. It worked vertical jigging it. The single shad tail system basically worked for every type of crappie fishing I tried. I was actually blown away how many crappie I could catch with these baits out of a single pile.

The 3-pronged approach to cover

I am a believer that anglers can put fish on guard, and the more on guard fish are, the tougher they are to catch. Weather and water clarity can put fish at more ease and allow you to get closer when fishing, but on sunny, calm days, especially in clear water, distance is your advantage.

So I start casting over piles first from about as far as I can cast. On a hot brush pile with active fish, you’ll never get close to the pile. The fish will run out and grab the plastic before it gets near the cover. As you catch more fish, they will not bite as frequently or quickly.

After that I will get on top of the pile if it’s not too shallow, and drop my jig down next to the pile and fish around the base or off the sides of it. Sometimes your one casting angle doesn’t allow you to get to fish that might be on the other side of the pile near the bottom. So vertical jigging can yield a few more fish.

I do all of this on a 6-foot, 6-inch or 7-foot medium light Lew’s Mr. Crappie rod with a Daiwa reel and 6-pound Vicious Hi-Vis Monofilament.

Some of my favorite crappie plastics

I’ve used a lot of different plastics now. I really fell in love with the shad profile baits first and still use those most often. But I also like some of the more solid body with flat tail options that have evolved in recent years. Again I think you pick one or two that have some nice actions and get a handful of colors to start.

Some of my suggestions would include Bobby Garland Baby Shads, Minnow Mind’Rs and their new Crappie Shooter. I caught the majority of my crappie this past season on a Baby Shad or Minnow Mind’R in a handful of colors.

I also like Strike King’s Mr. Crappie Slab Slanger and Shad Poles. Both are great producers and were my staples in 2015 when I started figuring out the whens and wheres of the shad tail system.

And finally, I like newcomer Jenko Fishing’s Big T Fry Baby and Paddle Fry baits. That Paddle Fry accounted for a lot of crappie on brush late this past season for me as I got literally a handful of the baits and had to use them sparingly before they were available on the market. I caught crappie reeling, tightlining, vertical jigging and shooting them.

I like a pearlescent color like Bobby Garland’s Monkey Milk for clear water. Also a chartreuse/white type mix as well like Ice Out in the Minnow Mind’R. As the water gets darker or dirtier brighter or more obvious contrast works well. I like the Strike King Slab Slanger in Hot Chicken or Refrigerator White or the Jenko Paddle Fry in Watcha Mocallit, Blue Moon and Pink Ghost.

Hopefully with these suggestions you can come up with your own crappie fishing system on your own lake and feel confident you will catch them with a handful of colors in shad style plastics.