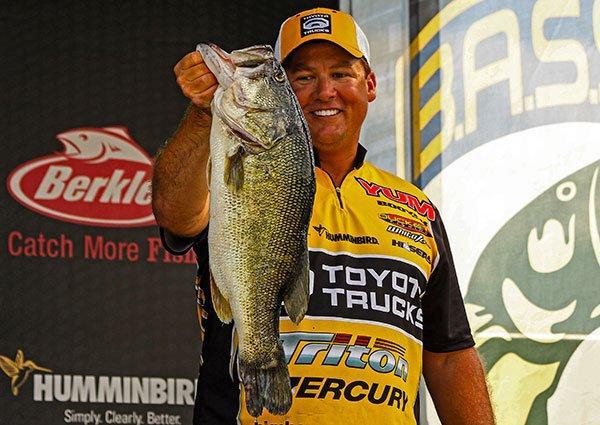 Terry “Big Show” Scroggins’ stature can shadow those of us a bit smaller in frame. And for the past several seasons, the 6-foot-tall, 235-pound Floridian has largely been perceived as a lover of the flipping stick and thick vegetation. There’s truth to that. But throughout the 2012 Elite Series season â€¦ truth â€¦ was not always reality.

The numbers don’t lie. According to the Toyota Tundra Bassmaster Angler of the Year standings, “Big Show” proved to be the third best angler on tour this past season. And he caught more than half the keepers he hauled to the B.A.S.S. scales using finesse techniques and a spinning reel.

Q: How does it make you feel when after nine seasons on tour, some folks still perceive you as a Florida guy that primarily likes to pitch lures at thick vegetation?

Scroggins: That’s fine, it is one of my strengths, but over the years, I’ve learned versatility is the key to long-term success as a pro angler. And to be truthful about it, when the Elite Series went to a $5,000 entry fee, I realized quickly that a spinning reel was a way to cash checks and gain points when things got tough.

Q: How were you able to learn finesse techniques so quickly?

Scroggins: I got one heck of an education at a Bassmater Southern Open on Lake Martin, Alabama back in 2002.  I was paired each day with a different pro, and all three of the guys I drew-out with knew something about finesse fishing in a tournament in which I didn’t have a clue. Woo Daves taught me how to catch them with a split shot around docks, J.T. Kenney showed me how to pair tungsten weights with a glass bead, and Fred “Taco” Bland taught me how awesome a shaky head produced.

Q: Describe a couple of classic scenarios, aside from the clear water smallmouth waters up north, where we could expect to find you throwing finesse tackle.

Scroggins: That’s just it, finesse tackle and tactics are perceived to be used only in very specific situations. The truth is, I’ll throw it anywhere and anytime the fishing is tough. I caught 4-pounders off spawning beds, and a 9-pounder out of a brushpile with a spinning reel this past season. So from rocky points to rip rap, and even around brushpiles, if you’re struggling to get a bite, you better start thinking about how to catch them with a spinning reel.

Q: Give us some basic guidance on getting started with finesse tackle by choosing a couple basic tackle set-ups.

First off, a 6-foot, 8-inch medium-heavy power spinning rod is about the only finesse rod you’ll need. Then, there’s more good news, if you’ll use 10-pound braid as your main line, and simply tie various leaders as needed during lure changes to that 10-pound braid, you can fish that same spool of braid for 6-months, and all you ever have to change is a few feet of fluorocarbon leader. Swindle taught me that, and it’s true. I fish for a living, and still, I only changed the 10-pound braid on my spinning reel twice last year.

Now, as far as what lures I use, I like a 1/8-ounce shaky head tied to a 6-pound fluorocarbon leader, tipped with a trick worm in either green pumpkin or red bug.

If I want to leave a bait in one spot for a long time, I’ll use a drop shot, and it’s not always a vertical presentation. For example, I might be dragging a drop shot super slowly across the top of a point.  For drop shotting, I use a 6-pound fluorocarbon leader, a No. 1 drop-shot hook tipped with a 6-inch finesse worm, and a 3/16-ounce weight.

My third finesse set-up is a split shot rig that consists of a 12-pound monofilament leader with a No. 8 clamshell-shaped weight crimped on the line right next to the hook that holds my trick worm, much like a Texas rig.

Q: Finally, are you surprised that you used a spinning reel in 5 of the 8 regular season Elite Series season events en route to finishing third overall in the Toyota Tundra Bassmaster Angler of the Year Race?

Scroggins: No, not really, although I didn’t realize it was quite that much until you walked my memory back through the schedule. But again, at the end of the day, a finesse presentation saves your butt as a professional angler. It helps you get paid by consistently generating bites, and I look forward to using it again next year.