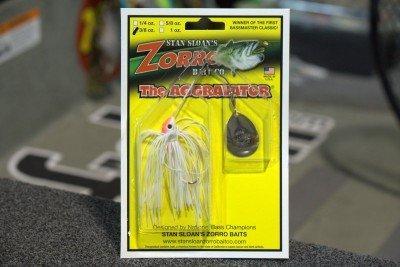 Stan Sloan was an early pioneer in bass fishing and was one of the first guys to fish B.A.S.S. In fact, he won the first Bassmaster Classic on his bait.
He was an innovator, loved to tinker with baits and loved to throw a spinnerbait. In those early days, he started a company called Zorro Bait Company and made a little of everything. Spinnerbaits, buzzbaits, jigs and plastic products all followed his spinnerbaits, his first love,  and today Buryl Shirley and his team at Zorro continue to innovate but maintain some of the early creations designed by Stan. They recently announced a new rattling umbrella rig called the Aggravator Rattlin’ Umbrella  Rig  too.
The Aggravator Short-Arm Spinnerbait is a mainstay for river anglers and one that has stood the test of time. The Colorado style bait has a tapered wire, a uniquely bent short-arm and a No. 5 Colorado Blade attached with a high quality  swivel. The tapered head allows the bait to run true without rolling and  the hook is protected by a stainless steel  twin weed guard.  A small trailer like a small grub or a split-tail works great. We like to rig the grub with the curve in the grub riding up.
The Aggravator can be slow rolled or ran at a high speed depending on the conditions. When fished just under the surface it makes a great gurgle bait, almost like a buzzbait. It comes in an amazing 79 different colors and costs $5.69. It comes in 1/4, 3/8, 5/8, and 1 ounce sizes.
You can learn more about Zorro Baits by going to StanSloanZorroBaitCo.com, or you can buy them by clicking here.
Next
Contact Us