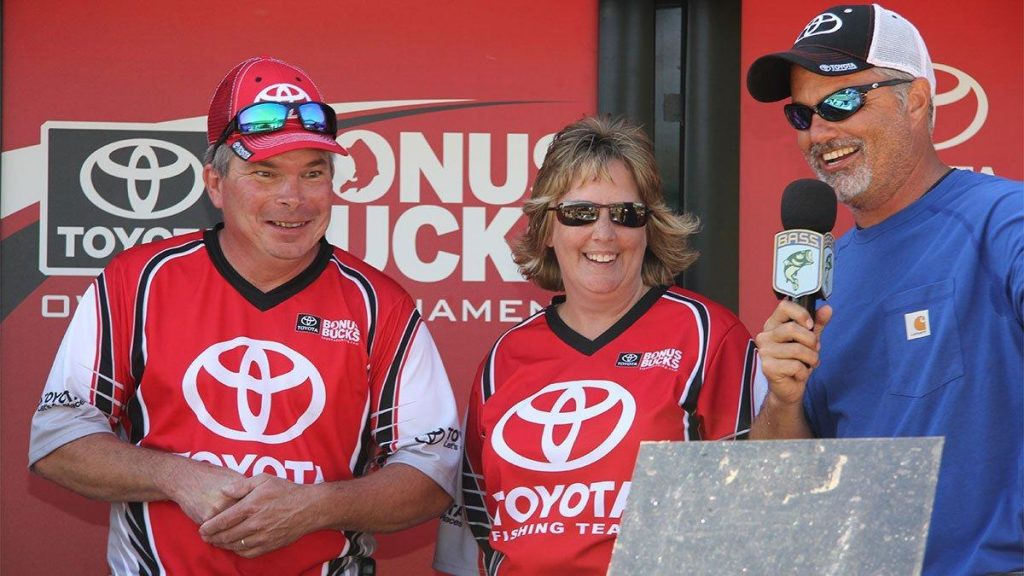 When New Hampshireâ€™s Wayne England needed a team tournament partner a few years ago, his bride Lyn graciously volunteered to do what sheâ€™s done throughout their 26-year marriage. She stood by her man, this time on the deck of their bass boat with a spinning rod and drop shot rig in hand.

â€œWeâ€™re tired, traffic was busy in places, we left home at 3:30 a.m. yesterday morning and it took us 36 hours to get here with a couple naps and two quick stops for breakfast,â€ said Wayne, sitting shoulder-to-shoulder with Lyn on a picnic table, awaiting the rules briefing conducted by B.A.S.S. on the eve of the 4th annual Toyota Bonus Bucks Owners Tournament on Toledo Bend.

Two days of travel and time off from Wayneâ€™s job at the New Hampshire Department of Transportation and Lynâ€™s role as an Employee Services Manager at a bank didnâ€™t even allow the soft-spoken couple time for practice on the massive 185,000-acre reservoir.

And yet, they seemed unconcerned. Clearly this wasnâ€™t about winning; but instead, something deeper. Sharing an adventure togetherâ€”through fishing. 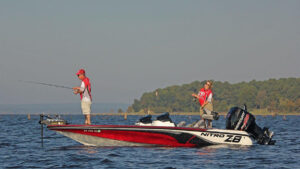 â€œYep, weâ€™re here for the adventure. Thatâ€™s the biggest reason we signed up for this and we just love to fish,â€ grinned Lyn.

â€œItâ€™s our first year to be registered for Bonus Bucks,â€ explained Wayne. â€œOur 2014 Tundra Crew Max only has 22,000 miles on it. We used to tow with an F-250, but I really think this Tundra tows better and offers way more comfort.â€

While Wayne struggled to only name one thing that he likes best about his Tundra, there was no hesitation when asked what lure they favored most.

Four less-than-weighty bass later, the Englands enjoyed a trip across the B.A.S.S. stage, ate a free lunch courtesy of Toyota and began the 32-hour trek from East Texas back to New Hampshire.

â€œIt was a blast. The tournament was so well run, the pros were awesome to talk to, it was all great,â€ Wayne said. â€œWhen we met Jordan Lee at the Carhartt booth, he was so impressed by the drive we had made to be there that he gave Lyn his business card and told her if we ever wanted to come to Guntersville, heâ€™d take us fishing on a free guided trip. Iâ€™m pretty sure weâ€™ll take Jordan up on his offer and Iâ€™d drive that far all over again to attend another Bonus Bucks Tournament.â€