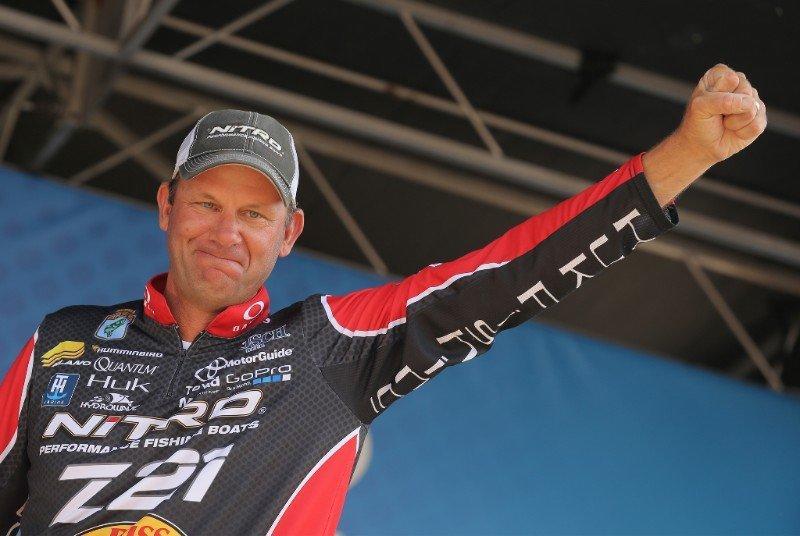 A little over a month ago, many professional fishing fans were wondering out loud, “What’s wrong with Kevin VanDam?”

Now those same fans must be wondering just how many gigantic moments VanDam has ahead of him.

After recording his 21st career victory at Louisiana’s Toledo Bend Reservoir in May, VanDam won again Sunday, coming from behind to claim the $100,000 first-place prize in the Busch Beer Bassmaster Elite at Cayuga Lake. After going five years between victories, the Michigan superstar has now won twice in seven weeks.

VanDam went into Sunday’s final round in third place, almost 2 pounds out of the lead. But a final-day catch of 15 pounds, 7 ounces put him over the top with a four-day mark of 71-13. Jordan Lee, a 24-year-old Alabama angler who led going into the final round, finished second with 70-12.

“You just never know how things are going to go out here,” said VanDam, who extended his own B.A.S.S. record with his 22nd career win. “I’ve said it many times before. It’s really hard to win against these guys.

“I feel pretty lucky today, for sure. I didn’t have a great day today.”

Unlike Toledo Bend, which he described as the “toughest tournament he ever won,” VanDam went into the Cayuga Lake event with a lot of confidence based on what he’d seen in practice. He used a variety of patterns throughout the week and exploited the lake’s solid populations of both largemouth and smallmouth bass.

He spent part of his week sight fishing for bedding bass on the lower end of the lake. For that, he used a combination of baits, including new Strike King lure called a Half Shell, a 4-inch wacky rigged Strike King Ocho and a Strike King Dream Shot.

“When you’re sight fishing, every fish is different,” VanDam said. “I had to show them several different baits and different colors. One would bite chartreuse, the next one would bite green pumpkin and the next would bite KVD magic.

“You never knew if it was going to be something natural or something loud. Some would want the tube instead of the drop shot.”

Sight fishing produced 20 pounds for VanDam on Thursday. But as is often the case in a sight fishing tournament, his fish became more depleted as the week went on.

That forced him to rely on other tactics to stay among the leaders.

He spent some time flipping the lake’s expansive grass flats in search of big fish. Then he also targeted cruising fish in the shallow grass.

“One thing I was doing was fishing for postspawn and prespawn bass that were just coming up in stages,” VanDam said. “They were cruising on the inside grass lines. I was catching them with a wacky rigged Ocho.”

VanDam’s catches declined each day, with him catching 18-15 Friday and 17-7 Saturday.

After Saturday’s semifinal round, VanDam said he believed a little extra wind would help his results. But the wind blew harder Sunday, and his weight actually dropped again to 15-7.

“Today the wind picked up a little bit, and I actually caught three on a KVD jerkbait,” he said. “But I was really surprised it didn’t help the fishing more.”

With such a low weight, VanDam didn’t exactly like his chances as he headed back toward the weigh-in.

“You see that a lot on Sundays in these tournaments,” he said. “The pressure of the week gets to the fisheries, but I didn’t think it was going to happen here as good as it’s been all week. With 15 pounds, I was thinking I was not going even make the Top 8.”

The victory was sealed when Lee weighed in 12-10 during the final weigh-in, finishing 1-1 behind VanDam.

“Jordan has proven he’s a great fisherman,” VanDam said. “He was in the driver’s seat today, and I’ve been there plenty of times too. Sometimes it just doesn’t happen. The key in a Bassmaster event is to just have yourself in contention going into the final day. If you do that enough times, and you’re confident enough, you’re going to win one.

“Today, I might have stolen one, but I’ve been on the other side of it too. It all balances out.”

Besides earning $100,000 for first place, VanDam qualified for the Bassmaster Classic Bracket tournament, to be held on the Niagara River out of Buffalo, N.Y., July 19-22.

In that event, the Top 8 finishers from Cayuga Lake will go head-to-head in a bracket-style event that will pay $50,000 to the winner. The top finisher in the bracket event will also earn a guaranteed spot in the 2017 GEICO Bassmaster Classic.

Alabama angler Gerald Swindle finished 10th, missing the cut for the bracket event, but he maintained his lead in the Toyota Bassmaster Angler of the Year standings with a season points total of 643. Combs is second with 602.

Swindle was awarded $1,000 for the leading the Toyota Bassmaster Angler of the Year points race at the end of the event.

VanDam earned the Power-Pole Captain’s Cash award of $1,000 for being the highest-placing angler who is registered and eligible and uses a client-approved product on his boat.

Lee earned the Livingston Lures Leader Award of $500 for leading on the second day.

The Phoenix Boats Big Bass Award of $1,500 was presented to Morizo Shimizu for weighing in the overall biggest bass of the event — a 6-3 bass caught on Thursday.