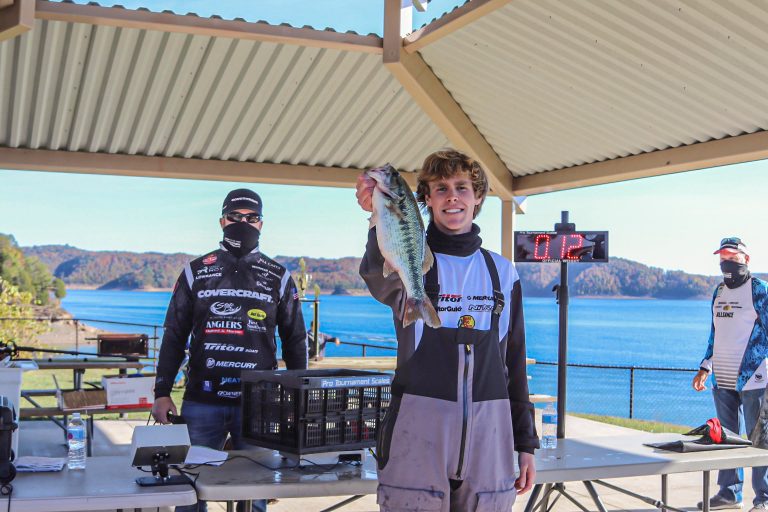 The 2020 version of the Bradley Roy High School Open presented by Covercraft was the most exciting in its eight-year history.

The tournament is an officially-sanctioned high school event by the Kentucky Bass Nation.  Two spots in the 2021 Bassmaster High School National Championship were awarded to Saturday’s top finishers: Connor Baker and Evan Morris of Larue Country, and Hunter Shelton and Jordan Hampton of Trigg County.

The winners weighed a bag of five fish (two largemouth and three spotted bass) totaling 9.98 pounds, which included the big fish of the event, a 4.97 largemouth. The runners-up weighed in 9.85.

The winning team of Baker and Morris, captained by Campbellsville University bass team member Wyatt Pearman, also displayed outstanding sportsmanship on Saturday. John Harris of Danville, Kentucky, was fishing in a local tournament and experienced mechanic troubles. The eventual winning team towed Harris’ boat back to the ramp where his event had launched. The day had already been shortened by a fog delay that morning.

“It was a blessing to see three young men show such unselfish, Christian attitudes,” said Morris. “To be willing to give up 30 to 45 minutes of their tournament day was just outstanding. They had a long run back to the check-in, too.”

The Kentucky Department of Fish and Wildlife Resources provided a release truck for the event again this year.

Following the weigh-in, Roy gathered the top five teams and immediately cut off any information gathering from other teams about any surrounding lakes or Lake Cumberland.  He then prepared all teams for a fish-off on Sunday at a mystery lake to be disclosed early Sunday morning.

The five remaining teams were housed at the Lake Cumberland State Park Lodge and geared up for a Major League Fishing Cup-style tournament the next day. The Bass Pro Tour angler convened the group in the parking lot at 4:30 CDT on Sunday morning and informed the group of their destination â€“ Cedar Creek Lake in Stanford, Kentucky.

“I asked the teams if any of them had experience on Cedar Creek, and only one of the five teams had ever been there before,” said Roy. “That is great because it was truly a ‘show up and fish’ experience just like in the Major League Fishing Cups.”

The convoy made their way 77 miles up to Cedar Creek and prepared for “lines in” at 8:15 EDT. Each team was assigned boat officials trained by Roy and provided two sets of MLF-supplied scales. Teams were given thirty minutes to ride around on the 950-acre lake.

Roy streamed commentary on his social media pages as he covered the action. The teams fished two 2.5-hour sessions, with a thirty-minute break in between.

True to MLF form, the winner was decided in the final minutes of action.  After all five boat officials had reported in, the team of Connor Baker and Evan Morris were crowned the champions on the water.  The Larue County team landed a 3-12 largemouth in the waning moments to jump over the Louisa Bass Fishing Team of Jake Lycans and William Copley for the victory.

“This event will be memorable for many reasons; the turnout in a weird year, the quality of anglers in Kentucky high school fishing, and the opportunity to go to Cedar Creek for Sunday. The one aspect that stands out the most for me this year is the college scholarships.  Winning these college scholarships is a life-changing event for these anglers.  The investment these schools and sponsors made in providing scholarships for these top teams is a big deal. I am so excited to look back in a few years and see how it helped these student anglers,” said Roy.

Covercraft contributed to the scholarship fund and provided protective face coverings for all anglers, coaches, volunteers, and family members.

“2020 has been a strange year, but we are so thankful that these student anglers were able to experience this event and have the opportunity to go to college through their hard work on the water. We are proud to support high school fishing and this great event,” said Jeff Jegelewicz, Director of Marketing at Covercraft.

“We were thrilled to be able to host this event again and allow these students to compete.  We are proud of our lake here and how ‘large’ it fishes for tournaments of this magnitude.  We’re also excited to announce the 9th Annual Bradley Roy High School Open presented by Covercraft will again be hosted here by the city of Jamestown, Kentucky, with the date to be determined,” said Nick Shearer, Russell County Chamber of Commerce, and the Mayor of Jamestown.