Bass fishing changes and improves from equipment to techniques every year. But we often give bass too much credit for needing new presentations to get them to bite. Sometimes reverting to forgotten techniques produces needed bites on a tough day. The often overlooked split-shot rig catches bass as good today as it did three decades ago.

“A lot of fishermen don’t ever think to throw a split-shot rigged plastic anymore,” said Elite Series pro Terry Scroggins. “If other anglers aren’t fishing with it, however, then it just makes it better for guys like me who still use it.”

As simple as it sounds, a split-shot rig consists of three items: a hook, a small split-shot sinker, and a soft plastic bait of your choosing. Texas rig your favorite plastic on the hook and pinch a small split shot however far above the bait you want. That’s it.

What’s nice is it can be a finesse Texas Rig, a shaky head or a finesse Carolina rig all in one.

“The lightweight sinker and a small soft plastic make the bait just glide through the water,” said Scroggins. “People don’t realize that, but it’s all about the fall of the bait. A lot of guys stopped throwing it with the introduction of the drop shot, so bass don’t see it too much anymore.”

Scroggins fishes a split-shot much like you would fish a weightless worm, or a wacky-worm presentation. He simply casts the lure to a piece of cover, let’s the bait sink to the bottom and if nothing bites, he reels up and goes on to the next target.

“You can hop the bait one or two times on the bottom if you need to, but the action is all in the fall,” assured Scroggins. “If the bass don’t hit it on the way down, then you aren’t likely to do any good trying to give the bait more action. The only time of the year I’ll really work the set-up is during the spawn. That time of year, I will drag a split-shot back to the boat more like a Carolina rig.”

The split-shot really shines over other presentations during post-frontal conditions, or on heavily pressured bass. When the fish don’t seem to want to eat anything else, a split-shot can oftentimes make them bite. 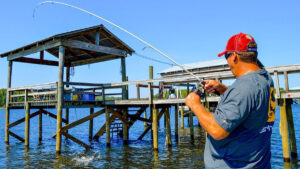 “Anywhere the water is 6 feet or less,” Scroggins said. “I’ve thrown this set-up in so many situations, it is hard to narrow it down to a quick answer.”

After a few minutes to ponder and with fall bass fishing in mind, Scroggins was able to come up with a few specific scenarios when the split-shot rig shines.

Docks are perhaps Scroggins favorite places to throw a split-shot rig. Especially in the fall months, as bass flood the shallows while many lakes water levels are drawn-down to winter level. Scroggins knows bass will gang up on these pieces of structure and a split-shot gives them something they haven’t seen before.

“You can skip the split-shot rig way up under those docks, and the way the bait glides  drives bass crazy,” he said. “Keep your Power Poles down when you do this, too. Cause a lot of time in the fall if there is one bass, there is more.”

Isolated pieces of wood, whether it’s a cypress tree, a stump, a bush or laydown, are all prime areas to utilize the split-shot rig. Countless anglers target these structures with a jig, Texas-rig, or other power fishing techniques, but few bass have seen a split-shot rig.

More than simply using this set-up to skip in and around hard targets, Big Show will use the uniqueness of this bait’s fall to his advantage in and around grass.

“If I’ve got a situation where I know there are still some fish using a grass line but they won’t bite bigger baits, I’ll downsize to a split-shot,” said Scroggins. “The big thing these days are to use heavy punching weights, or a big jigs, around grass. If I know a lot of guys are catching them that way, I’ll go right behind them with a split shot and pick up some of the fish they’re missing.” 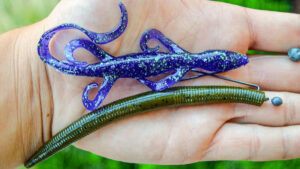 Arguably the most important part of your split-shot rig is choosing the proper bait profile. Since the entire set-up itself is so light and simple, the soft plastic you thread on your hook becomes extremely important.

Most soft plastics will work on a split-shot but Scroggins most fruitful baits include the YUM Mightee Worm, a YUM Lizard and a YUM Dinger.

“Split-shot rigging a YUM Dinger can be a really effective presentation, “ said Scroggins. “A Dinger has a great shimmying action when you throw it weightless. When you add a split-shot weight, the bait will glide and shimmy its way through the water column. If you see it in the water, you would swear the bait is swimming, and bass think the same thing.”

Scroggins tries not to make things too complicated when it comes time for color selection for his YUM soft plastics.

“I pretty much stick to three colors on soft plastics no matter the application,” said Scroggins. “I’ll throw green pumpkin if the water is clear, Junebug if the water is tannic like what we get in Florida, and black and blue if the water has a lot of color to it.”

While Scroggins admits there is really no need to overthink the gear for a split-shot set-up, he is very particular about the specifics he uses for this technique.

With the split-shot rig being such a lightweight set-up, Scroggins favors a Lew’s Tournament Pro Spin spinning reel in the 300 size.

He pairs that with his Signature Series Duckett White Ice Scroggins Spinning Rod. Which is a 6-foot, 8-inch rod with a medium-heavy action.

“I love that rod for something like split-shotting because it is long enough to give me the casting distance I am looking for,” said Scroggins. “But it’s still short enough I can stay extremely accurate with my casts. Which is even more important for something as small as a split-shot.”

Scroggins opts for a smaller 3/0 straight-shank Gamakatsu worm hook when rigging the smaller baits he often throws with a split-shot rig.  The “Big Show” uses small line with technique since he is often targeting pressured and finicky bass. Scroggins uses 10-pound Hi-Seas braided line as his main line, and 8 to 10-pound Hi-Seas fluorocarbon as his leader line.

While any split shot weight will work, Scroggins has a favorite.

“I use a Bass Pro Shops XPS Clam Shot Weight in the No. 8 size,” explained Scroggins. “The shape of that weight seems to skip a little better and come through cover easier. Those weights adjust easily on your line, which helps with abrasions. You’re already using light line, so you don’t want to nick it or scrape it.”

The myriad of new, flashy baits out on the market definitely merit practice and investigation, but don’t forget about the tried and true lures or techniques of the past. Rigs like the split-shot rig are “old standbys” because they have caught and still catch fish