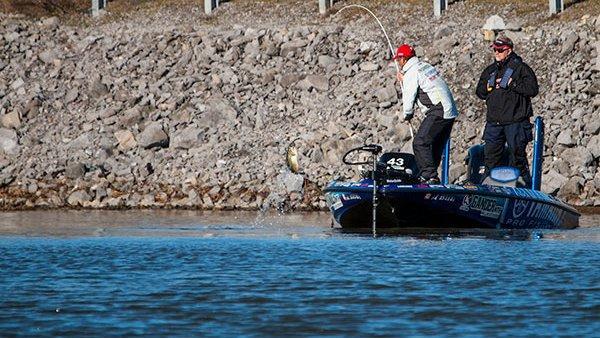 Early prespawn bass fishing gives anglers an excellent opportunity to catch monster bass. As the bass emerge from their deep, wintertime haunts in preparation for the spawn, they are notoriously indiscriminate when it comes to their feeding behavior. The result is simple—giant bass and lots of them.

Elite Series pro Dean Rojas is one of the best at dissecting early prespawn patterns. As the days start getting longer, he primarily relies on five types of areas for his kicker fish.

Although early prespawn bass can be quite predictable, it’s important to understand they’re like people in a sense—each one exhibits unique behavior.  For this reason, Rojas is a staunch believer in the process of elimination throughout this time of year. Keeping the bass “honest” plays a big role in his strategy.

“Whenever you approach the beginning stages of the prespawn, I suggest going through a thorough process of elimination,” Rojas said. “While some folks like to start deep and work their way shallow, I’m actually the polar opposite. I always target the backs of creeks and short pockets before I do anything else.”

The reason for Rojas’ plan is twofold. As one of the best shallow anglers in the world, he feels most confident fishing for bass in dirt-shallow water. More importantly, however, he believes shallow water plays host to more bass than you might think.

“It doesn’t matter where you go—there are always going to be bass in shallow water,” Rojas said. “Will they be the ones to win a tournament? That really depends on the fishery, but shallow areas give me a complete overview of the water temperature which is a huge deal in the early prespawn. It’s not uncommon to find places with nearby springs that will result in a five-degree water temperature increase. If you wait to go back there, you’ll never know and you might miss out on an incredible shallow bite.”

Every bass angler is guilty of it. After months of ridiculously frigid water temperatures, we become glued to our electronics, searching for the warmest water possible. This obsessive behavior isn’t necessarily a bad thing, but make sure to keep an open mind towards other important factors as well.

“In my opinion, I think 50 degrees is the magic number for early prespawn movement,” Rojas said. “At that point, they’re ready to move and make something happen. But there’s something much more important than water temperature. Their clock heavily correlates with the length of days and it’s an easy thing to overlook. You can have a brutal cold front come in and they’ll still be steadily moving up if the days are getting longer.”

If you’ve been around bass fishing for a while, there’s a great chance you’ve heard enough information about moon phase to make your head spin. Some folks give it a lot of credence while others, such as Rojas, don’t get too carried away with it.

“I don’t believe moon phase matters as much as people think,” Rojas said. “When I broke the weight record in Florida, we didn’t have a full moon—we actually had no moon. Regardless, we had the biggest influx of shallow bass I’ve ever seen. One warming trend is all it takes to turn it on fire.”

It never fails—just when you think you’re on a mega-bag of early prespawn bass, Mother Nature throws a wicked curveball and totally jacks up your plans. With a basic understanding of weather fronts and how they affect these early season fish, however, you’ll have a major advantage over the bass.

Now that you have a basic understanding of the various factors that influence the behavior of early prespawn bass, you’re ready to start catching. According to Rojas, it’s hard to beat these five areas.

A large part of fooling the year’s first wave of shallow bass revolves around locating congregation places, or funnels. These are areas such as bridge corners and riprap separating the main lake from backwater ponds. In order for the bass to migrate toward shallow water, they have no other choice than to swim through these areas.
“Funnels are outstanding ambush points for big bass,” Rojas said. “They don’t have to move very far to fatten up because the current—even if it’s just wind-generated—will push small forage right by their faces. Culverts and bridges are great places to focus on because they separate the bass from where they will eventually need to go. I caught a lot of great bass throughout the 2014 Classic doing this and that’s eventually how Randy Howell earned his victory.”

Certain kinds of bass fishing structure can be very seasonal but that’s certainly not the case with primary points. These are shallow areas that jut into deeper main lake water and provide bass with two very important things—quick access to deep water and abundant feeding opportunities. This is why they’re so productive throughout the entire year.

“Bass use these points regardless of the conditions or time of year, so you can never go wrong with primary points,” Rojas said. “Points can be anything and they’re relative to each body of water. In a shallow fishery such as Okeechobee, they can be a one-foot drop while on deeper lakes such as Table Rock, they can be 30-foot drops. For early prespawners, they act as a natural stopping point throughout their shallow water migration. They come out of the river and creek channels and hang out on these points to feed.”

As coldwater bass slowly make their way shallow in the earliest parts of spring, make sure to spend some time targeting secondary points, or smaller points within a creek. Remember, each fish is different—some just want to get the spawn done and over with while others take their sweet time. For those lackadaisical bass, secondary points are prime places to congregate.

“Secondary points are actually awesome areas for cold fronts in the early prespawn,” Rojas said. “That first wave of fish that tries to move shallow early in the year is very susceptible to cold fronts. When a front hits a lake, these bass will slide back to nearby secondary points and become absolutely stacked.”

Fishing main lake flats this time of year can be really incredible or really bad—there’s not much in-between. Due to their potential, however, they’re always worth checking.

“Ideally, you want to concentrate on the ditches that lead into the flats,” Rojas said. “Make sure you focus your efforts on the first drop from the flat or in the ditches. These depressions are easy travel routes for bass and when a cold front hits like they tend to do this time of year, bass will slide back and hang out in these ditches until the weather passes. I spend a lot of time studying my Lowrance in order to find even the smallest depressions and irregularities.”

The productivity of backwater ponds is well-documented, but rarely do you hear them come into conversation in just the first week of March. The lack of discussion actually makes them even better because if you find a solid group of fish in this type of area, you’re likely to have it all to yourself.

“If you can locate a backwater pond with stable water, there is no reason to leave,” Rojas said. “I know it’s weird to hear that so early in the year, but you have to think—you’ll always have fish coming to you. The shallow water warms up quickly, the days are getting longer and the bass are heading your way. They know where the warmer water is, so don’t rule these areas out in the early parts of the prespawn.”

Sure—it might sound crazy to be discussing prespawn bass so early in the year, but small warming trends and stable water can make things happen overnight and it’s important to be prepared. If you can implement a process of elimination, understand what makes the bass migrate, adjust to weather fronts and target high percentage areas, you’ll be able to catch some monster prespawn bass before anyone else gets the memo.