Fall fishing doesn’t always need to be synonymous with hard reaction baits. When the bass are lethargic and not feeding aggressively, bass fishing with soft plastics is an excellent way to overcome tough conditions.

FLW Tour pro and former Bassmaster Classic champion Jay Yelas pitches and flips soft plastics quite often throughout the autumn months. According to him, you can go to any lake in the country and catch big bass on the following soft plastic baits.

Most anglers are familiar with soft plastic creature baits, but it’s tempting to overlook them in favor of reaction baits in the fall. If you’re in an area thick with baitfish and faster presentations aren’t producing, Yelas suggests utilizing a slower approach with a creature bait.

“I’ve done really well pitching the 4.5-inch Yamamoto Flappin’ Hog on a Texas rig around docks in the fall,” Yelas said. “It’s probably my first choice throughout the fall months. If I know the bass are still shallow but they’re not biting my crankbait or topwater lure, I’ll back off the bank a bit and flip this bait to deeper wood cover in the 10-foot depth range.

Great jig alternative:”Jigs are well known for being big bass producers in the fall, but there are many times when they don’t want such a bulky profile,” Yelas said. “The Flappin’ Hog is a great alternative to a jig because it displaces water without being too intrusive. If they still won’t eat it, I’ll pinch an inch off of the bait to streamline its presentation.”Get better hookups:”I’m not a big fan of straight shank flipping hooks,” Yelas said. “The bait will slide down the shank when you’re flipping in heavy cover, so I use a 5/0 offset shank EWG-style hook to fish more efficiently. I also feel like these hooks also give me a better hookup percentage.

Ditch the toothpicks: Instead of using toothpicks to peg your Texas rig weights, try using bobber stops. They won’t fray your line and they’ll stay intact throughout an entire fishing day.

Know when to peg your weight:”If I’m fishing a Texas rigged creature bait in heavy cover, I like to peg my weight with a small RockyBrook Sinkers Bobber Stop,” Yelas said. “If your bait snags on a limb, an unpegged weight will down your slack line past the bait and cause a lot of hang-ups that will ruin an otherwise productive piece of cover.” 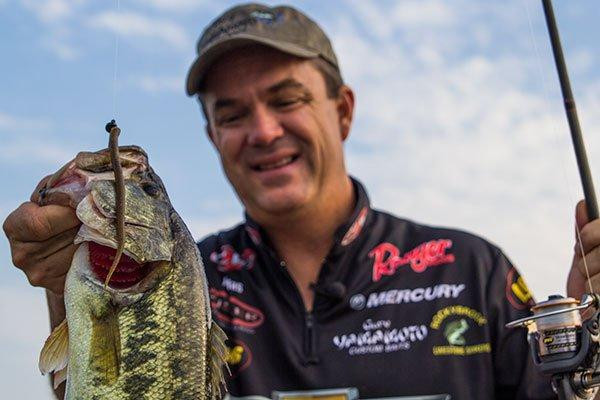 When conditions are especially tough and bites are few and far between, Yelas turns to a straight tail worm for the majority of his fall fishing. This worm style appeals to pressured bass and offers anglers a lot of versatility

“It’s really difficult to beat the Yamamoto Pro Senko in super-tough conditions in the fall,” Yelas said. “The possibilities are endlessâ€”you can use it on a shaky head, a drop shot or even a neko rig.”

“Worms will always catch fish,” Yelas said. “You cannot and will not replace them. They have to be in your arsenal, whether you’re a beginner or a seasoned professional. They might have a reputation for catching small bass, but you can definitely catch some great big ones on them.”

Shaky head: ”A straight tail worm on a 1/8-ounce RockyBrook Sinkers Shaky Head is an excellent rig for catching pressured bass in the fall,” Yelas said. “It works great on shallow rocky points, rip rap and even in depths exceeding 25 feet. I really like to target the ends of old laydowns with this rig in the 12 to 15-foot range and fish them very slowly. Fall bass have been pressured all year, so it’s important to use 8 or 10-pound Maxima Fluorocarbon Line to make sure you don’t spook them. .”

Drop shot: ”Drop shotting a straight tail worm is a great open water technique throughout the fall,” Yelas said. “Whenever I find baitfish on my Humminbird in 20 to 40 feet of water, I’ll pull out a drop shot and start working on them. A 3/8 or 1/2-ounce RockyBrook Sinkers Drop Shot Weight will work in almost every condition while giving you a great feel of the bottom composition.”

Neko rig: ”A neko rig is great for open water when a drop shot isn’t working,” Yelas said. “Bass rarely see this presentation, so it can do a lot of damage on pressured fish. I’ve found it to be most effective in the 20 to 30-foot depth range in the fall.”

It’s not uncommon to see anglers using cut tail worms in the warmer months, but Yelas believes they’re very overlooked as the water begins to cool. The unique design allows him to dissect both shallow and deep cover.

“A Yamamoto Kut Tail Worm is extremely productive throughout the fall,” Yelas said. “A lot of folks like to use them around grass beds in warmer weather, but that’s not really a factor in the fall. Most of the vegetation is dying right now, so I’ll target wood cover with them instead.”

Texas rig: ”I really like to fish a Kut Tail Worm on a Texas rig when I’m targeting depths less than 15 feet,” Yelas said. “If there is bait nearby but the bass are being stubborn, it’s a great way to fool them. Spend some time idling to find deeper brush piles and drag it through them with a pegged weight.”

Carolina rig: ”Don’t forget about the Carolina rig in the fall,” Yelas said. “Not all shad move to the shallows, so there will always be some big bass hanging out around the ends of points. Big bass are pretty smart and not many anglers throw a Carolina rig anymore, making it a very productive big fish technique.”

Clear water: “If you’re in clear water, don’t be afraid to break out a spinning rod. A 1/4 or 3/8-ounce weight and a 3 1/2-foot leader will help you avoid spooking cold water bass. It may seem a little weird using spinning gear for this, but it can be very effective.

Stained water: ”In stained water, you can get away with a 1/2 or 3/4-ounce weight. This will help you keep contact with the bottom and increase your sensitivity. You can also use a shorter leader in this situation, so try starting with a 2 1/2-foot leader and work your way down from there.

If you’re not having any luck with reaction baits this fall, don’t try to force-feed them to the bass. Instead, fish the same areas with soft plastic baits. If you can find bait and present the bait slowly, you’ll have a great chance of catching some big ones.

What other kinds of soft plastic shapes work for you in the fall? How do you fish them?