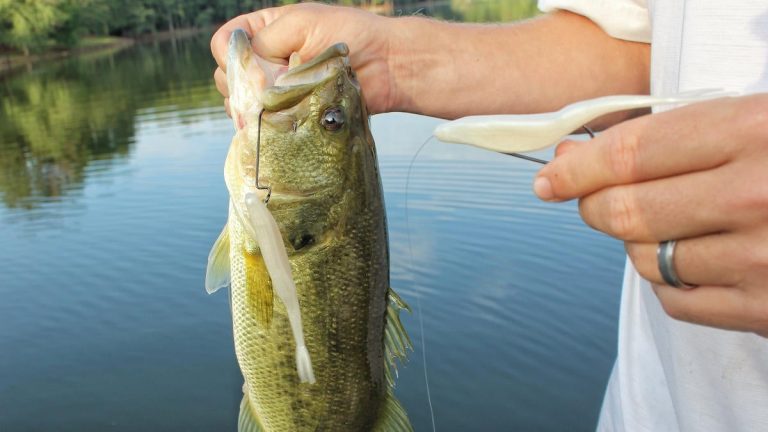 Whether you’ve been bass fishing for decades or you’re brand new to the sport, the Zoom Super Fluke is a bait for all ages and expertise levels. It’s a bait used by both professional fishermen in pursuit of millions of dollars and pond hoppers just looking for a bite.

The Fluke’s design makes it extremely effective while its simplicity makes it very versatile. To expound upon the versatility of the Zoom Super Fluke, here are five ways to rig it. 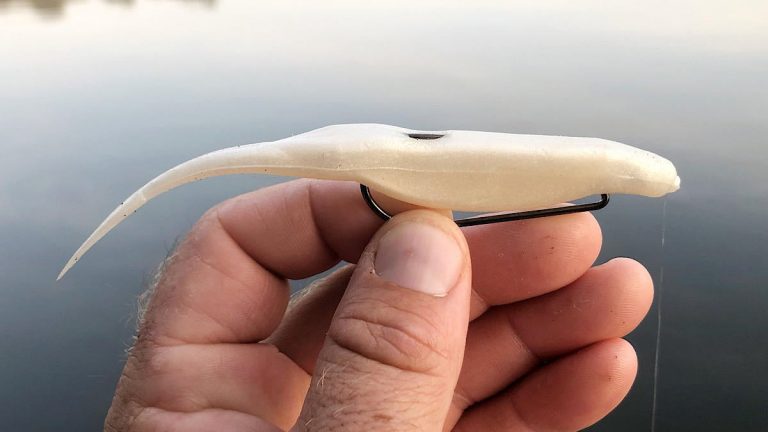 This rig works well with traditional worm hooks, extra wide gap (EWG) style hooks as well as straight shank hooks. With a straight shank hook, you will leave the hook point just below the surface of the bait’s back. With EWG and worm hooks you’ll want to run it all the way through and then skin hook the bait so the point isn’t exposed, thus making the bait weedless.

The bait is rigged weightless so that it can be fished along the surface which allows it to perfectly mimic a helpless or fleeing baitfish. It works really well with a fast twitch or a slower, wide swiping, side-to-side cadence. Allowing the bait to sink a foot or two is also really effective when the fish are reluctant to break the surface on a topwater bait.

If one Fluke is good, two Flukes are great, right? Schooling fish can be quite challenging to catch. There’s often a plethora of the real deal around so the bass have a lot to choose from and compare your offering to. If you’re having a hard time drawing a fish’s attention with one Fluke, adding a second will often do the trick.

This can be done with a three-way swivel, though that presents issues that an alternate way of rigging will solve. With the three-way swivel, you tie your mainline to one ring on the swivel and then two leaders of varying lengths to the others, each with a fluke on the end. Inevitably however, this leads to some pretty nasty line twists and, because the baits are stuck at a fixed distance from one another, you create a situation where a fish will likely pull off in a scenario where two bass eat the baits.

Instead it’s better to take two regular swivels, tie a Fluke and leader to each with varying lengths and then slide the swivel of the shorter leader up your mainline before tying the other swivel to your main line. Now, if two fish eat the baits then the fish have some opportunity to pull the baits away from each other without gaining leverage to pull off. 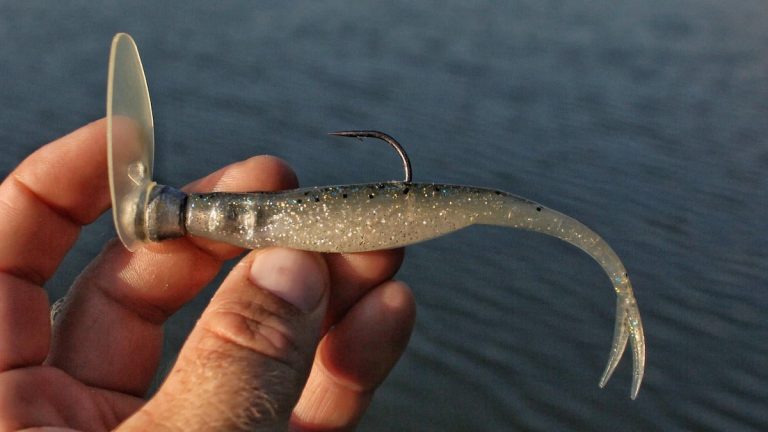 A scrounger is one of my favorite baits when building a category that best marries power fishing to finesse fishing. You have the subtleness of a Fluke paired with the aggressive vibration a ChatterBait all while giving yourself something different to target fish that would likely be accustomed to seeing lipless crankbaits, swimbaits and jerkbaits.

Rigging a scrounger is super easy, at first glance at least. Simply run a Fluke up onto the hook, right? Well yes, but… balance is extremely important when rigging and fishing a scrounger. If the Fluke is a little off center, it can cause the bait to swim to one side or even roll. The same will happen if the bill isn’t perfectly centered or if it’s bent. The fluke will also get pulled down on a scrounger. To prevent that, put a little glue on the shaft before sliding the bait up. And that’s not the only reason to keep super glue handy.

On most baits like this, the bills will rotate around the lead head. Adding a drop of super glue once you get the bill position dialed in will help it stay in place and, in the event it does move again, allow you to line the bill back up faster by bringing the two halves of the harden super glue back in line with one another. You can also take a marker and draw a small line from the bill to the lead head that you can line back up quickly if the bill moves. 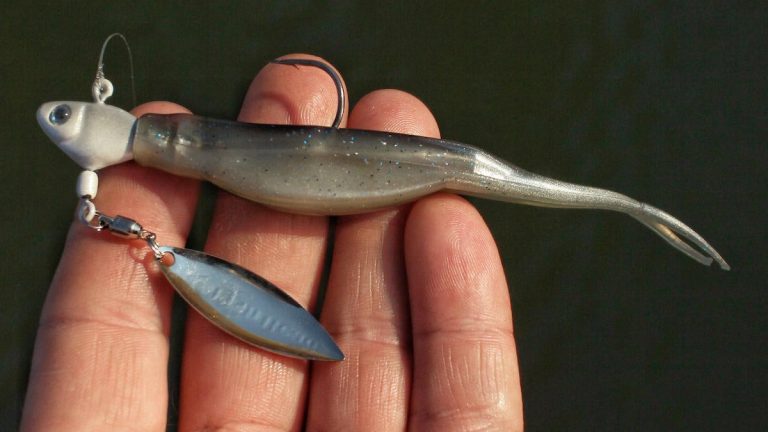 To me, an underspin is like a finessy scrounger and a scrounger is like a power-fishy underspin. I’ll typically use a scrounger in slightly shallower, dingier water around more cover and use an underspin in clearer, deeper, open water. They both fish well on a mostly steady retrieve, but the underspin definitely offers up more versatility in the ways and depths at which you can fish it.

Where most scroungers spiral on a free fall, the blade of an underspin tucks in tight and allows the bait to fall fast and almost perfectly vertical. This allows an angler to fish deeper more effectively with an underspin. Pausing the bait on the retrieve and letting it fall suddenly into the face of a trailing fish is also very effective. Yo-yoing the bait continuously on the retrieve is another a great way to trigger strikes and the bait can even be dropped vertically on a suspended bass like a spoon.

There are numerous brands and sizes of baits like this. The best ones have a strong but light-wire hook and an effective way to secure the soft plastic without tearing it. A touch of super glue will again add a little insurance in that department. Just slide the Fluke on and you’re ready to go. 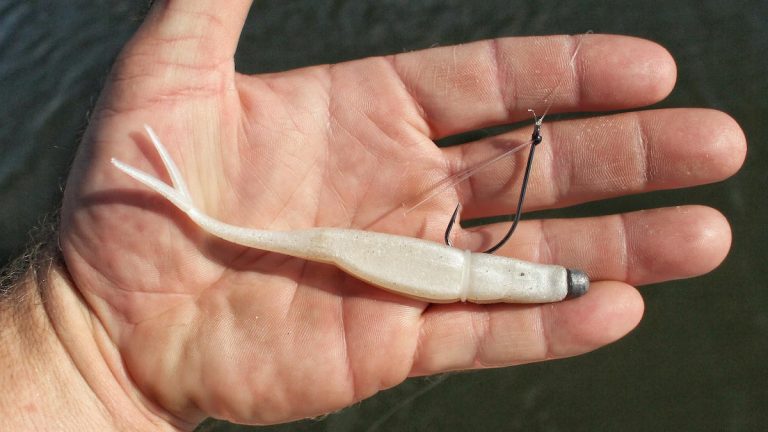 This a new way of rigging a Fluke for me that I’m not that experienced with but was quite intrigued by. I was recently introduced to this setup by Ben Adrien as he was using it to bat cleanup on a ledge. It’s again an effort to find the perfect middle ground between power and finesse while presenting a fish with something they’re not used to seeing.

A Fluke isn’t often found 15 feet deep, but the baitfish it’s made to imitate are certainly prevalent there. So Neko rigging a Fluke makes sense right away. By taking a nail weight and sliding it into the nose of the Fluke you ensure the bait will stay nose down and kick up a little mud on the bottom. Take a wacky tool and put an o-ring about a third of the way up from the nose of the bait and then skin hook the bait while running a whacky hook through the o-ring and there you have it. A Neko rig with a shad profile and something the fish aren’t used to seeing.

With a nice slow drag, the hook being positioned on the back of the bait will pull it forward while the weight in the Fluke’s nose keeps it down. Popping the bait will also create an enticing action as it imitates a dying baitfish struggling along the bottom.

Though we only outlined a handful of techniques here that a Fluke is perfect for, you can already see that it is extremely effective at catching bass from the surface to the bottom, in current and calm water and around schools of fish or suspended loaners. There likely isn’t a more diverse and effective bait and that’s why the Fluke has endeared itself to anglers for decades and instilled itself as a bass fishing staple forevermore.