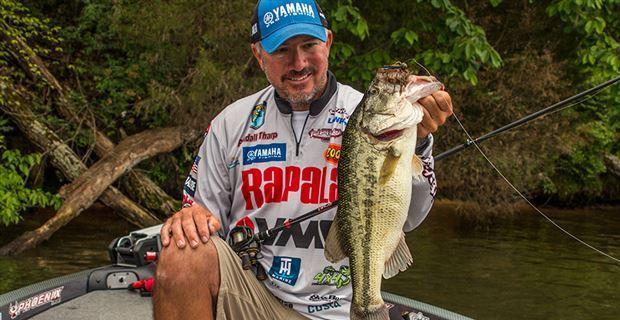 Flipping jigs do two very important things for bass anglers: They expertly mimic bluegill and crawfish—two favorite foods of big bass—and they displace a lot of water. Due to their big profiles, these jigs simply attract larger than average bass

Elite Series pro and renowned jig fishing expert Randall Tharp most often uses an old-school approach when he’s using flipping jigs. Instead of threading a crawfish-style trailer onto his jigs, he prefers using a chunk-style trailer for several reasons.

“When a bass flares its gills and sucks in the jig, that big chunk is the first thing that goes into its mouth, followed closely by the hook. Flipping is all about percentages and having a nose-hooked chunk on my jigs drastically increases my hookup ratio.”

In addition to its efficiency, Tharp is also a big believer in the action and rate-of-fall impact these chunk trailers provide.

“Your jig’s descent is incredibly important when you’re pitching and flipping,” Tharp said. “By nose-hooking a chunk, you’ll achieve a much more vertical fall. When it hits the bottom, the chunk’s ‘claws’ are thin and undulate with small rod movements or even very subtle current. I absolutely believe it gets more bites.” 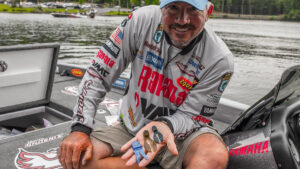 Tharp keeps it very simple throughout the year. He only uses three different chunks but keep in mind; the man has earned a small fortune using these combinations throughout his career.

Chunk No. 1: Zoom Big Salty Chunk
Targets: Boat docks and laydowns, especially in lakes with quality fish. Tharp also won over $100,000 this year on Bull Shoals Lake fishing this chunk on the back of his signature 4×4 flipping jig.
His advice: “It’s tied on all the time. It’s compact, yet bulky and there’s not another trailer than resembles it. It’s hard to find outside of the Southeast, but I’ve seen more money won on this trailer than any other. It’s terribly underutilized.”

Chunk No. 2: Zoom Super Chunk
Targets: Submerged vegetation (milfoil) and thicker hard cover.
His advice: “Larger and wider chunks will get snagged when you’re flipping deep grass. I’ve found that this particular chunk maintains that big visual profile, but it glides through the thick stuff a little easier.”

Chunk No. 3: Zoom Super Chunk Jr.
Targets: Boat docks, laydowns, stumps and grass lines.
His advice: “When I’m fishing a super tough lake and feel like bites are at a premium, I’ll downsize just so I can get some fish in the boat. You’ll still get the action and movement, but it’s not as overwhelming to the bass.”