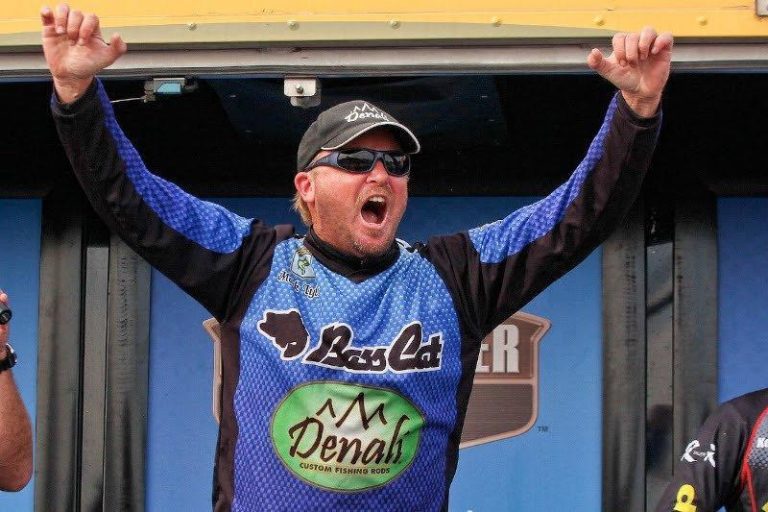 Former Bassmaster Elite Series pro Mark Tyler cashed in his home water advantage to win the Bass Pro Shops Central Open presented by Allstate finale on the Arkansas River.  The Vian, Okla., angler hadn’t fished the river since last year’s Open at Muskogee, so he relied on five previous years of experience to catch the winning weight of 42 pounds, 14 ounces and took home a $40,000 Skeeter ZX200/Yamaha VF200LA rig and $6,101 in cash. Cattle ranching kept Tyler too busy to fish the river this year, but he estimated in the previous five years he spent about 100 days a year fishing the river.  â€œIt was simple river fishing,â€ Tyler said of his winning pattern. â€œI just fished pretty much laydowns, little weed points and shallow-water cover â€” just like you would expect in a river system. The difference was I ran a bunch of spots that I have a lot of confidence in. From years of experience I knew a piece of wood I pulled up on would be a key piece.â€  The local angler tried to stay on high percentage spots each day. â€œThere really wasn’t anything complicated to my pattern because everybody was throwing at some kind of wood or shallow-water cover.â€ The first two days he caught all of his fish on a variety of soft plastics, such as plastic craws and worms. Today he caught all of his fish on a square-bill crankbait.  Finishing second on the pro side with 41 pounds, 3 ounces was Kenta Kimura of Livingston, Texas. He keyed on isolated logs each day and flipped either a Texas rigged Berkley Chigger Quad or a hand-tied jig with a Berkley Chigger Quad. Kimura also caught some keepers today on a Deps Evok square-bill crankbait. The rest of the Top 5 pro anglers were Tommy Biffle, Wagoner, Okla., third, 40-9; Jordan Lee, Vinemont, Ala., fourth, 39-7; and Brian Potter, Claremore, Okla., fifth with 37-12.  Afton, Okla., angler Toby Hartsell won the co-angler division and earned the top prize of a Nitro Z-7 bass boat and Mercury 150 Pro XS outboard worth $25,000. He caught nine bass weighing 27-6 while flipping soft plastics and jigs to shallow cover.  The Carhartt Big Bass of the tournament award of $500 was presented to Arkansas angler Skip Ibbotson, who caught a 5-13 largemouth.  Tyler received the Livingston Lures Leader Award of $250 for finishing as the top pro on Day 2. Finishing as the Day 2 leader on the co-angler side, Hartsell received a Livingston Lures gift pack worth $250.  The Allstate Good Hands, Great Day award was given to anglers in both divisions who advanced the most places up the leaderboard from Day 1 to Day 2. Pro division angler Matt Lee of Auburn, Ala., collected $250 by jumping 57 places from 118th to 61st. Co-angler Dustin Wrona of Tulsa, Okla., picked up $150 by climbing 76 places from 107th to 31st.  Bassmaster Elite Series pro Stephen Browning clinched the Central Opens points title with 584 points. The rest of the anglers who qualified for an invitation to the Elites are Jordan Lee, who finished second with 555, followed by Carl Jocumsen (the first Australian angler to qualify for the Elites), 544; Brian Clark, fourth, 536; Randy Allen, fifth, 530; and Ken Iyobe, sixth, 528.    â€œMaking the Elites is something I have always dreamed about since I was in eighth or ninth grade watching  The Bassmasters,â€ said Lee, a former Carhartt Bassmaster College Series champion. â€œThis is what I have always wanted to do. This is the first year I fished the Opens, and I fished all nine to try and reach the Elites.â€  Lee also won the $1,500 Toyota Bonus Bucks award as the highest placing eligible Toyota pro angler entrant at the last Central Open.