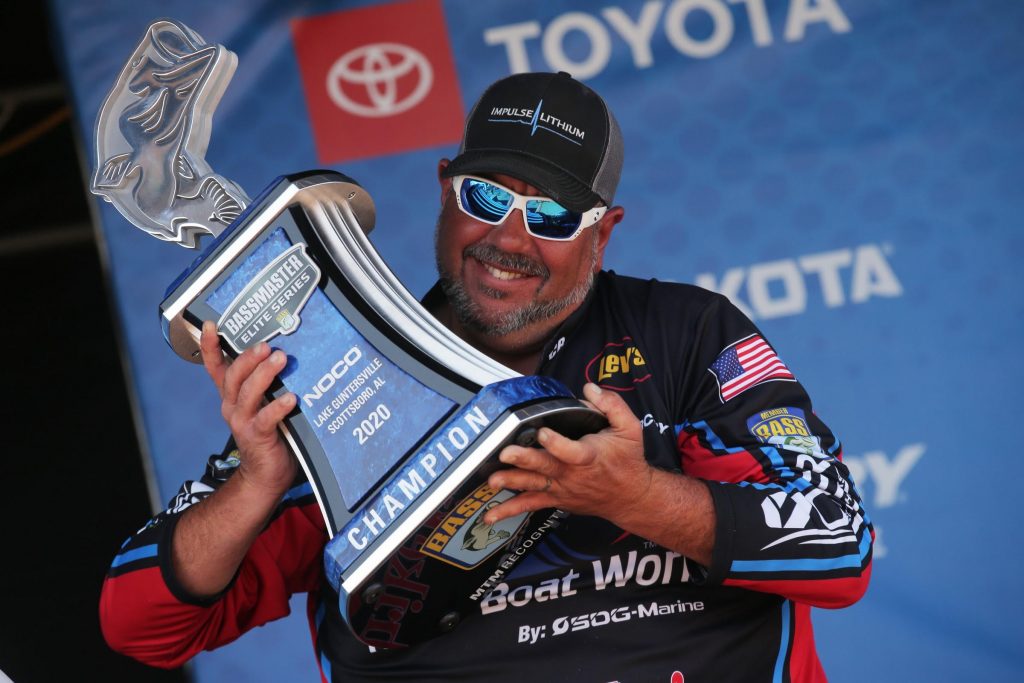 But with three small children at home, he kept that dream in his back pocket for two decades in favor of coaching youth sports teams, fishing local tournaments and just being a good husband and dad.

Saturday, at age 45, the second-year Elite Series pro affectionately known as “Frank the Tank” saw his dream come true, weighing in 18 pounds, 2 ounces of bass during the final round to win the NOCO Bassmaster Elite at Lake Guntersville with a four-day total of 64-3.

Talley earned $100,000 and the cheers and tears of his family, who drove 14 hours through the night Friday from their home in Temple, Texas, to be there for his big moment.

“I was perfectly fine with just raising my kids â€” that’s why we had kids,” Talley said. “Finally, when my youngest boy got into high school, my kids and my wife kind of had an intervention. That sat me down and said, ‘You’re gonna go do this.’

“That’s what helped me understand it was OK to finally go and chase this dream â€” and they’re the reason I’m standing here with this trophy now.”

Good fishing instincts also played a role in Talley’s success, especially with a key decision he made before his first cast Saturday morning.

Beginning the final round in sixth place with 46-1, Talley intended to make the same run upriver from the launch site at Goose Pond Colony that he’s been making all week. But he said a “gut feeling” caused him to stop on a small stretch of eelgrass before he reached his trusty spot â€” and the almost-immediate payoff was a 5-pound largemouth that put him in the lead to stay.

“It just looked right,” Talley said of the spot he started on Saturday. “On the first cast, I caught a 10-incher. Then about six casts later, I caught that 5-pounder. I boat-flipped that fish â€” I didn’t realize it was that big.

“I fished the entire length of that bank and ended up catching a limit there, which included the second big fish I caught, about a 4-pounder.”

Talley did most of his damage on that early-morning stretch with the same lure he’s been using during the early morning hours all week â€” a 1/2-ounce Strike King Thunder Cricket in green pumpkin. His trailer for most of the week was a Strike King Rage Swimmerin pumpkin with a pearl belly. But when he ran out of those, he switched to a Strike King Blade Minnow in green pumpkin with the tail tinted chartreuse with Spike-It dye.

He said the bait accounted for 95% of his weight this week.

“I’ve made most of the money I’ve made this year with that Thunder Cricket,” said Talley, who has now made five straight Top 40 cuts on the Elite Series. “Long ago, I was a West Coast guy and I know how to do all of the deep-water drop-shot fishing and all of that. But that’s how I like to fish.

“I like to be up around shallow cover, and that Thunder Cricket gets the job done up there.”

Talley fished the bait on a 7-foot, 3-inch Lew’s Magnum Hammer Rod with a medium-heavy action and a Lew’s Custom Pro 6.8:1 reel spooled with 17-pound Strike King Tour Grade fluorocarbon. He said the reel was “not too fast, not too slow,” which makes it perfect for the motion of the vibrating jig.

When the fishing slowed on the Thunder Cricket â€” and he wanted a change of pace that might produce a bigger bite â€” he switched to a white Strike King Sexy Frog that he modified with a plopper-style tail to help it cause more commotion on the water’s surface.

Talley fished the frog on a 7-2 Lew’s rod and a Lew’s Pro-Ti baitcasting reel spooled with 50-pound Strike King Braid.

“I ended up catching several big ones on that frog this week,” he said. “It was the perfect change-of-pace bait when I wanted to go looking for one good fish.”

Talley’s Saturday catch of 18-2 was his best of a week that included limits of 14-3 Wednesday, 16-5 Thursday and 15-9 Friday. Unlike many of the pros who felt like Guntersville was fishing a little tired after a week of pressure, Talley said he thought things were just starting to get right.

“I was just fishing eelgrass walls, and there was no rhyme or reason for why they were on one and not the other,” Talley said. “It could have been bait, could have been current.

“But whatever it is, they’re chomping now. I think they’re finally getting adjusted to this weather, and it’s about to be really, really good.”

The win moved Talley into 26th place in the Bassmaster Angler of the Year standings, putting him in good position to reach the 2021 Bassmaster Classic. His fellow Texan Clark Wendlandt took the AOY lead with 503 points, followed by Japanese rookie Taku Ito (478) and Minnesota veteran Seth Feider (466).

Another Texas pro, Chris Zaldain of Fort Worth, earned $1,500 for catching the Phoenix Boats Big Bass of the week â€” an 8-6 largemouth he landed on Day 1.