Drawing upon decades of Japanese design evolution and expertise, the long-awaited Destroyer ® begins its journey anew in the United States.

First released in Japan in 1996, the Destroyer ® rod series ushered in an era of unrivaled performance, innovation, and craftsmanship that reverberated throughout the angling world. Built to Japanese specifications, each generation of Destroyer ® represented an evolution in Megabass ® rod design, allowing Japanese anglers to realize ever-greater potential with every cast.

“Harnessing this design evolution and ethos, we are proud to present the all-new Destroyer ®, crafted exclusively for North American anglers,” said Yuskei Murayama, President of Megabass of America, Inc. “Initially limited to eight models, each rod represents a careful refinement of key American techniques, tirelessly honed by the insight our designers have gained though thirty-years of innovation across virtually every product category.”

Each un-sanded blank features the original Destroyer ® logo as a nod to its predecessors, and is constructed of a proprietary Hybrid Graphite System for a silky smoothâ€”yet powerfulâ€”action. Multi-axis build increases torsional rigidity, hoop strength, and potential energy, resulting in a blank coiled to unleash bombing casts and devastating hooksets, while revealing a surprisingly deep wellspring of power to control the fight.

“When your rod designers work alongside the very creators of the jerkbaits, swimbaits, jigs, etc. that each rod is developed for, something truly special happens,” said Kenichi Iida, Sales & Product Manager of Megabass of America, Inc. “By drawing on this expertise, we were able to fine-tune our rod actions to truly maximize the potential of each lure and technique.” 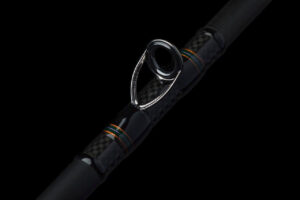 Armed with the best available materials and components, patented advancements, proprietary blank builds and tapers, and that impeccable fit and finish anglers have come to expect from Megabass, these first eight models represent the opening salvo in North America’s own Destroyer ® journey. Choose your weapons wisely.

Shortened rear grip further improves rod cadence ergonomics, for truly unrivaled precision and performance. Not limited to jerkbaits, the Oneten Special is also well-suited for those top water applications that rely on cadence and angler input to impart lure action.

The Destroyer ® Daemos inherits its core DNA from the Destroyer Racing Condition and Orochi XX Diablo Spec-R, building upon this heritage to take single hook applications to the next level. With a stronger and more sensitive blank, Daemos detects those nearly imperceptible follow-bites during swimming retrieves, and drives thick-gauge steel home for decisive hooksets.

Javelin is designed for fast-moving search baits and burning, with a Medium-Fast taper tuned to absorbâ€”then quickly pin and controlâ€”those key reaction bites. With ample power to set the hook at the end of a long cast, Javelin’s smooth-bending blank also responds dynamically to load, absorbing surges from hard-charging fish to keep those finicky trebles securely buried.

The Destroyer ® FMJ harnesses the full potential of our proprietary Hybrid Graphite System and multi-axis construction, delivering a unique blend of sensitivity and power to take jig fishing to new heights.

FMJ transmits contact and composition in sharp clarity, Japanese carbon transmitting even the subtlest pickup bites and pecks. Showcasing a tip section designed with that perfect balance of stiffness/give to hop jigs out of danger of snags, FMJ is built to dominate the gnarliest structure, without sacrificing the ability to manipulate jigs with exact precision.

FMJ’s balance point is carefully calibrated to a palming grip, pivoting with the angler’s hand as the axis point. This reduces rod-work fatigue, while also positioning the angler to unleash fearsome hooksets at a moment’s notice.

The Destroyer ® Valdivia is first and foremost a frog rod, developed to give our touring pro’s every edge to dominate the mats.

Positive Hookset: Blank tapers to a subtle tip section with the perfect “give” for ambushing bass to take down their meals. Extra-Fast taper quickly transitions to the massively powerful mid/belly section upon hookset, driving thick-gauge hooks home. Valdivia’s entire blank responds dynamically to changing loads, keeping fish pinned under the heaviest mats until anglers can reach in to grab their trophy.

The Destroyer ® Warhammer is designed for devastatingly powerful and effortless punching applications in the deepest and darkest jungle mats. Leveraging Japanese carbon, a proprietary multi-axis build, and double-wrapped and double-footed Titanium SiC ® guides, Warhammer is built for all-day endurance punching.

With balance point calibrated just in front of the reel seat, Warhammer’s pivot point helps reduce fatigue from the repetitive motions of launching and controlling your punch rig.

With that rare combination of deceptive lightness, vast power, and poised balance, Warhammer is forged so you can outperform and outwork the competition.

Named after the Roman siege catapult, the Destroyer ® Onager was designed to launch large baits with impunity, and crafted for serious bigbait anglers.

Rear grip length is carefully tuned for two-handed “lever-casting,” and can be comfortably tucked under arm during retrieves, or used to brace throughout the fight of your life. Double-footed Titanium SiC ® guides are double-wrapped for durability and performance at key moments.

Onager proudly reflects the commitment of those who dedicate their life to “the one.”

The Destroyer ® Addermine is a master of light-line finesse applications. Supple, sensitive tip design offers subtle control, while detecting the most delicate of bites. Under increasing load, Addermine transitions with silky-smoothness, bringing the fight to the surprisingly powerful middle and lower portions of its blank.

For information about Megabass, visit MegabassUSA.com.