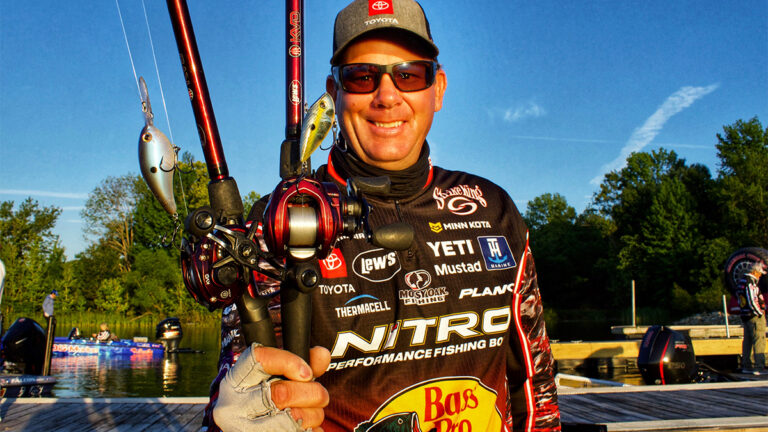 Competition is underway on Watts Bar Lake for General Tire Stage Five of the Bass Pro Tour. As Group A anglers were launching this morning at the Spring City Boat Ramp lots of comments regarding the “tough fishing” were overheard. Anglers’ expectations are set during their two days of official practice before the tournament begins and from the sounds of it, Watts Bar is proving to be quite the puzzle this week.

It’s worth noting that Bass Pro Tour competitors are notorious sandbaggers, and always find a way to light up the SCORETRACKER once “lines in” is called. This is especially true on the Tennessee River chain in the summertime, as most of the field spends nearly their entire practice idling with eyes glued to their electronics. Looking for schools of bass on offshore ledges, marking brush piles and other “deep” structure, often making little-to-no casts on their best areas until the tournament begins.

But when Team Toyota pro Kevin VanDam started pulling out several rods rigged with shallow-water presentations as his boat official backed his Tundra down the boat ramp, I realized this might not be your typical TVA tournament in June. While KVD hails from Kalamazoo, Michigan he’s earned the title of “honorary Tennessee River resident” throughout his career.

VanDam has literally won millions of dollars throwing deep diving crankbaits like a Strike King 6XD on offshore ledges up and down the Tennessee River over the years, and has taught a generation of anglers how to effectively fish these places in the process. We asked KVD to weigh in on Watts Bar and as you’d imagine, seeing “Dr. Crankenstein” rigged mostly for shallow water proved very telling.

Q – Will this tournament be dominated offshore like we would typically expect on the Tennessee River in the summertime?

KVD – “No, not in my opinion,” VanDam said. “I am going to mix it up, fishing offshore about 40% of the time and shallow the other 60%. Practice was pretty brutal on me, and while I did catch a couple out there (offshore) most of my bites came shallow. There are plenty of docks, laydowns, and some milfoil here which really opens your options the first week of June.”

Q – What is one similarity, and one difference, between Watts Bar and the other more familiar Tennessee River fisheries?

KVD – “One thing Watts Bar has in common with Kentucky Lake or Chickamauga or Guntersville is it has grass, milfoil specifically,” VanDam said. “Grass is one of the things that makes all these lakes so healthy. One big difference is Watts Bar doesn’t have nearly as many “flat ledges” as the TVA lakes south of here do. This place sets up much deeper and has more of a highland reservoir feel to it.”

Q – Do you expect Watts Bar to fish small this week, due to the lack of expansive offshore areas?

KVD – “Even though it doesn’t get the attention as the rest of the TVA chain, Watts Bar really is a good sized lake, so with our small field I don’t think guys will be stacked on top of each other,” VanDam explained. “There is a big St. Judes local tournament going on today that launched before our group at 6:00A.M. This weekend we might have to deal with some crowds, but I expect guys to be spread out for the most part.”

Q- What will be your target weight for day one of competition?

KVD – “Man, if I can catch 12-pounds a day I will be happy,” VanDam said. “I know that doesn’t sound like much, and this place is full of fish, but I just didn’t catch very many scoreables throughout practice. If this was a striped bass tournament I’d be shooting for 100-lbs. a day, this place has some giants of that flavor!”