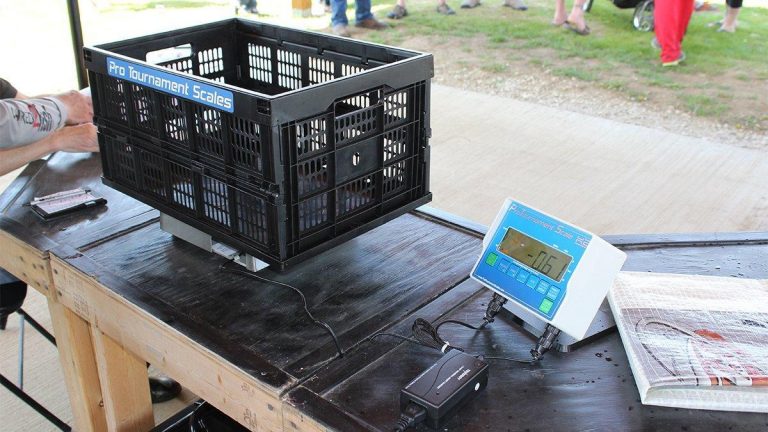 Accuracy is the key when weighing fish and money is on the line. No matter the conditions, anglers want an accurate measurement of their catch and cutting corners is not an option whether fishing for bragging rights, a club tournament or at the professional level. I cannot tell you how many tournaments I have seen or participated in where a hundredth of a pound separated the top place and second. The key is being able to accurately weigh the catch and not have the scales jumping back and forth.

I recently got to test a set of H2 Pro Tournament Scales from Franklin, Indianaâ€™s ATC Industries and these are the best and most accurate tournament scales I have ever used.

We recently completed work on an open-sided weigh-in pavilion at Evergreen Lake in Illinois called the Sam Leman Pavilion; it will also be used for other lake events but the idea was born as a result of high school fishing taking hold across the country and having something better than the tailgate of a pick-up or a folding table under a tent. Since 2007 we have weighed in the rain, the back of a construction trailer and stood in adverse conditions more times than I want to count. Not anymore.

The project was funded by Sam Leman Automotive, the McLean County Sportsmen, Friends of EverBloom, a few local donations and area anglers did the work. Although quite an undertaking and a big effort, that is only part of the story.

It was completed in time for this yearâ€™s Illinois High School Association Sectional Championships where the top three highest facing teams qualify to fish at the State Tournament. Illinois was the first state in the country to sanction high school fishing as a sport through their state association. Other states have picked it up including Missouri, Kentucky, Texas, Florida, Alabama and the Carolinas and more are on the way.

The Sam Leman Pavilion is state of the art and work is underway for more concrete padding, lights, water, and a stage but right now allows for drive-through weigh ins flawlessly. This event marked the first of many larger tournaments and activities moving forward. Although trees were planted to block Illinois winds they have not matured to a level to slow down winds off the lake and this is where the Pro Tournament Scales come in.

Although the weather cooperated at this yearâ€™s event with sunny conditions the winds were out of the west at 15 to 25 miles per hour. Our old set of scales, although digital, jump around with wind. Accuracy of those scales can take several minutes to lock and the use of wind blocks of anglers and trucks are the rule versus the exception during windy days.

The cool part of the Pro Tournament Scales is the wind is no match. They accurately weigh and lock that weight no matter how windy it is due to dual harmonic filtering built into the scales. Within 5 seconds the scales lock the weight and illuminate on both the weighmaster monitor and a wireless digital read-out that can be put on a provided tripod with the Deluxe model.

The H2 Deluxe model includes the H2 base system, a storage case, a 4-inch LED remote display and a tripod. The 10-inch by 10-inch base will accommodate all kinds of weigh tubs but we used the foldable weigh-in basket by Pro Tournament Scales and believe it is the best option.

The H2 is powered by both standard power and lithium ion batteries that last up to 20 hours of continuous use.

Displays are the key

In years past I got asked again and again to read the weights to the spectators and anglers and this year did not have a single request due to the digital LED display. Not only does it make the life of the tournament director easier but it keeps the spectators appraised of the weights of each team during the weigh in. A big plus with Pro Tournament Scales.

Even a novice tournament organization can set up and calibrate these scales in just a few minutes. A simple on and off button powers them up and placing the weigh basket and weigh-in bag on the scales and hitting TARE and you are ready to roll. The Deluxe system does not come with a printer but one is available on the Pro and Ultimate Systems. Multiple displays and tripods are also included in the Ultimate system.

The cost of these systems vary depending on features but a club or other tournament organization can get into a base system for around $1200.00. You can learn more about all of the offerings of Pro Tournament Scales by going to http://tournamentscales.com/.

Accessories like bump boards, baskets and stabilizer plates are available there too. A set of used and refurbished scales are on sale at their website and can be purchased for as little as $600 while supplies last. You can call Adam Clarkson at PTS at 1-800-445-5058 and get your set in as soon as 24 hours.

Tournament anglers may never purchase a set of scales but rest assured they will be concerned about scale accuracy and I would recommend Pro Tournament Scales over any other set I have ever used.