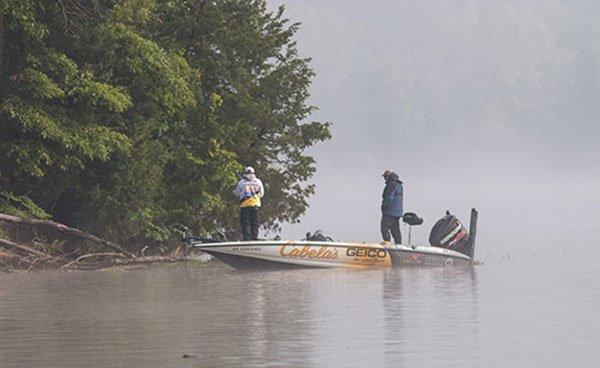 As the fishing pressure and temperatures continue to increase this summer, don’t underestimate the effectiveness of football jigs for bass fishing. Post-spawn, summertime bass can be a bit tough for anglers to figure out, but mastering this tactic is sure to produce some excellent action in the coming months.

Elite Series pro Mike McClelland is no stranger to the football jig and its many intricacies. In fact, it’s actually his go-to bait for most summer fishing scenarios. His success with this technique is well documented and according to the seasoned veteran, these tips will add a brand new dimension to your bass fishing arsenal.

Why choose a football jig?

Football jigs offer several distinct advantages throughout the summer months. As the bass make their annual migration to their deep haunts, McClelland chooses these often-overlooked jigs for three specific reasons.

“With the winter holding on like it did this year, the football jig bite will be extended for at least a month. I think you’ll see it producing great fish throughout the entire summer.”

Action—“Whenever you drag a football jig across the bottom, you’re also putting a lot of action into both the trailer and skirt,” McClelland said. “Think of it this way—when you roll a leather football on the ground, it’s impossible to predict its movement. It’s going to wobble all over the place and move around a lot—the same thing happens when you drag a jig with a football-shaped head. Traditional round-head jigs are predictable and it takes a lot more effort from the angler to make the skirt and trailer undulate as they should.”Size variation—“By selecting a different size football jig, you’re able to use them for almost anything you can think of,” McClelland said. “Lighter, 1/4-ounce football jigs skip like a pebble very easily, making them ideal for dissecting docks and overhanging bushes. The heavier, 3/4 to 1-ounce models are one of the most powerful deep water fishing tools an angler can possibly have.”Improved hookup ratio—“My hookup ratio with a football jig is astronomically higher when compared to traditional jigs,” McClelland said. “And that’s because they’re often made with lightwire hooks. These thinner hooks pierce the bass’ mouth very easily, resulting in solid hookups and less heartbreak. You don’t have to have a giant hookset, either.” 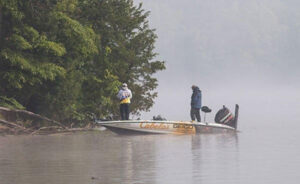 Bass fishing throughout the summer isn’t as random as many folks believe it to be. According to McClelland, the fish position themselves in very specific places and if you can follow their “reverse migration”, you’ll be ahead of the game.

What’s the best water clarity for football jigs? McClelland believes three feet of clarity is optimal, but has caught bass anywhere from one to 15 feet of visibility, so he always has one on his front deck in the summertime.

“There’s a lot of transitional behavior happening in the early stages of summer,” McClelland said. “But these post-spawn bass are going to use the same routes they used for their prespawn migration. They’ll stop in similar places, but in reverse order. If you can walk backwards through their prespawn routine, you’ll be able to catch a bunch of fish.”

Secondary points—“After the spawn concludes, I’m going to target the same secondary points on which they staged during the prespawn,” McClelland said. “Look for any points adjacent to shallow spawning areas, because the females will use these areas to recover and get healthy again.”Creek channel bars—“As the water continues to warm and the bass start getting back to their normal selves, they’ll start moving out toward creek channel bars,” McClelland said. “These are areas in which the channel of small fingers and pockets intersect with the main creek channel. It creates a high spot—some call it a bar—on which bass will school and aggressively feed. If I see this activity on my Lowrance, I know I can catch ‘em on a football jig.”Primary points—“The next natural staging areas in most fisheries are going to be primary points,” McClelland said. “These points extend into the main lake or river area and give those bass something they crave—easy access to deep water. They can feed on top of the points or slide off the ends of them when they’re not active. Big females are always looking to eat as much as they can without exerting much energy and these areas allows for that.”River ledges—“When the bass start positioning on offshore structure, you always want to look for anything that creates a different type of contour,” McClelland said. “It can be a high spot, a ditch or a small bend or cut in the river channel. These places are prone to have a hard bottom composition, making them a hotspot for football jigs.”

Like many bass fishing techniques, it’s important to differentiate your retrieve when fishing a football jig. McClelland primarily uses four retrieves depending upon environmental cues and fish behavior.

Angles are everything! Whenever he sees a group of fish on his electronics, McClelland casts at them from every possible angle, circling the entire area until he’s convinced they’re not actively feeding. He believes this is the biggest key to his football jig success.

Dragging—“This is the way most folks retrieve a football jig and it works really well,” McClelland said. “If the bottom is relatively smooth, I like to drag to the side when possible because I can feel more and keep better bottom contact. In areas with a gnarly bottom composition, I’ll tend to drag like I would a Texas rigged worm. This allows me to crawl it over the obstructions without many hang-ups.”Dead-sticking—“When the bass are just finishing up with the spawn, this can be an excellent technique,” McClelland said. “I’ll make a long cast and drag it like I normally would, but I’ll stop it for up to 12 seconds at a time. If you start out using a dragging retrieve and begin noticing your bites coming on the pause, try dead-sticking it for an extended period of time. It sounds crazy but it works!”Stroking—“If you notice suspended fish three or four feet off the bottom, never be afraid to stroke a football jig,” McClelland said. “I’ll start my rod at 7 o’clock and quickly bring it to 10 o’clock, before bringing it up to 12 o’clock. That second ‘pop’ is often the trigger, so follow the jig back to the bottom on a controlled slack line so you can detect any bites on the fall.”Reeling—“This is actually very effective when you’re around aggressive fish,” McClelland said. “Simply turn your reel handle fast enough to keep the jig kicking across the bottom, but slow enough to maintain bottom contact. A bite may feel a bit mushy or your line might just swim to the side, so make sure to stay focused.” 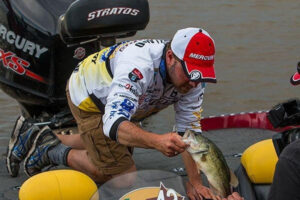 Complaints of poor hookup ratios are fairly common with football jigs, but learning and utilizing the proper hookset will make a monumental difference in your success rate. Sure, it’s a jig—but that doesn’t mean you have to have a monster hookset.

“Football jigs are very bulky,” McClelland said. “When you set the hook hard, that big piece of lead will force the bass’ mouth open and result in a lot of lip-hooked fish, which are very low-percentage. If you wind into the fish and let your rod slowly load, however, that lightwire hook immediately penetrates the roof of their mouths. More times than not, they’ll eat a football jig so well that they’ll actually hook themselves.”

Without a good feel of your football jig and the surrounding bottom composition, you’ll have a hard time detecting high-percentage hard bottom areas and delicate bites. For this reason, McClelland uses a simple system to determine the correct weight to use for each depth zone.

McClelland prefers a rod with a lot of backbone and a soft tip. Here are the rods he relies on for this technique:

Many anglers tend to overlook their trailer selection when fishing a football jig—if you’ve had success with a particular trailer style, it can be difficult to deviate from it. According to McClelland, however, you need to match your football jig’s trailer with the mood of the fish.

“When bass first start moving deeper after the spawn, they seem to want a more compact trailer with less action,” McClelland said. “So in the early summer, I like to use a Zoom Super Chunk or even a Zoom Fluke Stick. A lot of folks don’t consider using a stick worm-style trailer on football jigs, but they work very well. It may not look very pretty to the human eye, but you’ll catch a lot of bass this way.”

As the summer continues and the bass begin feeding more aggressively, he likes to use a trailer with a lot of action. As he crawls the football jig across the bottom, he wants his trailer to displace a lot of water in order to appeal to two primary senses—sight and feel.

“Whenever I’m moving my jig a lot, I use a Zoom Ultra Vibe Speed Craw or Zoom Super Speed Craw,” McClelland said. “Both of these trailers move a bunch of water which accomplishes two very important things—the bass can see them from far away and they can also feel the water displacement with their lateral lines. As they feel that trailer thumping nearby, they can’t help themselves.”

If he notices the bass striking his football jig on the pause, McClelland prefers a trailer that will move a lot without any added action from his rod tip.

“When the bass are sluggish and eating my jig while it’s sitting still, I like to use a Zoom Brush Hog or Zoom Baby Brush Hog as a trailer,” McClelland said. “Whenever you stop the jig, the appendages will still move a little bit. I don’t have to constantly pop my rod tip or impart action into the jig—the trailer will move on its own with the water movement and entice a lot of bites from lethargic bass.”

Although it may not look natural to us, McClelland is a big believer in using trailer colors different from his jig. For instance, if his football jig is green pumpkin-colored, he often uses a dark blue-colored trailer.

“By contrasting your trailer and jig skirt, you’re giving the bass a broader selection,” McClelland said. “If you have a little color in the water, I believe this strategy can pay big dividends. Whether you’re using a light-colored skirt and a dark trailer or a dark-colored skirt and light trailer, you’re giving the bass more options which, in my mind, increases your opportunities for a big bite.”

As the bass move deeper this summer, don’t let them get the best of you. If you put time into figuring out their migrations, pay close attention to environmental cues and select the right football jig colors, you’ll have a summer you’ll never forget. 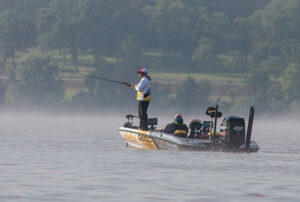