Humans are inherently vain creatures, what with all of our efforts to modify our appearances through countless enhancements, accents, accessories and other age-defying remedies. But while such tactics are typically optional for people, they’re often necessary when those people are trying to trick wary bass into doing something they’re not sure they want to do.

I recently discussed color modifications on fishing lures with Bassmaster Elite Series pro Gary Klein – an accomplished tinkerer, bait builder and quite the cosmetologist when it comes to creating appearances that bass can’t refuse.

Put it this way, the center storage on Klein’s Triton boat looks like a tackle shop merged with a beauty salon, or vice versa. Most noticeable is his collection of dipping dyes – 19 different bottles with at least a dozen unique colors.

No accident here. For Klein, it’s all about preparation – for big changes, as well as the modest stuff.

Klein, of course, packs the requisite chartreuse dye and there’s also a bottle of orange for those bream belly accents. The green pumpkin won’t surprise anyone, but blue, purple, red, yellow, brown, watermelon seed, black – now we’ve left the mainstream and crossed into a creek of creativity

We haven’t the space to comprehensively cover Klein’s complete cosmetic compilation, but hitting on a few highlights (pardon the pun) should provide sufficient inspiration.

Harkening back to an early influence, Klein explains the foundation of his color awareness:

“Early on, the big deal with Carolina rigs was throwing a green pumpkin or pumpkin seed lizard with a chartreuse tail,” Klein said. “That worked great, but my favorite was that same color bait with a blue tail or a black tail.

“Some people might say, ‘They’ll bite the chartreuse tail.’ But if I have 28 boats fishing the same spot and they’re all throwing Carolina-rigged lizards, I can almost bet you that 98 percent of them will be throwing a chartreuse-tail lizard. So, I just try to mix it up a little bit.”

Competing with other anglers defines the tournament scene in which Klein has excelled. Sometimes, competing with his own presentations is just as important.

“If I’m on a really good group of fish, and I’m catching them, catching them and catching them. Then the bite slows down. I’ll simply change my highlight color, and the bite usually picks back up for me.” 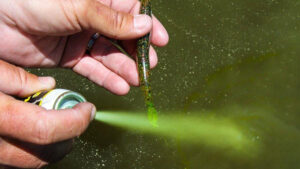 From the basic to the bizarre, with a lot of room for color combinations in between, there’s no exact science to the when or where of accent colors. Aside from matching the hatch (i.e. chartreuse tails), water clarity is usually the biggest driver of bait coloring decisions.

“Sometimes you just have to experiment with different colors to see what triggers the fish,” Klein. “That’s why it’s important to have (several) dye colors.”

Now, it’s easy to assume more is better; but Klein said he’s most likely to just hit the tips of a bait’s extremities – the pincers, the flappers, the claws, etc. In most cases, he’ll use the splash puddle in the dye bottle’s cap for a shallow application that just highlights those outer edges.

“I don’t like to overdo things because you can get too artistic,” Klein said of his generally conservative color application. “Bottom line is you have to have a lure tied on to make the cast and catch the fish.

“Typically, I don’t like to ever dip the whole tail of a bait in dye. Most of the time, I like to dip out of the cap; I hardly ever put things in the bottle. If you just lay the tip of your bait in the cap, you’ll have a really pretty highlight in the water.”

The exception would be those more pronounced forms like a ribbon tail, where a good inch or so of dyed area optimizes the bait’s naturally eye-catching contrast.

Klein likes swimbaits such as the Berkley Havoc Sick Fish for their pronounced downward angled pectoral and ventral fins. These appendages, he said, enhance the bait’s profile and give it a more distinct presence in the water.

“A lot of times, that presence is huge in making a bass react to a bait,” Klein said. “So, all I do is just highlight the outer tips of the fins with black. This just gives it more profile, more definition.

“In all types of water – clear and dirty – black has a really good contrast. For everything in the water, black is one of those natural colors and fish can see it from a long way away.”

Klein takes a similar approach to highlighting molded eyeballs, antennae and craw pincers with black, as well as other more vivid colors. Such design detail is often lost in off-colored water, but bump up the color delineation and the whole package pops.

“To me, it just gives the bait contrast in the water,” Klein said. “There are certain colors that just stand out – black, blue, red, purple, green.”

Another key spot for highlights, Klein said, is the lateral line. Many soft plastic swimbaits include a lateral line molded into the overall form, but those lacking prominent coloration present a great opportunity for enhancement.

“I like to add a little red or black to this line so it really stands out,” Klein said. 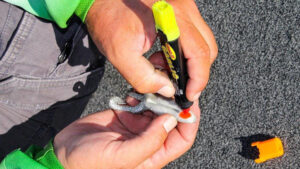 TOOLS OF THE TRADE

To keep all of his colors neat, orderly and accessible, Klein stores them in a plastic storage container about the size of a shoe box.

“I can’t tell you how many times I’ve spilled these dye bottles in the boat,” he said. “Keeping them in a box with a lid helps me avoid that.”

In addition to dipping sections of his baits, Klein also adds dyes with light strokes of a Q-Tip. The cotton swap works like a paint brush but in a pinch, the corner of a pinched shop towel makes a functional applicator.

“If you take all the cotton off the end of the Q-Tip and you just have the (hollow) stick, then that allows you to make a pretty good little dot on a plastic bait. You can get as creative as you want to be. – Gary Klein” 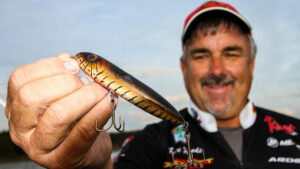 Make Your Mark – Strike King pro Luke Estel finds that even with high quality paint jobs, he still has occasional need to help his baits stand out more in periods of low visibility. A couple strokes with a permanent marker and he can transform his bait’s appearance without killing the basic color attraction. Dots, stripes, lateral streaks – doesn’t have to be anatomically correct, as long as it grabs a fish’s attention – or breaks up a profile in clear water. (Think splatterback patterns.)

Focal Points – A dash of red around a crankbait’s gill/throat area gives the appearance of living, breathing prey and often pushes an indecisive fish over the edge.

Along those lines, a splash of color can also subtly influence how a fish attacks. For example, bass pro Fred Roumbanis adds an orange or chartreuse dot beneath the head of his Gene Larew Three Legged Frog. With lots of action in those triple appendages, he wants to avoid short strikes from fish that try to bite the bait’s motor.

Similarly, Bassmaster Classic champ Casey Ashley always adds a red hook to the front position on his XCalibur Zell Pop to draw the fish’s attention to this attack point.

Hop to It – California Delta frog specialist Bobby Barrack uses various lines, streaks, dots, etc. to give his Snagproof frog greater appeal. Klein does the same. Again, it’s just something to break up the solid belly color and give the bait a more natural look.

Taking that a step farther, Klein will also use his dye kit to change the color of his frog’s belly if he thinks a chartreuse or watermelon tint would best match the local amphibians.

Notably, Klein advises anglers not to overlook the fringed legs of a topwater frog. Dying the tips and adding horizontal bands with a permanent marker gives the bait a more natural look.

Smell of Success – In a can or a marker pen, garlic-scented dyes offer other application options, while upping the game with additional sensory appeal. Louisiana Guide Darold Gleason often tips his flipping and dragging baits with Spike-It chartreuse dye spray.

“A little chartreuse on the tips of my soft plastics makes them stand out better in off-color water and then that garlic scent and flavor makes them hold onto the bait longer,” Gleason said.

Because these dips, sprays and markers occasionally yield a messy incident, keeping a rag or paper towels handy will help minimize the mess. Klein prefers baby wipes, but not just for attending to spills and smudges.

“I like the baby wipes for shining up the blades on my spinnerbaits and cleaning up my crankbaits,” he said. “They all get gunk on them and this shines them right back up.

“I don’t like to waste stuff, so instead of throwing away (dirty) baits, I just clean them up and continue using them.

With color accents, anglers can turn old baits into new baits and good producers into great producers. One or two more bites and one more enhancement to trip a big bass’s trigger can be all the difference in a good day and a great day on the water. 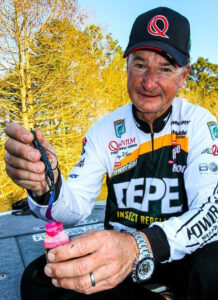