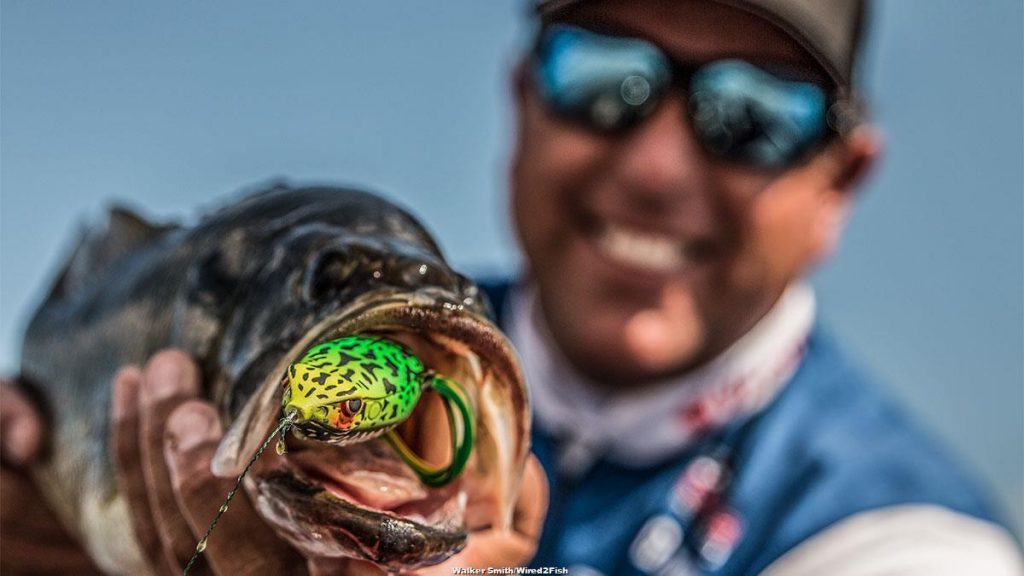 It’s nearly impossible to trump the adrenaline rush of catching a bass on a topwater frog. Whether it’s the bulging wake of a pursuing bass, the braided line screeching and squeaking as it cuts through vegetation, the monster hookset that buckles your knees or the explosion itself, one thing is absolutely certain—it consumes and captivates the minds of bass anglers throughout the country.

While you can expect this popular technique to produce big catches throughout other seasons, Elite Series pro and frog fishing extraordinaire Dean Rojas believes the spring months to be a near-perfect time to capitalize on the territorial behavior of bass and fine-tune your skillset.

In order to maximize your success, however, there are several critical factors to consider.

Why a frog and why now? 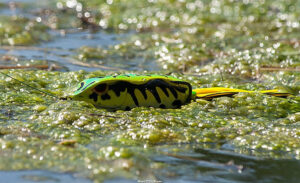 After an enduring battle with Old Man Winter, bass have two things on their minds as water temperatures begin to warm—food and romance. Topwater frogs exploit these weaknesses quite effectively.

Advantages of a topwater frog

Aside from the sheer excitement of an aggressive topwater strike, frogs offer several advantages that allow for efficiency and high-percentage presentations when targeting shallow, spring bass. 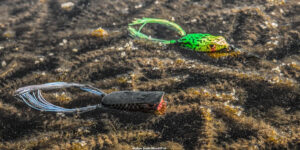 Similar to most bass fishing baits, there are hundreds of potential shape and color combinations to consider when choosing a topwater frog. While it might seem overwhelming to some, Rojas has developed a two-pronged system that allows him to quickly choose the best frog for particular conditions.

The first step of his process involves the body shape.

Once he chooses an effective body shape, Rojas’ attention turns to color selection. He makes a concerted effort to keep the process simple in order to maximize his fishing time. 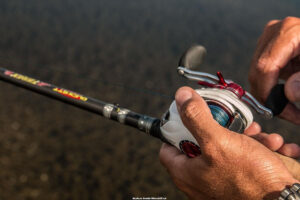 Sure—you can enjoy moderate success by simply casting and twitching a topwater frog. But in order to consistently catch shallow spring bass, close attention to your retrieve cadence can pay enormous dividends.

Fortunately, it isn’t as complicated as many anglers believe it to be. Rojas primarily relies on 3 specific cadences depending on the area and mood of the bass.

You’ve probably had this debate with your fishing buddies at some point. Once a big bass explodes on your frog, do you purposely hesitate for a half-second or set the hook right away? The conundrum has been around since the inception of frog fishing and Rojas has a definite preference.

“I hit ‘em as soon as I see ‘em,” Rojas said. “I do end up pulling it away from them at times, but that’s not always a bad thing. When they miss it, they’ll often open up a hole in the cover which gives you a specific target to make another cast towards—they’ll usually eat it again. I’d rather totally whiff on the hookset than halfway stick them and ruin my chances of fooling them again.”

A lot of things can happen when you’re setting the hook—your line can get wrapped around a pad stem, the bass can eat it upside-down and they can dislodge the frog before you even know what happened. So don’t get too upset if you swing and miss a few times throughout the day. According to Rojas, you’re doing well if you can catch 80 to 85 percent of your bites. 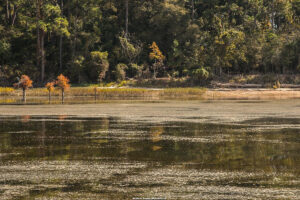 Truth be told, you can expect to catch bass on a frog around any type of shallow cover throughout the spring. As Rojas earlier explained, it’s an incredibly effective presentation when the conditions align.

For the angler who wants to take their frog fishing to the next level, however, Rojas suggests a few particular hotspots that have produced for him throughout the entire country.

Generic equipment can certainly be used for some bass fishing techniques, but frog fishing isn’t necessarily one of them. Because you’re often targeting relatively inhospitable areas, the proper gear is paramount. In order to make the most of your bites and have the ability to horse big bass out of the thick stuff, put away the spinning combos, monofilament and fluorocarbon line—it’s time to beef things up.

When the bass get shallow this spring, make sure to have a few topwater frogs handy. Not only is it one of the most exciting ways to catch bass, but it’s also ridiculously effective. If you can follow Rojas’ guidelines and dedicate some time to it, you’ll see what all the fuss is about.