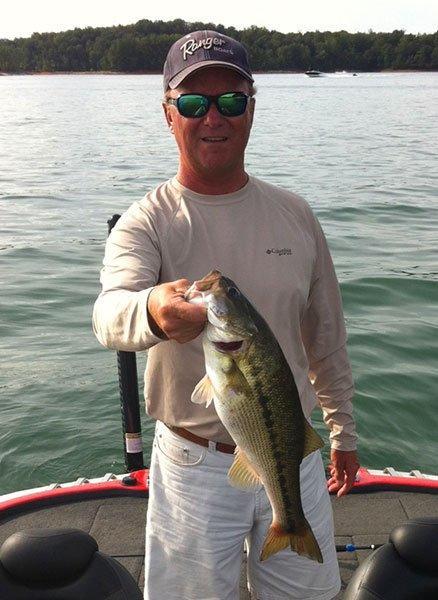 I met Forrest Wood Cup Co-angler Champion Colonel Tim Dearing back in 2007, while working as Editor for FLW Outdoors Magazine. At the time he was the Commander of the Tennessee Air National Guard out of Knoxville. He was at the event as a guest of FLW and the National Guard. Dearing liked fishing and went a bit with friends to get a break from the rigors of running a military division.

“That’s probably where this all started for me,” said Dearing. “I would tell my wife I was going fishing and she would sort of shrug her shoulders and not think much about it. But when I took her to that weigh-in she was so impressed by the FLW show and she turned to me and said, ‘I want to see you up there walking across that stage.’ I told her I was nowhere near that skilled at fishing.”

The bug had been planted though. FLW returned to Loudon in 2008 and Dearing took some FLW staff and anglers, including Brandon Coulter, on a mid-air refueling mission for an F22. A very cool experience for all involved. Operations manager Dave Washburn and Brandon Coulter whom Dearing had become friends with in 2007 both suggested he start fishing co-angler events on the FLW Tour.

“Meeting Brandon really helped me,” Dearing said. “I just approached him and asked if he’d ever taken anyone fishing and taught them the ropes. He sort of took me under his wing and that’s when I really found out how wet behind the ears I was about fishing. Brandon really got me off the bank and taught me how to fish other stuff besides Texas rigs. Things like Carolina rigs, jigs, drop shots and flipping and pitching.”

In 2010, Dearing managed to fish five FLW Tour events as a co-angler in between his full-time job. He finished 88th in the standings but never cashed a check. In 2011, he was only able to fish four events but he cashed two checks and was starting to turn the corner.

This year he fished all six events and cashed checks in four of the six events. Ironically enough, the two events he struggled in were clear deep impoundments where a drop shot was a key a bait — Hartwell and Beaver.  Beaver could have killed his chances of meeting his personal goals but that wasn’t the only tough part of the season.

He made a life choice this year as well. He has been in the military for 38 years getting his start in Kansas, then moving to Tinker Air Force Base in Oklahoma before finally settling in Tennessee in 2000. He was offered the opportunity to become a General. This is a very big deal. Very exhaustive and thorough background checks must be done on you and your family. Then it goes before Congress for approval before finally going before the President for approval.

Dearing endured the process for several months finally getting approved to be General. From there he would have to find an assigned position, likely in Washington D.C. The process was already taking a toll on him and he and his wife sat down one night and weighed the options.

“It really was my wife who got me to where I am today,” Dearing said. “She asked me if I was sure I wanted to do this at 57 years old. If I wanted the stress and work in Washington D.C. We were very happy living in Tennessee and it would be a hard move for our family. She suggested I take the time and focus on my fishing for a while because I never had really been able to do that being the Commander. So she ultimately convinced me that it was the best move for our family.”

Col. Dearing retired from the military and started focusing on his fishing. After meeting Charlie Evans and the folks at FLW in 2007, he went out and got a Ranger Z520 and would spend all his time before FLW Tour events practicing whatever technique he thought would be appropriate for the upcoming tournament.  He then travelled to each event with Brandon Coulter and Tom Spangler.

He fished with guys like Coulter, Ramie Colson, Jonathan Newton and with Terry Bolton for practice at the Forrest Wood Cup on Lake Lanier.

“The military really taught me some great skills that seem to help with my fishing,” Dearing said. “The first is goal setting. I learned to set reasonable and realistic goals. I do the same in my fishing. Last year my goal was to cash a check. This year my goal was to earn a top-10 finish and to finish in the top 50 in the standings to have a shot at the Forrest Wood Cup.”

Another skill that helps his fishing is observation. Being a pilot in the military, your keen awareness and power of observation mean everything, and  that helps him see what anglers are doing and then be disciplined to make the most of what he observes.

For this event, he believed it was going to be a drop shot dominated tournament, and it was probably going to be a grind. He called Tom Mann Jr in pre-practice and he informed Dearing he was already committed to helping Gary Yamamoto. Dearing convinced him to just meet with him one morning and just talk techniques and adjustments a co-angler could make fishing behind guys targeting deep spotted bass over isolated brush.

“I learned a lot from Tom Mann about color, leader lengths and how to  fish around the cover,” Dearing said. “He really helped me focus too on the fact that many fish would be spooked and roam out away from the cover, and that there would be more than one brush pile usually in a small area. I could use my drop shot as a search bait.”

Another key element to his drop shot success this week was his work as a camera boat driver earlier in the year. By the luck of the draw, he got paired with Brett Hite at Lake Hartwell where Hite and Ehrler worked together and dominated with deep drop shot bass in clear water. That’s where he really got his confidence with the drop shot technique.

When practice arrived, Dearing hopped in with Terry Bolton as him and Jonathan Newton were good friends. The first day of practice Dearing made an adjustment that some will say ultimately lead to his victory. He was getting bites that first morning with Bolton, but the fish were biting the tails off his Martens Morning Dawn Robo Worm. So he decided to focus them elsewhere.

“I had always seen and dipped the tails of my worms in chartreuse, but I wanted them to focus on the other end of the worm. So I started dipping the head in chartreuse, and I started hooking up almost immediately. By the end of the first day, I had caught a 14-pound limit from the back of the boat.”

Every fish he caught in the Forrest Wood Cup was caught on that chartreuse dipped Morning Dawn worm. The first day he caught a limit that weighed 9-6 before his pro partner Than Le even had a keeper. In fact he felt so guilty, he sat down for the last part of the day to make sure Le got his limit without him interfering — pretty humble for a co-angler.

The next day he really struggled when he drew Shin Fukae. Fukae is not only a great finesse angler but he also likes to stay way off the fish. So instead of getting right over the brush piles, Fukae stays back and casts to them. Dearing was able to cast his drop shot and drag it along until he found one piece of isolated brush and caught his one fish. That was off the tip Tom Mann gave him.

The final day, he drew Andy Morgan, and he caught four fish for 11-4. He was afraid he had lost it when a big fish bit in a brush pile and pulled drag before finally breaking his 10-pound Gamma fluorocarbon leader. He confesses he had not retied after catching the three fish in his livewell, and it cost him a big fish. He later caught a small keeper to give him four. But he figured that lost fish was going to cost him.

He fished with a heavier leader and a 1/2 ounce shiny drop shot weight. Something he figured out in practice.

“The bass were so deep you had to get it down to them quick and keep it there,” Dearing said. “I’m not sure but I think that shiny tungsten weight racing by probably triggered some roaming bass to come in for a closer look. I had the right color and the right size tackle for this week. I fished a pretty clean tournament. And I was calm because I was just happy to have made my goal of making the Forrest Wood Cup. I was going to get $2,000 even if I didn’t weigh a bass, so I had nothing to lose. That last day with Andy, we were cutting up and laughing and talking hunting and fishing. It was a ball.”

That’s what so many of us love about fishing. The less pressure you put on yourself it seems, the better you do in competitions. Sometimes one small adjustment makes a huge difference in catching and not catching fish. Adjusting to the cover and conditions and being observant to what other anglers miss can lead to rewarding days of fishing.

Dearing leaves Saturday for the FLW Tour Open on the Detroit River and is still considering his options and goals for next year.

“I haven’t had time to set new goals yet,” Dearing said. “I think it’s critical to have goals, but I’ve got to decide the best course of action for continuing on this path or moving to the front of the boat. I’ve talked with a lot of friends I trust in fishing, and I’m not sure I have what it takes or the confidence to move to the front just yet. For now I’m just enjoying the win and the moment.”