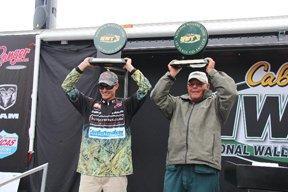 Pro-angler Kory Sprengel, of Beaver Dam, Wis., brought in a two-day total of 75.04 pounds of walleye to win the pro-angler category of the Cabela’s National Walleye Tour (NWT) event at Sturgeon Bay, Wisconsin. This is the angler’s second NWT tournament win of the season and lands him on top of the standings for the Lucas Oil Angler of the Year race heading into the championship.

NWT 7-29 low resAs promised, the NWT delivered an unprecedented boat and contingency payout. By winning the first-place prize and participating in the Ranger Cup, Mercury Marine and Angler’s Advantage programs, Sprengel won a total of $73,233.

After the first day of competition, Sprengel sat in third place with 39.80 pounds. Despite tough fishing conditions on the second day due to an overnight storm, Sprengel managed to bring in over 35 pounds of fish and seal the victory.

â€œA big front came through before the second day, dropping the water temperature,â€ said Sprengel. â€œI knew it would change the fish I had found. The biggest thing was the wind changed.â€

After a tough morning of fishing, Sprengel left in search of warmer waters. The decision paid off, as Spengler was the only pro to bring in a bag of fish over 30 pounds on the final day.

â€œI found a little bit warmer water and had my limit by 2:30 and headed in early,â€ said Sprengel. â€œIt was a good feeling to be coming in early considering how tough the conditions were.â€

Partnered with Sprengel on the final day, co-angler Harry Miller, of Bellevue, Iowa, won the $6,400 first-place prize for co-anglers. Although the angler has over 30 years experience fishing for walleyes, Miller took the opportunity to learn something from his pro partners.

â€œI can’t say enough about the two pros I fished with,â€ said Miller. â€œI probably got five to ten years experience in two day’s fishing with these pros. They were very polite and courteous. It is something I will never forget.â€

Due to family obligations, Miller isn’t sure yet if he will be able to compete in the championship event at Devil’s Lake, N.D., but was impressed with the NWT so far.

â€œI fished the Red Wing event in the spring as well,â€ said Miller. â€œThey really got the bull by the horns. It’s probably the best big fishing circuit going today.â€

â€œI would like to thank the staff at The Lodge at Leatham Smith and, in particular, Paul Meleen,â€ said Wright. â€œPaul was the consummate event host. We couldn’t have done this without him and we are looking forward to the next time we will be able to work with Paul again.â€

The next stop for the Cabela’s National Walleye Tour is the championship event at Devil’s Lake, N.D., Sept 19-21. Registration for the event will open August 5 and run through September 5. Anglers who are participating in any of the numerous contingency prize programs are encouraged to submit all pertinent information before the event to remain eligible for any potential bonus money.

For more details, anglers are encouraged to call 612-424-0708 or check out the new website at nationalwalleyetour.com. From here, site visitors can register for events, view the TV schedule and learn more about what’s in-store for 2013.