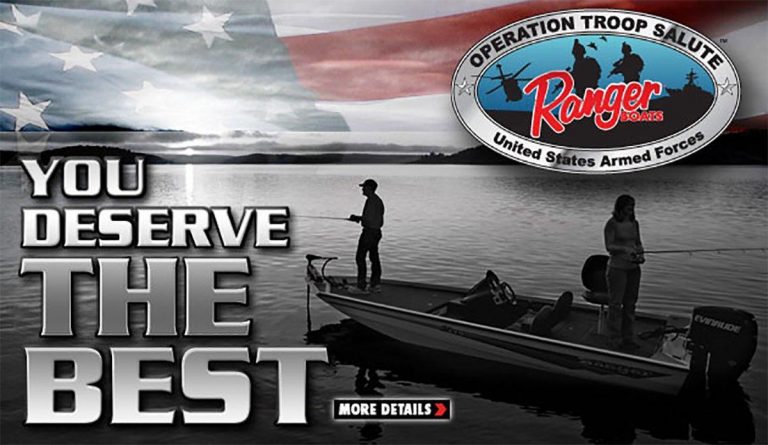 ? The qualifying Ranger boat package must be purchased from a participating authorized Ranger boat dealer.

? The qualifying Ranger boat package must be purchased between January 1, 2017 and December 31, 2017. It must also be delivered to the eligible purchaser within that timeframe. No rain checks or extensions will be allowed.

? The eligible purchaser must complete and submit to Ranger Boats an Operation Troop Salute Affidavit of Purchase within thirty (30) days of warranty registering their qualifying Ranger boat package purchased.

? No other Ranger Boat offers can be used in conjunction with this program, with the exception of the following retail promotions: 2017 Gear Up & Go, 2017 Reata by Ranger, 2017 Saltwater Series and 2017 RT/Deep V Bonus Offer.

? The Incentives are not redeemable for cash.

? The Incentives (factory rebate and clothing package) will be sent directly to the eligible purchaser approximately 3-4 weeks after Ranger Boats has received an Affidavit of Purchase

Ranger Boats will make all determinations regarding eligibility and satisfaction of requirements relating to this Program.

? NO EXCEPTIONS to this Program will be made.

A copy of this Program and the Operation Troop Salute Affidavit of Purchase can also be found at www.rangerboats.com. If you have anyquestions regarding this Program, please contact Matt Raynor in the Marketing Department at 870-704-2417 or matt.raynor@rangerboats.com