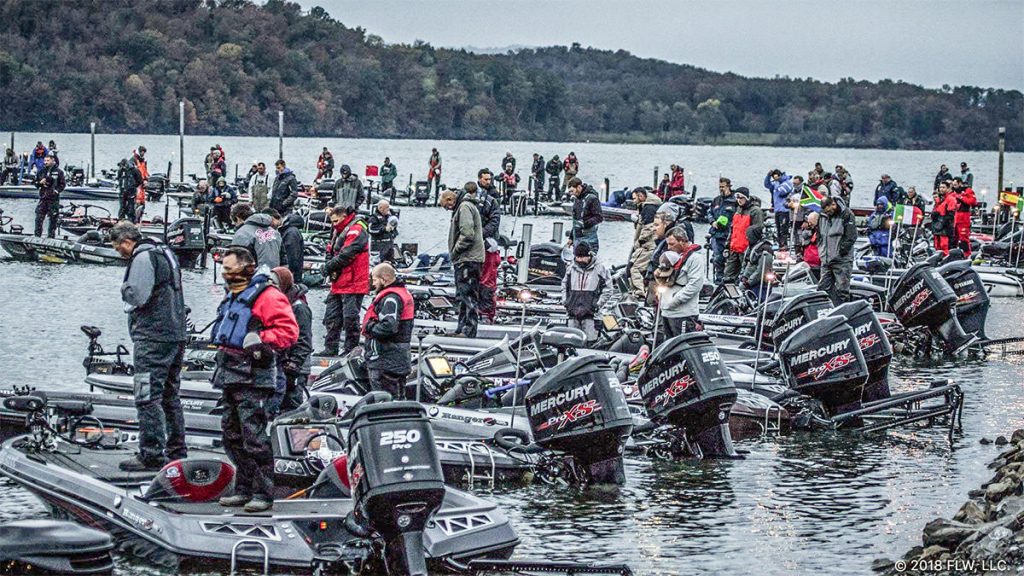 Fishing League Worldwide (FLW), announced today the full details, including rules, entry dates, schedules and the location for the 2020 Championship. The circuit will feature a field of 150 pro anglers competing across seven regular-season tournaments, which culminate to the FLW TITLE. A new event, the TITLE will showcase the top 50 pros from the FLW Pro Circuit regular season as they compete for an $820,000 purse.

The seven regular-season events will operate under a four-day, five-bass limit format with a full field of 150 anglers competing on days one and two. The field will cut to the top 30 on day three, and then the top 10 will advance to the championship round on day four. In the FLW TITLE, anglers will compete using the Major League Fishing catch, weigh, and instantly release format. The TITLE field will divide into two groups of 25 (Group A and B) whereas Group A competes on days one and three and Group B competes on days two and four. Based on the cumulative two-day weight total, the top ten from each Group (field of 20) will advance to day five. The top 10 pros after day five will advance to the sixth and final day of competition for the opportunity to become the inaugural FLW TITLE Champion with a top prize of $200,000.

The 2020 FLW Pro Circuit schedule, along with complete details, rules and payouts for the season can be found online at FLWFishing.com.

Each FLW Pro Circuit regular-season tournament will feature FLW Live on-the-water coverage with five cameras on the final two days. The FLW TITLE championship will feature live on-the-water coverage with 10 cameras on the final two days. Each regular-season tournament will also be featured in a two-hour television episode while the FLW TITLE championship will be featured in six two-hour episodes. Each episode will air on the Outdoor Channel and the Sportsman Channel in 2020 for a total of 312 hours of programing featuring FLW Pro Circuit anglers. Every weigh-in will be streamed live on FLWFishing.com.

FLW also announced that fans can apply for the 2020 FLW Pro Circuit Marshal VIP Experience beginning Friday, Nov. 22. Early registration for fans who participated as Marshals in 2019 is now open. A limited number of Marshal opportunities are available at each 2020 regular-season FLW Pro Circuit stop. If selected as a Marshal, fans will be treated to a VIP cookout and seminar with FLW Pro Circuit pros on the day before the tournament, plus behind-the-scenes access throughout the event. Marshals will also receive exclusive FLW Pro Circuit clothing and play a vital role in live coverage of the tournament by verifying the pro’s catch and relaying information to FLW editors. The Marshals won’t be fishing, but they’ll be in the middle of the action. It’s a VIP experience like no other for only $100 per tournament. Marshals can also win cash awards based on the combined weight of the pros they are paired with in the two-day opening round – as much as $2,500 at every tournament.

Anglers have qualified for the 2020 FLW Pro Circuit field of 150 pros based on the criteria outlined in the 2019 FLW Tour rules. Invitations will be sent to these anglers, and they will have until December 2, 2019, to pay their deposit and secure their entry. If an angler declines his or her invitation, FLW will extend an invitation to the next eligible angler from the 2019 FLW Tour standings.