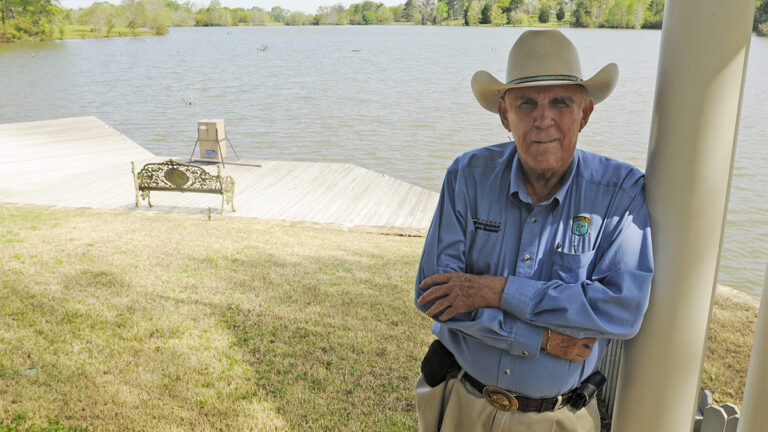 According to a Bassmaster.com article published just minutes ago, bass fishing legend and pioneer Ray Scott passed away late Sunday night. He died peacefully in his sleep of natural causes. If you’ve fished or followed bass fishing tournaments, you’ve likely heard of Scott and his wonderful and groundbreaking work in the industry. In 1968 he founded the popular Bass Anglers Sportsman Society (B.A.S.S.) which quickly grew and became the standard for bass fishing tournaments. These events became integral to the fishing industry as the participants were able to promote baits, boats, motors, electronics and the like. In 1972, he also required all competitors’ boats have aerated livewells to keep bass alive.

Dave Precht of Bassmaster penned the original article on Scott’s passing and storied legacy, which can be read here.

Our sincere thoughts and prayers are with the Scott family and Bassmaster organization. Ray Scott was and will remain an icon in this wonderful sport and industry.

Ray Scott passed away on Sunday, May 8 at around 11:30 p.m. He died peacefully in his sleep of natural causes. Scott was 88 years old.

“Our entire organization was saddened to hear about the passing of our founder, Ray Scott,” said Chase Anderson, B.A.S.S. CEO. “Ray’s passion and vision for bass fishing birthed our entire industry more than 50 years ago when he founded B.A.S.S. and started the first professional fishing tournament series. His legacy is felt to this day and continues to influence B.A.S.S., the world’s largest fishing membership organization, which he started in 1968. Ray’s contributions and impact on conservation and his advocacy and passion for anglers and our sport set the standard for tournament fishing and are something we will always strive to uphold.

“Our hearts and prayers are with the Scott family.”

The bass tournament competition Scott created rewarded anglers who caught the heaviest limits of bass in the three- or four-day events, which served as the proving grounds for rapid advancements in bass boats, outboard engines, fishing tackle, lures and electronics. Everyday anglers began purchasing whatever the bass pros were using, spawning a massive bass fishing industry that today has an economic impact in excess of $125 billion per year and employs more than 800,000 people nationwide.

Before Scott began pursuing his dream of organizing America’s bass anglers, the sport was a laid-back, mainly Southern pastime that was largely overlooked by the trout-focused national outdoor media. To serve B.A.S.S. members and to publicize the tournament trail, Scott launched Bassmaster Magazine, which the New York Times described as “the Bible of Bass Fishing,” and which ultimately would be delivered to 650,000 B.A.S.S. members monthly.

In 1984, he and then-Bassmaster Editor Bob Cobb created The Bassmasters TV show, which attracted more than 1 million viewers weekly on The Nashville Network. Aired today on Fox Sports, the program is one of the longest-running and most-watched fishing shows in history.

Not only did Scott help grow the sport of bass fishing, but he also did more than any other individual to preserve it.

In 1972, he debuted the “Don’t Kill Your Catch” campaign and mandated that all tournament competitors’ boats feature an aerated livewell to keep their bass alive.

“I didn’t invent catch and release,” Scott acknowledged, “but we did make it popular in bass fishing, and that changed the sport in so many ways. We preached that a bass is too valuable to be caught only once. We helped fishermen learn how great it felt to catch a 5- or 6-pound bass and then lean over and let it go and watch it swim away, hopefully to be caught again.”

As a result, the catch-and-release ethic caught on so well that more than 90% of all bass anglers today release all or most of the bass they catch.

Scott and his rapidly growing B.A.S.S. organization also crusaded against the industrial pollution of America’s waterways. In 1970 and ’71, Scott filed some 200 anti-pollution lawsuits, drawing national attention to declining water quality and contributing significantly to passage of the Clean Water Act of 1972.

He was an early advocate of bass fisheries research, and he campaigned zealously for passage of the federal Wallop-Breaux Sport Fish Restoration Amendment of 1984. When the bill stalled in Congress, Scott’s friendship with then-Vice President George H.W. Bush helped ensure enactment of the amendment. As a result, approximately $375 million in sportfish restoration allocations are provided annually to state fisheries agencies for management, aquatic education and public access projects.

Few individuals have had a more positive impact on boating safety than Scott. Early on, he began requiring tournament competitors to wear personal flotation devices whenever boating, and he convinced manufacturers to make emergency shut-off devices — “kill switches” — standard features on motorboats. In 1994, he was instrumental in passing the comprehensive Boating Safety Reform Act in Alabama, which became the first state to require that boat drivers pass a written exam and obtain a boat operator’s license.

The elder President Bush picked Scott as his Alabama state chairman during his 1979-80 presidential campaign, and the two remained good friends and fishing companions throughout Bush’s terms as Vice President and President of the United States.

Scott’s was a true rags-to-riches story. He was born in Montgomery, Ala., on Aug. 24, 1933, and grew up there during the depths of the Great Depression. His father operated an ice cream cart and his mother worked as a hairdresser to support the family, which grew to include Ray, his brother and three uncles — all living in a one-bedroom home. Scott contributed to the family treasury by delivering groceries on his bicycle, mowing lawns and selling peanuts at baseball games.

Scott suffered from dyslexia, which contributed to his having to repeat eighth grade, but he eventually managed to earn a degree in Business Administration from Auburn University and soon afterward became one of Mutual of New York insurance company’s top salesmen in the Southeast.

In recognition of his successes, Scott received the 2003 Horatio Alger Award, which honors the achievements of outstanding Americans who have succeeded in spite of adversity.

After a decade in the life insurance business, Scott had a vision that he might be the one to elevate the national profile of bass fishing to be, as he said, “on par with golf” and worthy of television exposure. That year, 1967, he quit his job and began organizing the first major national bass fishing tournament, the All American at Beaver Lake, Ark. The event was successful enough for Scott to begin holding tournaments at other reservoirs in the South and to launch B.A.S.S. and Bassmaster early in 1968.

His brainchild, the annual Bassmaster Classic world championship, grew from two dozen competitors and about that many spectators at Lake Mead, Nev., in 1971, to become the biggest event in sportfishing over the next half-century. Today, the Classic and related events such as the Bassmaster Classic Outdoors Expo record more than 100,000 fishing fans each year.

He sold B.A.S.S. to an investment group including his executive vice president, Helen Sevier, and other employees in 1986, but he continued to serve as emcee of the Classic for several more years. He later became a consultant and a popular spokesman for numerous companies in the fishing industry, and he launched a successful hunting industry enterprise to market deer feed and related products through his Whitetail Institute.

After a half-century of helping to grow and shape the sportfishing industry worldwide, Scott retired to his farm near Pintlala, Ala., where he remained mostly out of the public eye in the years prior to his death. He is survived by his wife Susan and his four children.