When discussing giant spotted bass in the southeast, a lot of the talk centers on the Coosa River. With fisheries like Jordan, Mitchell and Lay Lake making so much noise in the fishing world, there is often little mention of the Black Warrior River and the lakes that make it up. Don’t be fooled, however, the Warrior is a mecca for giant spots as well, and many experts believe it will be the location of the next state-record spotted bass.

The Black Warrior River is the largest watershed entirely in the state of Alabama. It’s composed of the Locust Fork or Little River and the Mulbery Fork which flows out of Smith Lake. Logs, rock bluffs, lily pads and pea gravel points present different cover to compose a diverse fishery. The Warrior has some current but nowhere near as much as the Coosa since its dams aren’t the primary source of hydroelectric power generation for the area.

One thing that does set the Warrior apart from the Coosa according to local expert and FLW Tour pro Kyle Mabrey is the lack of pressure. For years now, Mabrey has fished and competed on both Bankhead and Holt, the two northern most fisheries on the Warrior, and he can attest to the lack of competition over fishing spots. Unless it’s the weekend there are typically only a handful of people out enjoying these stellar fisheries.

“The Warrior is a healthy river system with a lot of bait, bass and little pressure,” said Mabrey. “The existing Alabama state record spot of 8-15 came from Smith Lake just above here, but a local fisheries biologist told me shock studies would indicate Bankhead holds the next state record.”

Every year during the transition from winter to spring, anglers fool giant spots feeding up for the spawn. In recent weeks several 6-pound-plus spotted bass have been caught and weighed in local tournaments held on Bankhead and Holt. Thanks to the five-headed monster that is the castable umbrella rig, the number of big spots caught this year seems a little higher than in years passed.

Mabrey has put his own spin on the umbrella rig, creating a version by hand that he believes to be better because it’s made up of stronger components.

“All the stuff I use for the rig you can find on my website, theyellowhammerrig.com,” said Mabrey. “We have the jigheads, swimbaits and line all in one place.” 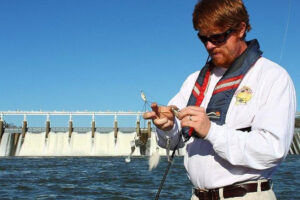 The Yellow Hammer Rig, as he calls it, produced several quality fish during our recent trip to Holt including several chunky spots and two giant 13- to 15-pound hybrid striped bass. Judging by the ferociousness of the fish and their body type, there is no doubt that the Warrior is one of the most fertile breeding grounds for giant spots in the whole southeast.

As to whether these bass are the exact same strain of bass that run the rapid waters of the Coosa is a bit of a mystery. Genetically they are very similar and there have been rumors that the Coosa strain of spots was introduced to the Warrior, but Mabrey believes them to be an inherent species to the region.

“I refer to them all as Alabama Spots because the Coosa is the Coosa and the Warrior is the Warrior but they are in both of them,” said Mabrey. “One things for sure, they aren’t Kentucky spots.”

Since the spotted bass spend most of their lives in the main river, anglers will discover the majority of the bigger ones on the Warrior there. Laden with channel swings, bluffs and boulders all along the main river run, the Warrior serves up great cover and staging locations for the bass.

As these bass move up in late winter early spring from their “sanctuary depths” of around 30-plus feet, they have only two things on their mind; full bellies and spring loving. This is why so many giants are caught just before the spawn.

“As they stage, I’ve seen some of the biggest ones caught,” Mabrey said. “The potential over that two or three week period to see a 7- or 8-pounder is highly likely especially with the rig out there now.”

If you choose to fish in one of the tail races during that feeding frenzy, you have to look for current breaks or the slack zones where there’s a seam in the current. The spots will also hang right on the bottom, right behind rocks and logs and down in holes.

In addition to the Yellow Hammer Rig, Mabrey will use a few other pre-umbrella-rig baits to unlock some of the bass from the current. Jerkbaits, topwaters and crankbaits are all good but one of his favorites is still the single swimbait. He rigs a 6-inch Basstrix Swimbait on a 3/4-ounce Buckeye J-Will Swimbait Head.

“I’ve had minimal success on heads bigger than 3/4-ounce,” said Mabrey. “It would be good if you were fishing in 30 feet of water but the 3/4-ounce jighead does just about all I need it to do in the shallower current.”

If you’re fishing further downstream from one of the dams, then the fish will set up on the upriver side of points and rocks. By positioning themselves in the face of the current they let the current bring the food to them. One of Mabrey’s baits of choice for this approach is a football head jig.

“I like to judge the weight of my jig by whatever it takes for me to stay in good contact with the bottom,” Mabrey said. “That contact indicates to me where the best places are to fish. With that jig I can tell if I’m fishing rock, gravel or just muddy bottom.”

The harder bottom is what you want to look for. Extensions of a point or the edge of a flat with a good hard spot are ideal habitat for a feeding spot readying itself for the spawn. Spawning spots bed a little deeper than largemouths so they are harder to see. Just like largemouth, though, they love to spawn on stumpy roots, so Mabrey will often work the edge of a flat for spots that are feeding and then work the entire flat looking for individual stumps that a spawner might be using. Spawners are easy to catch but hard to find on the Warrior, generally speaking.

Spots bed a little deeper so they are harder to see when they do spawn. He uses his graph a lot to try and locate areas with stumps or big rocks that are out of the current in about 4 to 8 feet of water.

“I rely a lot on my Humminbird this time of year to find the areas with the right bottom composition,” said Mabrey. “The spotted bass also spawn heavily on seawalls. There’s something they like about that 2 or 3 feet of vertical cover where they can have their back to the wall.”

Mabrey uses a topwater to locate the bedding spots and a shaky head or jig to pluck them off the bed if they won’t commit to the topwater. For the football jig, he uses a 734 Powell Rod. For the single swimbait it’s a 735 Powell and for the Yellow Hammer a 775. He uses Hi Seas 100% Fluorocarbon line and Hi Seas Grand Slam Braid. 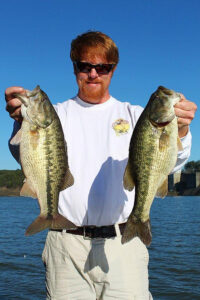 If you have the desire to tie into one of these giant Warrior River spots then make your way down to the river. There are several well-kept boat ramps that can be used to access the fishery and an abundance of quality fish ripe for the picking. Do to the abnormally warm winter that we have experienced here in the south this may very well be the spring when the state record is broken. Instead of being lethargic due to cold water, all these fish have fed throughout the winter and are now full of shad and eggs. Come get in on the fun this spring.